It’s true. Prices have been rising relentlessly since the Federal Reserve Act of 1913. We certainly have made the argument that inflation happens in paper money, but not in gold. I think most people believe that, despite the obfuscations of the diehard apologists for the Fed.

I think people care about inflation—but not that much.

What about the rich? This graph explains why the rich are not at all unhappy. 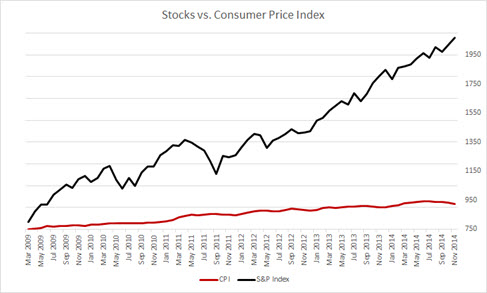 Their stock portfolios are going up at a much faster rate than consumer prices. I have scaled the CPI curve to the same proportions as the S&P index. If consumer prices had gone up by 2.8X, as the S&P did, then the two curves would match.

Astute readers will note that I cherry picked the start of the graph at March 2009. That was quite deliberate, as I think stock investors have a pretty short memory, possibly not even that long.

If this is it, if the argument for the gold standard is merely that prices are rising, then the wealthy would prefer we stay on the dollar system. It’s making them wealthier.

A few months ago, at the Shadow Open Market Committee meeting in New York, the keynote speaker put a sharp point on this. Richard Fisher, president of the Dallas Fed, was asked a question in front of a room where 99% of the people were in the 1% (the remainder were young, still working on getting that grant or planning to transition out of government and into an investment bank). The question was about the wealth effect.

“Yes,” he said wryly, “the wealthy have been … very affected.”

We need to make other arguments about the failings of the dollar, and the virtues of gold.