A Monetary Cancer Metastasizes in Europe

[VIDEO] «All Europeans are Seeing the Collapse Coming»

I proposed seven drivers of financial implosion in my dissertation. My recent writing has focused on two of them. One is the falling rate of interest on the 10-year government bond. As interest falls, the burden of debt rises. Since the falling rate incentivized more and more people to borrow, the number of indebted people, businesses, corporations, and of course governments is large. When the rate gets to zero, the burden of debt becomes theoretically infinite.

In the US, the downward trend is still in a deceptively mild phase (though there was a vicious spike down on Oct 15 to 1.87%). The rate on the 10-year Treasury is 2.3% today. In Germany, it is down to 0.82% and in Japan the metastatic cancer is much closer to causing multiple organ failures, with a yield of just 0.46%.

Two is gold backwardation, which has also been quiescent of late. Although it is worth noting that with these lower gold prices, temporary backwardation has returned. The December gold cobasis is over +0.2%).

I haven’t written much about a third indicator yet. What proportion of government bond issuance does the central bank have to buy? I theorized that when the central bank is buying all of the bonds issued by the government, that this is another sign of imminent collapse. I phrased it, as with the other indicators, as a value that is falling. Collapse happens when it hits zero, if not earlier. Here is what I wrote:

Bloomberg recently published an article about the Bank of Japan’s announcement of a new bond-buying program. Bloomberg presents two facts. One, the Bank plans to buy ¥8 to ¥12 trillion per month. Two, the government is selling ¥10 trillion per month in new bonds. This is an astonishing development.

The Bank of Japan will buy 100 percent of the new government bond issuance.

Popular theory holds that a currency’s value falls as the quantity issued rises. In this view, the yen falls as the yen supply increases. While admittedly not scientific, here are graphs of the Japanese yen supply and the price of the yen in dollars from 1970 through present. 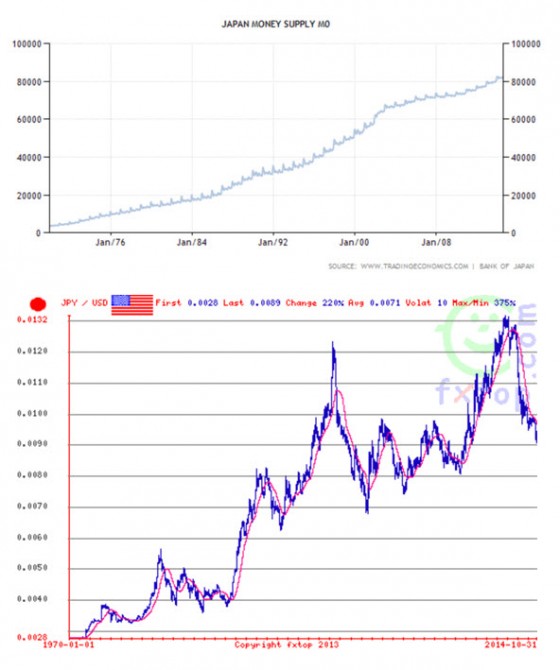 The yen has been falling since 2012, but not because of its quantity. It has been falling because the market is questioning its quality. One way to do this is to borrow yen, trade the yen for another currency, and buy an asset in that currency. This carry trade is equivalent to shorting the yen. So long as the yen is falling, and the interest rate on the bond in the other currency is higher than the interest rate paid to borrow the yen, this is a good trade.

What happens as the yen falls faster? Contrary to populist economics, it’s not good for Japanese businesses. However, it is a free transfer of wealth to those engaged in the carry trade. They can repay the borrowed yen at a cheaper and cheaper cost. When the yen goes to zero (which may take a while to play out), their debt is wiped out.

That’s what a currency collapse is. It’s a total wipeout of debt denominated in that currency. Since the currency itself is just a slice of debt, the currency itself loses all value. While on the surface it may seem good for debtors, it’s a horrific catastrophe. No one who understands the human toll, the cost in terms of the lives wrecked (and lost) would look forward to this with anything but dread.

The objective of my writing is to try to prevent it from happening. We need a graceful transition to gold, not an abrupt collapse like 476AD. It may be too late for the hapless Japanese. I hope it’s not too late for the rest of the civilized world.