I would discourage everyone from making too much out of the Chinese gold carry trade. It’s not a giant conspiracy to buy up all the gold, while suppressing the price. It is not some farsighted plan to anticipate the collapse of the dollar by owning hard assets. 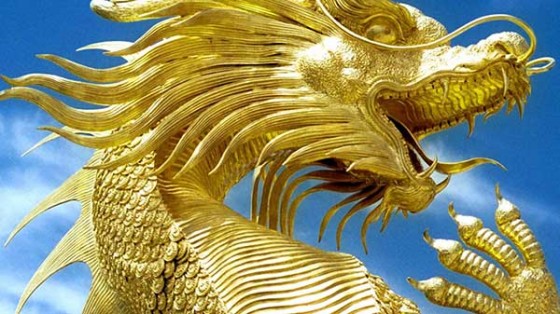 Zero Hedge has run an excellent article explaining the use of commodities, beginning with copper, to work around the Chinese government’s imposed capital controls1. Capital controls are intended to prevent arbitrage between the dollar interest rate and the yuan interest rate, which is much higher. To keep this gap open, and prevent the arbitrage—aka hot money—they have a choice to shut off trade with the outside world as North Korea does, or resort to capital controls.

The basic idea of capital controls is that the government thinks it can tell the difference between “good” and “bad” types of money moving in or out. As we’ll see below, arbitragers are clever and will do whatever it takes to make their transactions look like the “good” kind.

I describe one scheme used to work around Chinese capital controls, below. It’s complicated, and the details are a bit murky. I may even get them slightly wrong, but I am trying to paint the big picture in clear terms.

A Chinese company gets a letter of credit from a bank. With that in hand, it buys a quantity of copper. The copper is kept offshore or in a bonded warehouse, so there are no duties paid to import it.

Now the parent has dirt-cheap dollars on shore. The parent then takes exchanges those dollars for yuan. The company has onshore yuan, but is paying the dollar interest rate.

The offshore subsidiary is now sitting there in possession of copper. Of course, the company does not want to take the risk of a falling copper price. So they sell a futures contract. Many analysts and commentators use scare quotes around the word “hedging”. The implied question is: why in the world would anyone want to own a valuable commodity like copper and hedge it?!

There are two reasons. First, their balance sheet is denominated in yuan. If they buy something and its price as measured in yuan drops, they take a loss. It’s just like if you bought gold at $1800 and sold it at $1300. You could have kept the same gold, but instead you sold it and lost $500 in the buying and selling. When you use credit, you can be forced to sell even if you might otherwise want to hold on.

Second, there is typically a contango in commodities markets. That is, there is a positive spread between the spot price and futures contract price. For example, the Chinese company might have paid $3.30 per pound to buy the copper metal and simultaneously got $3.35 by selling a future that matures 6 months later. This 5-cent spread allows them to earn a small profit to carry the copper. I use the term carry quite deliberately, because they are warehousing it without really owning it. In 6 months they will deliver the copper (or potentially, roll the future to a farther-out date if desired).

Notice that there are two other spreads this company is straddling. It is long yuan and short dollars. If the dollar falls relative to the yuan (which it has until recently) this is another source of profit.

Finally, the very purpose of this was to straddle the yuan-dollar interest rate spread. If the cost to borrow for 6 months in yuan is higher than the cost in dollars (it has been and still is) then the company is profiting, in the sense that its cost of capital is lower than its competitors.

That is true, unless its competitors get in on the game also. By its very nature, this kind of game becomes very popular very quickly.

Now, the Chinese government may be cracking down on this. If they want to do that, they will have to rewrite their regulations to block this as a “bad” form of money flows. The new rules will work until financiers can develop the next workaround. The only surefire way to block unwanted but highly profitable activities is to block everything.

Chinese companies have been playing this game using copper for quite some time. More recently, they have been using other commodities including gold. This chart from Sharelynx shows a dramatic increase in imports into Hong Kong from China starting in late 2011, which suggests when they began to use gold.2 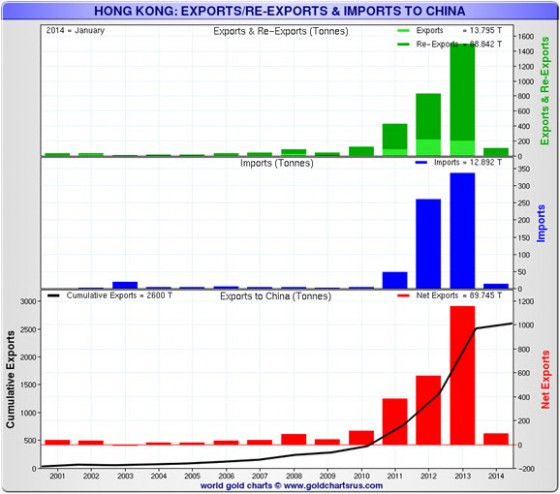 As with copper, they are using a commodity as a convenient way to work around an obstacle imposed by their government. They just want to borrow at the best interest rate. Gold works even better than copper, especially as it may have a more reliable contango once you get past the front-month. The fact of temporary backwardation is an added kicker. If the front-month goes into or near backwardation, the market offers you a profit when you need to roll to a contract farther out.

I would discourage everyone from making too much out of the Chinese gold carry trade. It’s not a giant conspiracy to buy up all the gold, while suppressing the price. It is not some farsighted plan to anticipate the collapse of the dollar by owning hard assets. Those who use credit to buy gold there are subject to the same challenges as those who do it here in the West. When the gold price drops, they are in a world of hurt unless they have hedged. With the yuan rising about 14% against the dollar from 2010 until the trend broke in February, the Chinese experienced an even bigger drop in the gold price than did Americans.

Why in the world would anyone want to own something that’s falling (as they reckon it) so far? And they do reckon it in yuan, just as Americans reckon it in dollars. For the same reasons. We’ve all been trained that all economic values are measured in dollars, and we keep the faith even when we know that the dollar or yuan or any paper currency stretches like a rubber band. We know that the dollar is manifestly unsuited to measuring value, especially over longer periods of time.

In any case, you can’t buy something that’s falling using borrowed money, not for very long.

These Chinese companies don’t own that gold. They are carrying it. They can’t keep it. Another term for carrying is warehousing. They are warehousing it. The buyer of that futures contract is the owner, though in most cases he’s just a speculator betting on the gold price using leverage. He hasn’t got the cash to take delivery.

As I discuss regularly in the Supply and Demand Report, it’s not a bullish signal for the gold price if the marginal use for the metal is to go into warehouses. In other words, the marginal buyer is a speculator trying to front-run hoarding demand. Eventually the speculator runs out of credit (willingness, if not access) and the price rally peters out.

Then the warehouse is no longer the marginal demand. It becomes the marginal supply. The carry trades unwind. Mechanically, this is: sell metal and buy a future. That would push the basis upwards.

In fact, that has been happening in the gold market. This new trend is quite different from the typical state, post 2008, for which I have coined the term temporary backwardation. Here is a graph showing the April and June gold contracts.

The action is most pronounced in the April contract, but June is moving in the same direction. Is it due to Chinese firms being forced (either by regulators or credit conditions) to unwind their carry trades?

The data itself does not tell us that. But it fits the hypothesis.

[1] Why does anyone think that a currency subject to capital controls can become a reserve currency?
[2] Bron Suchecki at the Perth Mint wrote about this in 2012: http://goldchat.blogspot.com.au/2012/09/chinese-imports-not-all-they-seem.html