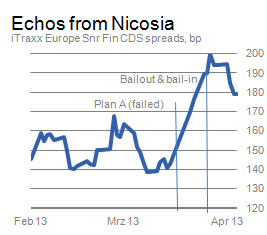 The bail-in of bondholders and uninsured depositors in the restructuring / winding down of the two largest banks in Cyprus combined with the introduction of capital controls has created precedents that may have an impact on the wider financial landscape in EMU. Indeed, the Euro Stoxx Banks subindex (as per Thursday evening) has dropped 12% (Stoxx50: -4%) since “Plan A”, which later failed, was revealed. CDS spreads of financials in Europe increased 36 bp (iTraxx Main +16 bp).

The new tough stance on bank restructuring has obviously spooked some investors in other EMU countries as well. Indeed, encouraging investors elsewhere to be more careful and discriminating when putting money into a bank was one goal of the exercise. Higher refinancing costs for banks, however, typically lead to tighter lending conditions. This would particularly affect weaker banks and the periphery and could add deleveraging pressure on firms. Even though Draghi and others insist that the Cyprus package is “no template”, this episode illustrates that investors have come to expect some sort of bail-in with future deals. While the aggregate effect so far is rather small – CDS spreads for European financials have already begun to tighten again – this new view may cause faster and stronger market reactions should financial worries emerge elsewhere, making stabilisation a more difficult task.