Washington, D.C., September 11, 2013 – Henry Kissinger urged President Richard Nixon to overthrow the democratically elected Allende government in Chile because his «‘model’ effect can be insidious,» according to documents posted today by the National Security Archive. The coup against Allende occurred on this date 40 years ago. The posted records spotlight Kissinger’s role as the principal policy architect of U.S. efforts to oust the Chilean leader, and assist in the consolidation of the Pinochet dictatorship in Chile.

The documents, which include transcripts of Kissinger’s «telcons» — telephone conversations — that were never shown to the special Senate Committee chaired by Senator Frank Church in the mid 1970s, provide key details about the arguments, decisions, and operations Kissinger made and supervised during his tenure as national security adviser and secretary of state. 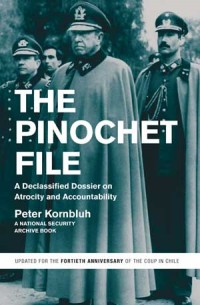 «These documents provide the verdict of history on Kissinger’s singular contribution to the denouement of democracy and rise of dictatorship in Chile,» said Peter Kornbluh who directs the Chile Documentation Project at the National Security Archive. «They are the evidence of his accountability for the events of forty years ago.»

Today’s posting includes a Kissinger «telcon» with Nixon that records their first conversation after the coup. During the conversation Kissinger tells Nixon that the U.S. had «helped» the coup. «[Word omitted] created the conditions as best as possible.» When Nixon complained about the «liberal crap» in the media about Allende’s overthrow, Kissinger advised him: «In the Eisenhower period, we would be heroes.»

That «telcon» is published for the first time in the newly revised edition of Kornbluh’s book,The Pinochet File: A Declassified Dossier on Atrocity and Accountability, (The New Press, 2013), which has been re-released for the 40th anniversary of the coup. Several of the other documents posted today appeared for the first time in the original edition, which the Los Angeles Times listed as a «Best Book» of 2003.

Among the key revelations in the documents:

At a special «Tribute to Justice» on September 9, 2013, in New York, Kornbluh received the Charles Horman Truth Foundation Award for the Archive’s work in obtaining the declassification of thousands of formerly secret documents on Chile after Pinochet’s arrest in London in October 1998. Other awardees included Spanish Judge Baltazar Garzon who had Pinochet detained in London; and Chilean judge Juan Guzman who prosecuted him after he returned to Chile in 2000.