‘B’ is for Bailout 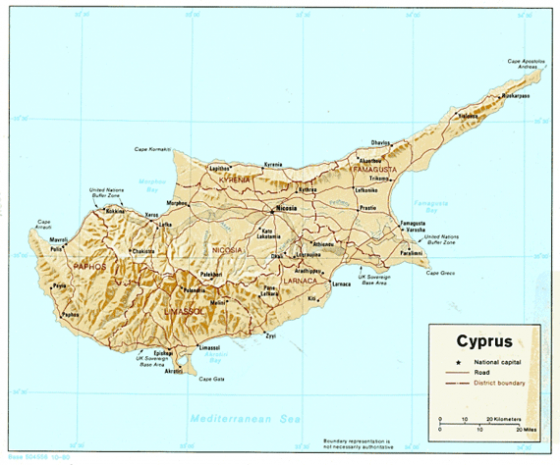 They have hit their savers with a grievous blow, and this will do irreparable harm to trust and confidence.

After markets closed on Friday, it was announced that Cyprus worked out a deal with the European Central Bank, European Commission, and the International Monetary Fund (“the Troika”). Here is a typical article reporting on the story.

Cyrpus has been in desperate need of a bailout, and was in discussions as early as June last year. They asked for an amount of money roughly equal to their annual GDP (for comparison, this would be about $15 trillion in the US!) The question is how did Cyprus arrive at this end of the road?

As the world now knows, Greece is unable to pay. Greece is now mired in so-called “austerity”, a package-deal of falling government spending, rising tax rates, and no relief from crippling regulations. The result has been falling tax revenues, rising unemployment and social unrest. Holders of Greek government bonds (and Greek bank bonds) have taken losses already and will take more.

I define inflation as an expansion of counterfeit credit. Bond prices may rise for a time, making participants feel richer. But eventually, all debt borrowed without means or intent to repay is defaulted, and this is deflation. Default can come in many forms, and the imposed loss on depositors in Cyprus is no less a default than other forms. Deflation is now imploding in Cyprus.

In the initial proposal, depositors in Cyprus banks are to be stripped of 6.7% of deposits under €100,000 and 9.9% of amounts over that. Electronic bank transfers have been blocked and cash machines have run out of cash. A bank run is the inevitable reaction to the threat of loss of deposits in a bank.

Subsequent to the initial story, news is now coming out that the Cyprus parliament has postponed the decision and may in fact not be able to reach agreement. They may tinker with the percentages, to penalize smaller savers less (and larger savers more). However, the damage is already done. They have hit their savers with a grievous blow, and this will do irreparable harm to trust and confidence.

As well it should! In more civilized times, there was a long established precedent regarding the capital structure of a bank. Equity holders incur the first losses as they own the upside profits and capital gains. Next come unsecured creditors who are paid a higher interest rate, followed by secured bondholders who are paid a lower interest rate. Depositors are paid the lowest interest rate of all, but are assured to be made whole, even if it means every other class in the capital structure is utterly wiped out.

As caveat to the following paragraph, I acknowledge that I have not read anything definitive yet regarding bondholders. I present my assumptions (which I think are likely correct).

As with the bankruptcy of General Motors in the US, it looks like the rule of law and common sense has been recklessly set aside. The fruit from planting these bitter seeds will be harvested for many years hence. As with GM, political expediency drives pragmatic and ill-considered actions. In Cyprus, bondholders include politically connected banks and sovereign governments. Bureaucrats decided it would be acceptable to use depositors like sacrificial lambs. The only debate at the moment seems to be how to apportion the damage amongst “rich” and “non-rich” depositors.

In Part II (free registration required) we discuss the likely impact to the markets outside Cyprus, such as the euro, the dollar, gold and silver, and the US stock market.