No Easy Fix for Gas Prices

That is some serious fracking volatility

Natural Gas may well be the story of the year. The volatility has spiked to levels never seen before. 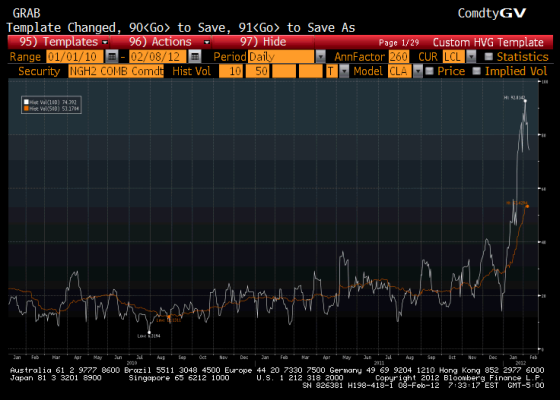 The daily swings are large. UNG, the ETF is almost comical to watch. 5% moves are pretty standard. Not only does it have the volatility of the underlying commodity, it has to deal with rolling futures contracts, creating additional volatility. Prices have cratered but volumes are increasing dramatically. 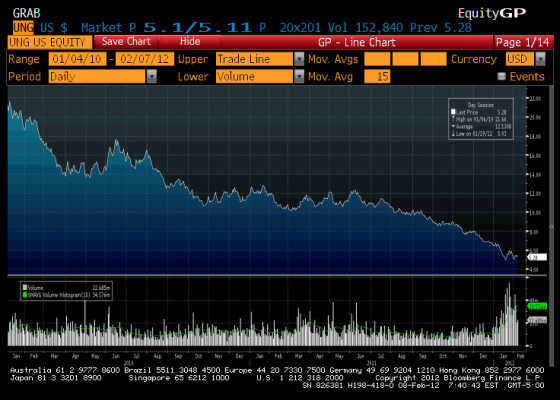 Natural Gas will be in the political spotlight. It has the potential to give America “energy independence”. Drilling for natural gas has been a big driver of job growth – real jobs with real paychecks. The environmentalists are lining up against it. Stories of tainted water supplies and links to earthquakes make the rounds.

If that wasn’t enough to keep nat gas interesting, some of the companies that drill it are starting to experience some credit concerns. Secured loans are tied to valuations of reserves and those valuations have plummeted with the price of nat gas. So we have a resource that is important politically, yet an industry that is starting to struggle at these prices. Small producers like CRK are down over 50% in a year and almost 20% YTD. Even CHK has seen its stock down more than 20% in a year, and seen its 5 year CDS spreads leak wider, from 250 last summer, to over 550 now.

CHK tried to put a floor on prices by announcing reduced drilling plans. And this is where it gets really interesting. The nature of shale deposits and horizontal drilling creates a much different supply profile than we see in oil (particularly with traditional wells). Some analysts estimate that production would drop 75% within a year if no new wells were drilled. That is a much higher drop-off rate than we see in oil. It’s not exactly like turning a tap on or off, but the companies that own the resources have much more ability to change supply quickly than many people believe. So far XOM has kept pressure on the little guys by not pulling back on plans in a meaningful way, but that needs to be watched closely.

So we have this resource is incredibly important to the country as a whole, where the companies that drill it are struggling to make money. Industries that can take advantage of this low cost, secure source of energy will do well (power generators, chemical producers, etc.). So long as drilling is going on, the makers of drilling equipment, the pipes that make up the well, etc., will do well, but they will be hit hard if low nat gas prices prompt the energy companies to slow down drilling.

There are a lot of moving parts, but the unprecedented volatility of natural gas prices cannot be helping anyone with their long term planning. With natural gas so universally hated (it seems like most analysts and funds are calling for further price declines) it is time to take a closer look from the long side. The big question is how quickly supply can be choked off, and will it be cut off voluntarily by strong producers, or decline as small weak producers can’t get the funding they need to continue to operate. Trading UNG rather than the futures adds an additional element of danger, but since everyone “knows” about the problems of rolling the exposure in the futures market, but few can calculate the cost of that, it is possible that the managers of the ETF are actually managing it well, and that investors price too much roll risk in, creating additional opportunities. As everyone is looking for “cheap” assets, selling some CHK CDS seems reasonable. It is a company that has been doing the right thing for years and getting paid 550 actually seems cheap, with some real upside.