This article originally appeared in El Confidencial in English, in the Daily Capitalist, and in ZeroHedge 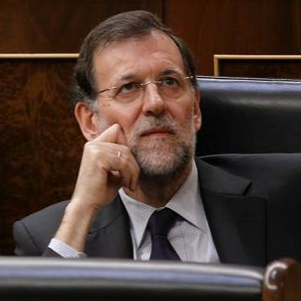 The debate on how to deal with false or misguiding campaign speech is neither new nor likely to be resolved soon, but as Europe’s economic crisis continues to deepen, and as social and political tensions rise, elemental questions of democracy once limited to seemingly distant European Union institutions are now spilling over to national governments.

In the case of Spain, broken campaign promises coupled with the notion that Brussels and Berlin may have de facto hijacked the national political process are seeding the ground for an imminent political crisis.

Indeed, Spanish Prime Minister Mariano Rajoy’s systematic adoption of policies that are in complete breach of the promises which took him to power only a few months ago are casting doubts on the legitimacy of his political leadership.

Political language … is designed to make lies sound truthful and murder respectable, and to give an appearance of solidity to pure wind. (George Orwell, “Politics and the English Language,” 1946)

The issue of adding checks and balances to political speech, or somehow raising the standards of society’s most pivotal decision-making process, is one that affects most democracies.

In the United States, the issue has even been addressed through the judicial system on several occasions, yet the constitutional right to freedom of speech in that country has thwarted most attempts to regulate political speech.

Penalizing false political promises, bringing more transparency to campaign funding, and preventing defamation and the use of manipulated data in political campaigns is a daunting task in what many consider to be the most advanced democracy in the world. Therefore, the subject remains open for debate while most professionals, from accountants and medical doctors to journalists and scientists, are measured by higher standards of accountability than the men and women running the government.

However, when foreign forces are seen as the cause for a nation’s elected officials to act against the will of the people – as it is now the case in Spain’s economic policy – the question of political legitimacy becomes a far more serious matter.

In Spain, a young democracy with a rather complicated electoral law, which also suffers from the vices inherent to two-party systems: political campaigns per se are quite meaningless in aiding voters to choose the more qualified candidate.

However, while there may be ways to improve a country’s democratic processes (by means of requiring specific information in campaign programs by law, for example) and even when electoral system reform is always present in Spain’s political debate (only no party in power has ever had the willingness to shoot its own foot), a new problem affecting Spanish democracy is surfacing at the worst possible time: the growing loss of sovereignty the single currency is causing on economically weaker nations in favor of the EU’s core.

The irony for Spain is that while its political leaders (on both sides of the dominating political spectrum) are keen on the concept of further European integration, thus to transfer national sovereign powers to an eventual “United States of Europe,” the current crisis, the constrains of a mangled monetary system, and a one-size-fits-all European economic strategy are already forcing such a transfer – without the citizen’s approval and in favor of undemocratic supranational institutions.

Europe’s financial crisis, its unfinished monetary union and the competing interests among its members are giving place to a new crisis of democratic nature where we now see how a country such as Finland may have more to say about the budget policy of the Spanish region of, say, Andalusia than Spain’s prime minister.

«You are masters at doing one thing and saying the opposite …» (Mariano Rajoy on Twitter, 7 November 2011)

Mariano Rajoy’s general elections campaign last autumn was simply an extension of his seven-year act as leader of the opposition: to continue to hammer the socialist government for its flip-flops and “lies” about Spain’s dire economic situation.

Although Rajoy’s campaign program was scant on details, he specifically promised to lead the country out of the crisis through a reformist agenda which would empower small businesses and entrepreneurs, limit the size of the government and lower taxes – an agenda which was neatly tucked inside PP’s “join the change” (súmate al cambio) campaign motto.

Rajoy’s promise of change did not last long, however, as it only took him nine days into his administration to break his promise not to raise taxes and less than seven months to put the final nail in the coffin of his entire political discourse.

Rajoy has fended off criticism for his own flip-flops by pointing to his predecessor’s “legacy,” namely, that the socialist government had lied about the country’s deficit, which in turn negated Rajoy’s own program (though Rajoy never followed through on such grave accusation by demanding any type of accountability from Zapatero, and actually decorated his predecessor as per tradition).

Similarly, Rajoy has also placed much of the blame for his U-turn on the Spanish 17 regional governments’ reckless spending (most of which his party now rules), as well as on Europe’s slow decision-making process.

Perhaps a more telling indication of Rajoy’s true motivation to act against everything he had promised may be found in his speech at the Spanish parliament last Wednesday.

Once Rajoy had outlined his government’s fourth package of budget cuts and austerity measures (repeatedly citing EU “recommendations”), he sentenced: “We do what we have no choice to do, whether we like it or not… [We] have reached a point where we cannot choose not to make sacrifices. We do not have that freedom. The circumstances are not generous.”

Quite a remarkable reversal from a leader who only a few months ago defended his country’s sovereign right to decide on matters of national budget controls and deficit reduction policies, and who proudly declared that it was he who had pressured Brussels into funding the bailout of Spain’s troubled banks.

To add insult to injury, as El Mundo reported on Saturday, while members of Rajoy’s government avoided specific questions about the new tax hikes which were made official at last Friday’s Council of Ministers press conference, a press release in English detailing unannounced additional measures was made available to the foreign press.

Calls for a referendum

While rival political leaders and the news media constantly point to Rajoy’s blatant U-turn (El País has put together a series of videos depicting Rajoy’s previous stance on the matter raising the value added tax), Wednesday’s €65bn austerity package has triggered open calls for a referendum on the government’s economic policies.

Upon Rajoy’s speech in parliament, the leader of the trade union Comisiones Obreras (CCOO), Ignacio Fernández Toxo, openly denounced Rajoy’s “democratic fraud,” demanded a referendum on the prime minister’s austerity package, and called for a massive demonstration on July 19.

Cayo Lara, the leader of Spain’s United Left (IU) party group, also raised the need for a referendum, and warned that the prime minister’s budget cuts and tax hikes were akin to “pouring gasoline onto the streets.”

Rosa Díez, co-founder of the rapidly-emerging social liberal party, Union, Progress and Democracy (UPyD), also blamed Rajoy for “fading the hope [Spaniards] had confided in him.” (UPyD is the political party which has brought the lawsuit against Bankia’s 33 board members, including former chairman and PP heavyweight Rodrigo Rato).

On his part, Socialist party (PSOE) leader Alfredo Pérez Rubalcaba said yesterday that Spaniards felt “cheated” by the Rajoy administration, and added, “[Rajoy] is doing the opposite of what he said.”

As we warned last week, the potential for social tension boiling over in Spain is great. The general population has thus far demonstrated a stoic stance on the continuous worsening of their country’s economic environment, as well as a rather contained attitude toward the corruption scandals surrounding the Spanish financial sector.

However, the latest budget cuts and tax hikes may push Spaniards over the limit, particularly as they begin to question their government’s legitimacy.

Should a political crisis unfold, Rajoy will not be able to put the blame on his predecessor’s “legacy,” but rather on his own broken campaign promises. All in all, the Spanish prime minister faces a seemingly impossible task: to assert his country’s sovereignty at the same time as he pushes for the diametric process of European integration that he believes will ultimately save the country.