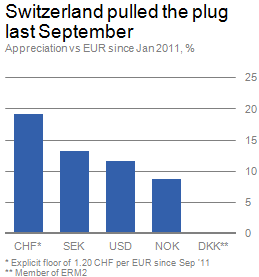 Ever since worries over the euro debt crisis started to escalate, many investors have sought refuge in Scandinavia and Switzerland which generally boast low debt-to-GDP ratios and high ratings. Their currencies have rallied up to 19% against the EUR over the last 2½ years and some market pressure built up recently on the Swiss FX-floor and Danish currency peg to the EUR.

Switzerland and Denmark had to intervene massively to prevent an appreciation of their currencies. The Danish central bank cut its benchmark rate twice in May and Swiss currency reserves soared by CHF 66 bn following FX interventions (Swiss rates were already very low). Yet, it seems unlikely that investors can force either the Swiss or the Danish to allow their currencies to appreciate. Both can draw on unlimited amounts of domestic currency to prevent that. While headline inflation will likely remain low, there is some risk that the monetary expansion will translate into higher asset prices.