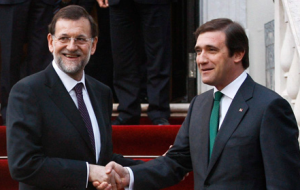 Spanish Prime Minister Mariano Rajoy said yesterday that Spain “will do something similar” to that which has been done in Portugal, referring to the harsh austerity measures set in motion by the neighboring country over the past year, underlining that “we’ll have to make difficult decisions to achieve sustained growth and stability.»

Rajoy also said that the IMF’s forecast for an economic recession in Spain this year (the institution’s Spanish GDP outlook for 2012 is -1.7% and -0.3% for 2013), as well as the likelihood of a greater than expected deficit, represent an «incentive to continue doing our homework and work with courage.»

Rajoy is expected to announce a new round of fiscal adjustments and structural reforms next March.

While the official figure will not be confirmed until next month, Rajoy’s government has already stipulated that it expects Spain’s 2011 deficit to be “around” 8% instead of the 6% EU-accorded objective. Spain’s deficit reduction commitment to the EU for the current year is 4.4% (the IMF projects a 6.6%). Despite comments made by Budget Minister Cristóbal Montoro that Spain might seek a revised deficit target from the EU, Rajoy insisted tonight that, “for now,” the government intends to adhere to the 4.4% target.

Rajoy is doing an “all in” bet on austerity, and, by extension, on the EU’s and the ECB’s capacity to backstop his sweeping policies by keeping the country in the credit markets until Spain weathers the storm. However, given the EU’s track record in dealing with the euro zone periphery’s hardships, the potential for a Greek default and its unknown consequences, the current deflationary environment could turn a troubled economy in need of liquidity into one that is insolvent.

Although he has only been in office for a month, Rajoy has already authorized Spain’s first domestic bailout for the region of Valencia. Furthermore, Economic Minister Luis De Guindos declared last week that the central government would not allow any region to fail. Economic stagnation is pulling at the seams of the heavily indebted Spanish regions, which in the recent past of borrowed prosperity indulged in pork-barrel spending on colossal infrastructure projects. While municipalities find themselves unable to pay their debts – and even their payrolls for some – citizens, however, are growing alarmed about their future, as they see their welfare state in peril and unemployment surging (the OECD has forecasted Spain´s unemployment to reach 23.4% this year). Spaniards are also increasingly angry at the emergence of corruption scandals involving misappropriations of public funds by political officials from the two major political parties, and even by members of the long-revered royal family.

A difficult start and a grim horizon

The Popular Party’s (PP) sweeping victory in the Spanish regional elections eight months ago foretold that the conservatives would also replace the socialist central government in the 2012 general elections. The Socialist Party’s monumental defeat (they lost by a 10-point margin allowing the PP to control 13 of Spain’s 17 regional governments) coupled with a heightened euro zone crisis threatening Spain’s access to credit markets forced then President José Luis Rodríguez Zapatero to call early elections to take place before the end 2011. Also pressured by the European Central Bank’s call for stern action on Spain’s public finances, Zapatero secured an overnight constitutional reform that imposed a “golden rule” that would limit the country’s deficit by law (the limit in question would be established in agreement with the EU), in September of last year. In the midst of the euro zone’s most volatile period since the start of the crisis, these actions made possible for Spaniards to have – unlike the Italians and the Greeks – the opportunity to democratically elect a new government to lead them out of the storm. On November 20th, conservative leader Mariano Rajoy’s third attempt to become Prime Minister of Spain was a success, and his party’s victory translated into the PP’s most commanding majority ever in the Spanish parliament.

Despite harsh criticism for running a substanceless campaign, which hinged on an inevitable Socialist Party debacle, Rajoy made two solemn promises in public before taking office: Spain would «fulfill its commitments to the European Union» and, regardless the severity of the austerity measures the times required, he “would not raise taxes.” He broke the second promise nine days into his administration, as his government announced the second largest tax increase in Spain’s history. Considering Spain’s debt-ridden regional governments, a financial sector trapped inside the ruins of a collapsed housing industry, and a recession lurking ahead, the prospects for Rajoy to keep his promise to the EU are also grim.

If the IMF’s recessionary forecasts materialize – the Bank of Spain has released its own outlook citing a similar contraction (-1.5% GDP) – Rajoy’s fiscal adjustment for 2012 may amount to over 40,000 million euros. In addition to this, the urgent need to reform the country’s financial system, which holds an estimated 176, 000 million euros in toxic real estate assets, and Spain’s contribution to the European bailout fund show that the numbers are simply adding up faster than Rajoy’s economic team can count.

Rajoy has focused his center-right government on appeasing Brussels to effectively steer the country away from the loss of sovereignty currently being endured by Greece and Italy. At the same time, in becoming the EU’s most diligent and loyal partner, Rajoy assumes that securing Spain’s membership to the euro zone is the only viable path to economic recovery. As he begins to uncover the country’s dire economic reality, however, he may realize that such a path is anything but what he had expected, nor desired – and so may his electorate. Ironically, unless Rajoy’s bet to go “all in” on austerity is backed by Brussels and Frankfurt, Spain may not end up doing “something similar” to Portugal, but Greece.