«We have to trust that the rules will be respected» – Merkel 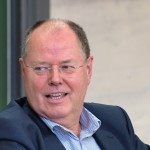 Today, Peer Steinbrück, former German minister of finance, announced that he will be running as the Social Democrats’ candidate for chancellor in next year’s federal election.

Peer Steinbrück enjoys the highest popularity among the SPD’s top echelons, which has been one reason for the other members of the so-called SPD Troika, party leader Gabriel and parliamentary leader Steinmeier, to step aside. The relevant party bodies will meet on Monday to decide over the further process, with the SPD party congress on Dec 5/6, 2012 likely to formally appoint him as their candidate.

Steinbrück’s candidacy will provide a serious challenge for Chancellor Merkel and her party. His popularity reaches into the traditional conservative electorate and he is seen by many as a credible alternative given his performance as finance minister during the financial crisis 2007/2008. Since he has re-stated on various occasions that he will not be available for serving in a grand coalition under Merkel once again voters will be forced to decide one way or the other.

Steinbrück might find it more difficult to convince his own party members to follow him. He is not undisputed, given his strong support for Germany’s labour market and social reforms in the past decade and his rather pro-business approach in economic policy. His proposals on financial regulation – presented this week – are much more in line with his party’s mood, though. However, an election platform integrating Steinbrück’s position and that of his party on various issues will be not easy.

Peer Steinbrück, the former German finance minister in the grand coalition of SPD/CDU/CSU between 2005 and 2009, has announced that he will run against Chancellor Merkel in the federal elections in September/ October 2013. While this point in time comes as a surprise – the SPD has insisted it will decide on this issue at the beginning of next year – the candidate himself does not. Steinbrueck has scored best against Merkel in terms of popularity compared to the other two members of the SPD Troika, party leader Gabriel and parliamentary leader Steinmeier, albeit still with a substantial gap to Merkel. Asked which person they would favour as chancellor, the latest polls rank Merkel at 53% and Steinbrueck at 36%.

Given his performance during the financial crisis 2007/2008 Steinbrück enjoys high credibility in the German public. His positions on various issues, however, do not necessarily coincide with those of his party. In some ways, his somewhat distant relationship with his party resembles that of ex-chancellor Helmut Schmidt. Thus, it will be interesting to see how far the SPD is willing to follow him on controversial issues and how far Steinbrück’s willingness to subscribe to populistic party positions will go. Some of his major political messages are:

Steinbrück’s candidacy is likely to shake up the political landscape in the run-up to the federal election in September/October 2013. Steinbrück made clear that he is not running to form a grand coalition but to oust Chancellor Merkel and her conservative-liberal government. While not known as an active supporter of an SPD/ Green coalition in the past, this might not be the only option for him to assume power. In long-term polling, the two camps (conservatives and liberals versus Social Democrats and Greens) are of similar strength, and both might well fail to reach a majority of votes in parliament. Therefore, the key alternative to another grand coalition is a “traffic light” coalition of Social Democrats, Greens and liberals (FDP) on the presumption of the liberals entering the parliament by passing the 5% hurdle once again. The long-awaited decision for a candidate should give a boost to the SPD which so far polls at 30% and its potential junior partner, the Greens, at 14%. Whether his candidacy will become a game changer and lead to a new government by autumn next year remains open, though.