After years of stagnation or decline, prices of residential real estate in Germany picked up markedly in 2011 (as in 2010). Single-family homes rose by an average 2.5% yoy and condominium apartments even by around 4%, i.e. considerably faster than inflation (2.3%). Probably the main reason for the increase in prices is the persistent uncertainty in the financial markets. However, there are a number of other factors contributing to this development which will probably support the real estate market over the next few years.

1. Positive labour market impetus: Low unemployment rates and a large number of people in jobs have improved German households’ creditworthiness and boosted their propensity to invest. One indication is that over the last few years consumers have become increasingly willing to make large purchases (GfK consumer climate).

3. Low household debt: In an international comparison, Germany’s households boast a low degree of debt relative to the country’s economic strength. Over the last ten years this ratio has even fallen, in contrast to the trend recorded in most other industrial countries. 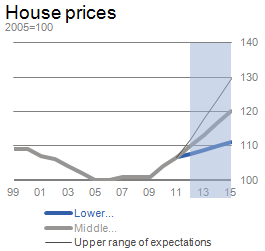 4. House prices attractive by international standards: Even though house prices have already dropped considerably, further declines are to be expected in many countries. Measured by affordability indices, residential property prices remain 50% above their long-term average in some countries, while in Germany they are extremely low by international standards. Also, German real estate is often high standard – compared with other countries – thanks to strict building regulations.

5. Capital retention over the past ten years: Nominal house prices fell by approximately 8% between 1999 and 2005 and then stagnated until 2009. Thanks to rising prices in the last two years investors have been able to at least retain their nominal capital since 1999. This could induce some investors to hope for a further uptrend purely for psychological reasons.

6. House prices historically low (chart 2): Measured by affordability indices, German residential property is priced 20% below its long-term average and this holds true in relation to both disposable income and current rent levels. 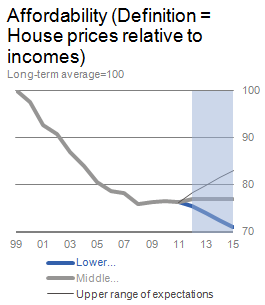 8. Major investors looking for alternatives: In an uncertain financial market environment with often poor risk-return profiles in the fixed-income market investors are on the lookout for alternatives. For institutional investors such as insurance companies, pension funds, sovereign wealth funds and funded social security schemes, the German housing market could prove an interesting option thanks to high volumes and low price volatility. Yields often exceed 5% and are thus higher than yields on many government bonds. Especially German insurance companies, which have to achieve yield targets laid down by law and whose share of real estate in their portfolios amounts to an average 3%, could decide that residential property represents an increasingly important asset class.

9. Real assets also popular with private investors: The uncertain financial market environment and latent inflationary concerns due to unorthodox monetary policy and the sovereign debt crisis are also raising private investors‘ interest in real assets. Even though there is a broad range of real assets, investors often focus on real estate.

10. Interest rates remain low: In light of the uncertain market environment and central bank activities, interest rates look set to remain at their historically low level across the yield curve. This means financing will remain cheap and the currently rather wide gap between yields and mortgage rates will persist.

The US and several euro-area countries have suffered from the effects of collapsing property markets for five years now. Is there a risk of a real estate bubble in Germany, too? Absolutely not – there are no signs of overheating due to credit-financed, speculative investment in the property market in the coming years.

Many areas of Germany’s property market are heavily regulated. Rent increases, for instance, must be conducted by means of strictly regulated processes and rents are linked to local average. So adjustment of average rent levels to higher prices in the property market always occurs with a time lag. As a result, rising prices will lower yields, and profits to be made from further transactions will decline.

In addition, residential property prices are likely to reflect the negative impact of changing demographics in less than 10 years’ time. Both the number of households in Germany and housing demand look set to decline. Many investors, especially institutional investors with a long-term focus and large investment volumes, take demographic developments into account when making investment decisions, so falling prices are often factored into the offers.

Further price increase of 3% per year expected up until 2015

Uncertainty in the financial markets, an improved labour market, additional demand in the construction sector for energy-efficient refurbishment and a number of other factors support our forecast of an ongoing uptrend in residential property prices. Given the regulatory environment, however, prices are likely to rise only moderately. For single-family houses we expect the increase to come to 3% per annum up until 2015 (forecast bandwidth +/- 2 percentage points), and a somewhat stronger development for condominiums. By historical standards and measured against disposable incomes, house price valuations thus remain cheap and there is virtually no risk of overheating even if prices increase by 5% per annum until 2015.