Fragile Things Have A Tendency To Break

Despite the overwhelming evidence that money printing doesn’t work, the Eurozone overlords will to do it anyway. 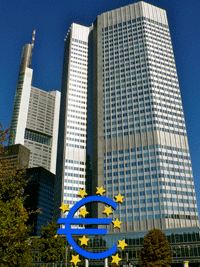 The European Central Bank (ECB) has decided to bailout its bankrupt members, mainly Italy and Spain, by buying their shorter-term bonds ( 1 to 3 years) with newly created money. The idea is to drive down their interest rates to alleviate their debt cost burden, and to send a message to the world (the financial markets) that they stand ready to back the euro.

There is a twist here though. The European Central Bank will seek to “sterilize” the funds it injects into the economy by withdrawing an equal amount of money from the economy. They do this by offering banks one week deposit certificates at the same rate as overnight money. Thus the idea is that this will effectively render the new money inflation neutral.

The head of the Bundesbank, Jens Weidmann, was the only nay vote for this new program, termed Outright Monetary Transactions (OMT) to distinguish it from QE. He is quoted as saying OMT is “tantamount to financing governments by printing banknotes.” Shmart fellow, he. It seems the Germans are the only ones in Europe who seem to understand what money is.

Here’s how sterilization works. The ECB will buy as many sovereign bonds as it sees fit to drive down short-term bond rates. It creates new money to buy these bonds from banks. The banks now hold a lot of cash equal to the ECB bond buys. At the same time the ECB will sell to the same banks one-week notes to suck up the same amount of new money it created for the bond buys. The net effect: the ECB has removed €x billion of sovereign bonds from the market. They have also removed the same amount of money from the money supply and these banks now own one-week ECB notes instead of 1 to 3 year sovereign bonds. If the ECB does this often enough it will drive interest rates down because bond investors know that they ECB stands ready, willing, and able to do this. Why fight the ECB (or the Fed)?

The obvious impact of this move will be to create joy among banks holding mainly Spanish and Italian debt. They have exchanged a risky asset for a more stable asset (ECB paper). Readers will recall that sovereign debt of any EMU country is counted as a Tier 1 asset for member banks. Thus Greek debt is equal to German Bunds in the regulators eyes. We all know that is not true and so do the banks’ depositors.

Because of the ongoing recession in most of the Eurozone, lending has shrunk, so banks aren’t doing much with their reserves anyway. According to this report, these banks are holding €770 billion in excess reserves. Now they will have even more reserves when the ECB get through with its open-ended OMTs. These could be another €640 billion of OTS purchases and these will no doubt also end up as sterilized excess reserves.

This creates a bit of a problem. For one thing, the balance sheets of banks for purposes of calculating reserves haven’t really changed by exchanging sovereign bonds for ECB notes. It is still Tier 1 capital and it will still be held as excess reserves. If loan demand kicks up, will the ECB be able to restrain its banks? We have the same problem here.

The other thing is that everyone knows that because there is no fiscal union, but only a monetary union, the Germans are the only ones with the money to finance the debt of its fellow profligate states. By giving Spain and Italy interest rate relief, the Germans are worried that their zeal for reform will wane and stick Germany with their bill. Think of it as a debt union rather than a monetary union. As Bundesbank head Weidmann said:

When the central banks of the euro area buy the sovereign bonds of individual countries, these bonds end up on the Eurosystem’s balance sheet. Ultimately, it’s the taxpayers of all other countries who are liable for that. In democracies, parliaments ought to decide on such a far-reaching mutualisation of risks, not the central banks.

Then what if Spain and Italy fail to carry out the agreed to reforms that condition the implementation of OMT? Let’s say they go along with massive bond purchases and, say Italy, fails to meet its conditions to funding? Would they then liquidate their bond portfolio and let the chips fall where they may? Not likely.

As Herr Weidmann said, this kind of bailout is ”too close” to central-bank financing of government deficits “with a printing press.” He is right; history has shown that this is a slippery slope as the Germans should know. This program will give little lasting relief to the Eurozone’s problems, and it may delay reforms as domestic political pressures could easily change the scenario. And I believe at some point they have three choices: allow countries to go bankrupt; dissolve the EMU; print money. My vote is for the latter. Of course the miracle of political and economic reform is a possibility if the Germans have their way, but don’t count on it.

Despite the overwhelming evidence that money printing doesn’t work, the Eurozone overlords will to do it anyway. Why do they do this? Monetary inflation is the last resort of governments who are over their heads in debt. Instead of going bankrupt (there is no way we or the overindebted Eurozone countries can repay the debt) they make the debt cheaper to pay off by inflating the money supply. It’s an age-old last resort of incompetent rulers.

What will Germany do?