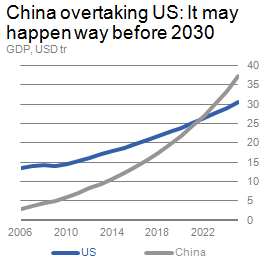 In a new report, the World Bank (WB) sees China becoming a high-income country before 2030, outstripping the US in economic size although its per capita income will still be a fraction of that in advanced countries. China could reach that milestone even if growth slows by only one-third of past levels (6.6% p.a. compared with 9.9% over the past 30 years). The key condition is that China must transition from policies that served it well in the past to ones that address future challenges.

It has been clear for some time that in order to ensure sustainable growth in the long term, China must spread its development to the inner provinces and the rural sector. This will unleash a large economic potential in terms of consumption and investment. The power of private consumption in a country with 1.3 bn people will also fuel growth in the rest of the world. The WB’s prescriptions touch upon strengthening further the market-based economy; promoting further provision of basic social protection; strengthening the efficiency of the fiscal system and integrating more closely with the global economy. The Chinese government has been taking these steps for several years. But implementation of these measures has had to contend with political realities or challenges from external risks. Thus progress has been uneven. Nevertheless, embracing the reforms espoused by the WB still seems the most likely course of action for China over the next decades.