BRICS group: More than the sum of its parts? 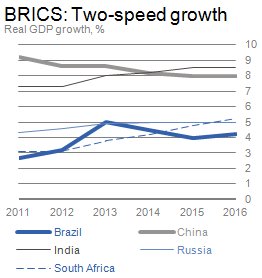 India hosted the 4th BRICS Summit (now including the “S”, South Africa) last week. The summit declaration included concerns about excessive global liquidity driven by industrial countries, pleas to solve the Iran issue via diplomatic means, and demands for the IMF quota reform to be implemented. It is easy to dismiss the BRICS summits as non-events. The countries are too different to think about the formation of a true “bloc”, and in some cases have outright conflicting interests (Brazil and the RMB policy, or China-India geopolitical issues). More importantly, they have as yet not articulated a common goal beyond, say, more representation on the IMF Board. Still, those summits are one more sign of the increasing global importance of these countries. While China is by far the largest member, each of the countries has competitive advantages of its own. The inclusion of South Africa (despite not being the 5th largest emerging economy, which is Mexico) is symbolic of the rapidly growing trade and investment ties of the BRIC with the African continent. For the period 2012-16 we expect real GDP in China and India to grow fastest (at 8.3% and 8.1% p.a. on average, respectively), followed by Russia at 4.9%, and Brazil and South Africa at 4.2% each. The share of the BRICS in global GDP (at PPP) will rise from around 25% currently to about 30% in 2016.