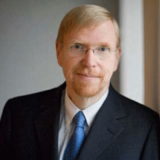 Although failing to meet the criteria for an optimal currency union EMU worked fairly smoothly during the first decade of its existence. In our view the reason for this was cheap credit, which substituted for fiscal transfers to economically weaker countries.

With the disappearance of cheap credit EMU 1.0 lacked an essential element compensating for its deficiencies as an optimal currency area. In principle, cheap credit from the markets could be replaced by government transfers from stronger to weaker EMU countries or ample central bank credit. However, we would consider a “transfer union” or an “inflation union” not as stable states of EMU.

This leaves in our view only two options for EMU 2.0: A hardening of EMU or a redrawing of the boundaries of EMU such that only countries meeting the real economy criteria for a currency union are members.

We expect EU governments and institution to do everything possible to retain an EMU with a large group of countries. This requires credible and irreversible adjustment in the countries in financial difficulties and an improved economic governance structure in EMU. Most likely, it also requires start-up funding from the EU level, including from the ECB as other facilities (e.g. IMF and EFSF) lack the necessary financial fire-power.

There is a technique in economics called comparative statics, where the change from one state of the economy to another in response to a change in some important exogenous parameters is analysed. We use this technique to derive scenarios of possible new states of EMU after the present crisis. We briefly sketch the state of EMU before the crisis, identify the change in exogenous parameters, and finally describe how EMU might look like in the future.

An EMU built on easy credit

Even if all countries did not even meet the nominal convergence requirements laid down in the Maastricht Treaty EMU was surprisingly stable during the first 10 years of existence. The reason for this was easy credit.

Robert Mundell argued in a path-breaking article in 1961 that fixed exchange rates among different economic areas require a high degree of labour market mobility (or, as was later pointed out, a high degree of real wage flexibility).1 Subsequently, Peter Kenen in a 1969 article pointed out, that fiscal transfers to some extent can make up for deficiencies in the real economy criteria for a fixed exchange rate regime (to which Kenen added a diversified production structure in each economic area).2 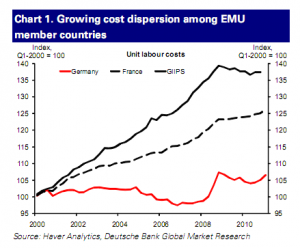 Although EMU met neither the Mundell nor the Kenen criteria when it was launched it remained remarkably stable for the first decade of its existence. Some observers have taken the view that this was due to a too rigid formulation of optimum currency area theory. After all, so a common argument, not even the US fits all the criteria for a common currency. We are not convinced by this explanation. Rather, it seems to us that EMU was sustained during its first decade by the ample supply of credit at very low cost. Cheap credit was a substitute for the fiscal transfers that would otherwise have been needed to compensate for the insufficient fulfillment of the Mundell criteria. Weaker economies could easily borrow to counter country-specific adverse developments (such as falling export competitiveness) and raise private and public consumption beyond the economy’s production capacity (see Charts 1-2).3 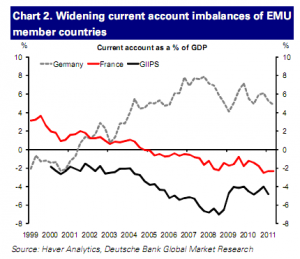 With the burst of the global credit bubble the reason for the smooth functioning of EMU, easy credit, disappeared and the deficiencies of the euro area in meeting the requirements for an optimal currency area came to the fore. A number of countries (notably Greece, Ireland, Italy, Portugal and Spain) had relied on cheap credit to fund domestic demand and neglected their international competitiveness. As a result, their unit labour costs rose strongly during the 2000s while those of Germany stagnated, and their current accounts recorded large deficits while that of Germany moved to a large surplus. With growth prospects dim and debt loads high these countries found it ever more difficult to access capital markets. The smaller countries, Greece, Ireland, and Portugal, were cut off entirely and had to request stand-by arrangements from the IMF. In response to this exogenous change in the “credit parameter”, EMU is now on its way to a new state. How could this look like?