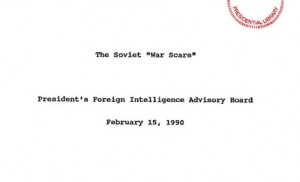 The newly released Soviet «War Scare» report – previously classified «TOP SECRET UMBRA GAMMA WNINTEL NOFORN NOCONTRACT ORCON» and published today after a 12-year fight by the National Security Archive – reveals that the 1983 War Scare was real. According to the President’s Foreign Intelligence Advisory Board (PFIAB), the United States «may have inadvertently placed our relations with the Soviet Union on a hair trigger» during the 1983 NATO nuclear release exercise, Able Archer 83.

Policymakers, and now historians have had vehement disagreements about the War Scare, leading some to describe1 the debate as «an echo chamber of inadequate research and misguided analysis,» and the CIA itself to downplay the danger in its 1984 review. This newly declassified PFIAB document, however, provides the strongest evidence to date that the danger of the War Scare was real, as the only study written with access to all US intelligence files on US/NATO actions and the Soviet response in the fall of 1983.

The Interagency Security Classification Appeals Panel (ISCAP), sometimes called «the secrecy court of last resort,» was instrumental in spurring the declassification of this document after the Archive’s initial 2004 request. ISCAP’s efforts helped break through the referral black hole that continues to prevent the public from seeing billions of other pages of documents locked in our Presidential Libraries. The George H. W. Bush Presidential Library also helped in trying to win this document’s release, but was continually stymied by an «unnamed agency» that would not allow the Library to perform a declassification review, despite that «unnamed agency» failing to complete its own review since 2004.[1]

According to documents reviewed by the Board and dissected in the declassified PFIAB report, by 1983 «The Soviets had concern that the West might decide to attack the USSR without warning during a time of vulnerability…thus compelling the Soviets to consider a preemptive strike at the first sign of US preparations for a nuclear strike.» To counter this strike (which the West never intended to launch), Soviet leader Yuri Andropov initiated Operation RYaN2, the Soviet human intelligence effort to detect and preempt a Western «surprise nuclear missile attack.»

Fortunately «the military officers in charge of the Able Archer exercise minimized this risk by doing nothing in the face of evidence that parts of the Soviet armed forces were moving to an unusual level of alert.» The decision not to elevate the alert of Western military assets in response was made by Lieutenant General Leonard Perroots while serving as Assistant Chief of Staff for Intelligence, US Air Forces Europe. The report describes Perroots’s decision as «fortuitous, if ill-informed» and states that «these officers acted correctly out of instinct, not informed guidance, for in the years leading up to Able Archer they had received no guidance as to the possible significance of apparent changes in Soviet military and political thinking.»

Perroots’s instinctual decision not to respond to the Soviet escalation in kind –an act until now unknown– may have been what ended the «last paroxysm of the Cold War,» the 1983 War Scare.

Declassified NATO and US Air Force documents have shown that the Able Archer 83 exercise included significant new provocative features, which could have been misperceived by the Soviets as preparations for an actual strike. These included: a 170-flight, radio-silent air lift of 19,000 US soldiers to Europe during Autumn Forge 83, of which Able Archer 83 was a component; the shifting of commands from «Permanent War Headquarters to the Alternate War Headquarters;» the practice of «new nuclear weapons release procedures» including consultations with cells in Washington and London; and the «sensitive, political issue» of numerous «slips of the tongue» in which B-52 sorties were referred to as nuclear «strikes.»

The PFIAB report reveals even more potential warning signs that could have been misinterpreted by the Soviets, described as «special wrinkles,» including «pre-exercise communications that notionally moved forces from normal readiness, through various alert phases, to General Alert;» and that «some US aircraft practiced the nuclear warhead handling procedures, including taxiing out of hangars carrying realistic-looking dummy warheads.»

The PFIAB report also shows that President Reagan learned about, and reacted to, the danger of nuclear war through miscalculation. After reading a June 19th 1984 memorandum from CIA Director William Casey describing «a rather stunning array of indicators» during the War Scare that added «a dimension of genuineness to the Soviet expressions of concern,» the president «expressed surprise» and «described the events as ‘really scary.'»

Months earlier, Reagan was already concerned about Soviet fears. A week after Able Archer 83’s end, on November 18, 1983, the President wrote in his journal, «George Shultz & I had a talk mainly about setting up a little in house group of experts on the Soviet U. to help us in setting up some channels. I feel the Soviets are so defense minded, so paranoid about being attacked that without being in any way soft on them we ought to tell them that no one here has any intention of doing anything like that.»

Towards the end of the War Scare, President Reagan asked his Ambassador to the Soviet Union, Arthur Hartman, «Do you think Soviet leaders really fear us, or is all the huffing and puffing just part of their propaganda?»

Six years later, after the Cold War had ended, the 1990 PFIAB report answered President Reagan’s question: «There is little doubt in our minds that the Soviets were genuinely worried by Able Archer… it appears that at least some Soviet forces were preparing to preempt or counterattack a NATO strike launched under cover of Abler Archer» and that «the President was given assessments of Soviet attitudes and actions that understated the risks to the United States.» According to the PFIAB, the US Intelligence Community’s erroneous reporting made the «especially grave error to assume that since we know the US is not going to start World War III, the next leaders of the Kremlin will also believe that.»

«The Board is deeply disturbed by the US handling of the war scare, both at the time and since. In the early stages of the war scare period, when evidence was thin, little effort was made to examine the various possible Soviet motivations behind some very anomalous events… When written, the 1984 SNIE’s [assessments]3 were overconfident.» That estimate, written by veteran Soviet analyst Fritz Ermarth, downplayed the hazards.

Rather than shy away from discussing and analyzing the danger of nuclear war through miscalculation, the Board, chaired by Anne Armstrong, and the report’s primary author, Nina Stewart, wrote that it hoped its «TOP SECRET UMBRA GAMMA WNINTEL NOFORN NOCONTRACT ORCON» report would prompt «renewed interest, vigorous dialogue, and rigorous analyses of the [War Scare]» – at least by the few cleared to read it!4

Finally, with the declassification and publication of the The Soviet «War Scare , the public can now read the most comprehensive and authoritative internal report available on the danger of nuclear war by miscalculation during the 1983 Able Archer War Scare.

The document contains several other revelations:

[1] The existence of this PFIAB report was first revealed by Don Oberdorfer in his book The Turn: From the Cold War to a New Era (Simon and Shuster: 1991), 67.

[3] The SNIE states, «We believe strongly that Soviet actions are not inspired by, and Soviet leaders do not perceive, a genuine danger of imminent conflict or confrontation with the United States.»

[4] At the time that this report was delivered to President Bush, the PFIAB included James Q. Wilson, John S. Foster, Jr., Bernard A. Schriever, Glenn Campbell, Gordon C. Luce, John Tower, and Chairperson Anne Armstrong. It has been reported that Nina J. Stewart was the primary author of this report. On February 15, she was the acting executive director of the Board. Before her role on the PFIAB she served as the assistant secretary of state for diplomatic security. After resigning from the PFIAB, she served as the deputy assistant secretary of defense for counterintelligence.

[5] Documents recently released by the Cold War International History Project show that the Soviets’ East Germans allies were highly skeptical of Soviet computing prowess, however. Past «Soviet experiences show us that a danger exists of computer application concepts not getting implemented,» snidely wrote Stasi foreign intelligence chief Marcus Wolf when he was informed of the Soviet’s efforts.

These materials are reproduced from www.nsarchive.org with the permission of the National Security Archive. Edited by Nate Jones, Tom Blanton, and Lauren Harper. For more information contact: (202) 994-7000.