Government Debt and Deficits Are Not the Problem. Private Debt Is.

The old joke is, “(with a Russian accent) In America, you correct newspaper, but in Soviet Union, newspaper corrects you.” Switzerland is now experiencing the bond market equivalent. In America, the government pays you to borrow but in Switzerland you pay the government. All Swiss bonds have a negative yield out to 9 years. Negative means you pay them to lend them your money. The 10-year Swiss government bond has effectively zero yield. For comparison, the 10-year US Treasury is 1.8%.

Here is a graph of the Swiss yield curve. 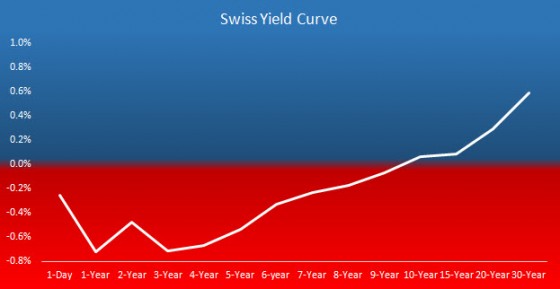 The interest rate in Switzerland—and in fact in most of the world—has been in a falling trend for decades. Many credit President Reagan and his Fed Chairman Paul Volcker with ending the massive inflation that plagued Nixon, Ford, and Carter. What they actually did in 1981 was spike up the interest rate, and set up the conditions for a falling rate that continues to this day, 34 years later.

A falling interest rate puts downward pressure on prices. I wrote about this in my theory of interest and prices, and recently in a short article. Reagan and Volcker may have ended one problem (I think it was an unsustainable trend that was coming to an end anyway), but they traded it for another. Monetary problems can exhibit enormous lags, so few understood it during Reagan’s time in office. Those early years of falling interest seemed good (well except for Black Monday 1987 when the Dow Jones Industrial Average fell 23% in a day).

At first, a falling interest seems like great fun. Where debt can be refinanced, a lower rate reduces the monthly payment by a large amount. New borrowing can certainly occur, with a lower payment. The net result is that it juices up a heckuva boom. The boom may seem like a strong economy, but it is actually destroying precious capital. In the later phases, the boom sours. One reason is that the capital destruction continues apace, but the effect on the monthly payment is diminishing. Every halving of the rate causes a doubling of the net present value of the debt (assuming all debt, in aggregate, is perpetual under irredeemable paper currency). However, the drop from 4% to 2% does not reduce the monthly payment as much as the drop from 16% to 8%. 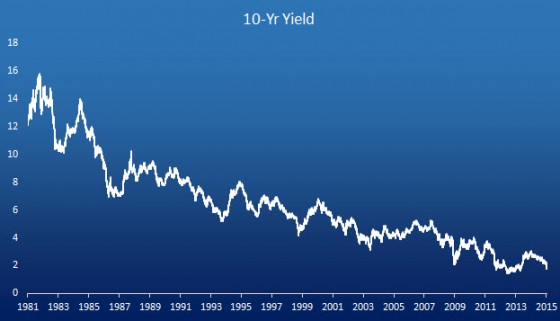 Others believe the central banks are in control of rates, but in reality, they are like the Wizard of Oz. While you are in front of the curtain, they seem omnipotent but once the curtain is pulled back, not so much. They had the power to set in motion forces bigger than themselves. Now those forces are in play, and the rate is still falling.

Any 8 year old boy knows about pushing a snowball downhill, in the spring when the snow is wet and sticky. At first, it is a lot of effort to push. It gets easier and easier for a while. Then there is a point, a moment of no return, when he is not pushing any more. The snowball, now quite heavy and moving faster, is beyond his limited strength and mass to stop. He can run with it for a while, keeping his hands hovering over it and pretending he has it under control. However, the fate of the snowball is governed by only two things at that point: gravity and whatever is at the bottom of the hill—window, car, or street.

The snowball is the interest rate, and the young boy is the central bank.

There was a brief correction in 2013, and since then the interest rate trend has accelerated with a vengeance. Last year at this time, the rate on the Swiss 10-year bond peaked at 1.25%. So far this year the avalanche has continued, and on close of business Friday it was 0.06%.

Every bond speculator understands something, and it’s time for debtors to understand it too. When the rate falls, the same stream of future payments has a higher net present value. The price of a bond goes up as the interest rate goes down. That’s because that set of payments that will occur in the future is worth more today. And that is because each payment is discounted to the present using the rate of interest.

The above assumes a 10-year payoff. However, a more accurate assumption is that all debt is perpetual. While one debtor may pay off his debt, in aggregate it is not possible to extinguish debt using irredeemable paper currency. The value of a perpetuity (bond of unlimited duration) doubles when the rate of interest is halved. Whether the rate is cut from 16% to 8% or whether it is cut from 0.1% to 0.05%, the net present value of the debt doubles.

Of course, cutting the rate from 16 to 8 is a significant reduction in the monthly payment. This fuels a huge boom. When it goes from 0.1 to 0.05 the change in the payment is negligible. In other words, the downside remains constant but the perceived benefit is diminishing.

And now the Swiss National Bank has fueled a ferocious rally in bond prices. It has issued mass quantities of francs to fund its mass purchases of euros. What it could not do is create productive ventures that needed to be financed with these additional francs. So the new holders of these new francs either deposit them in a bank—which buys government bonds—or buy government bonds directly.

These folks aren’t interested in financing a new venture anyway. Who are the new franc holders? Some may be citizens of peripheral countries, fleeing unsound local banking systems. They are unconcerned about a slight cost, which they are happy to pay to be safe from Greek banks stuffed to the gills with Greek government debt on the eve of what could be a historic default.

Others, hedge funds or individual traders, are speculating on the franc. They seek the sort of big-time capital gain that occurred when the SNB abandoned the peg. On their balance sheet, the franc went from €0.83 to €1.01, or a gain of 22%. A slight negative yield is just the cost of carry, nothing to worry about.

None of them are concerned about the challenges of the Swiss entrepreneur, the major Swiss corporations, or the Swiss economy. They are either looking for a safe haven in a storm, or trading a story to get rich.

The big news last Thursday was that the SNB cut the franc peg to the euro. This will slow or stop further issuance of francs, but a few hundred billion cats are already out of the bag. The SNB also lowered the sight deposit rate to -0.75%. The SNB may think that this eases monetary policy, in lieu of a euro peg.

In any case, it provides an incentive for people to choose the bond over a bank account balance. This may be what caused the 1-year bond to fall to -0.72% interest (representing a yield curve inversion).

What’s the bottom line? A rising franc means a rising liability for anyone who is short francs. Who would that be? The Swiss National bank, the Swiss commercial banks, Swiss pension funds, Swiss insurers, Swiss annuities, to name a few. Their liability just went up 22%, corresponding to the value of the asset that went up on franc holders.

In addition, the net present value of a debt is not simply the gross amount. It’s the discounted value of future payments. If the interest rate goes down, then the net present value goes up. This is a bigger impact than the change in the value of the franc itself. A rising burden of debt is a formula to crush debtors.

Even this early, a few have been crushed. Several currency brokers including FXCM have been wiped out by the move. The Everest Capital Global Fund took dreadful losses as well. Stories of collapsed businesses are coming.

It is important to realize that when a loss is realized on Jan 15, 2015, the damage did not occur on that day. It occurred in the long lead up prior to that. The losses were masked (or event encouraged) by the SNB when it temporarily manipulated the market price of the franc. Market prices are signals, and you distort a signal at grave peril of perversely discouraging prudence and encouraging destruction.

As with the Cyprus bank defaults, the actual losses occurred months or years prior, in an insidious process that went unnoticed. Until suddenly—catastrophically—a single event shines a spotlight on the loss. In other words, an entity’s liabilities may trade at par but that does not mean the entity is solvent. It could mean that governments are using their powers to conceal the truth from people.

The Swiss banks and many others have just taken dreadful losses. Perhaps the damage can be concealed for a while longer. Expect more defaults.

When the death of the franc occurs, it will be when creditors flee the currency as they now flee Greek banks. It is too soon to say if this is imminent, but it’s hard to believe that any currency can long survive the destructiveness of negative interest rates. A whole book could be written on the perverse incentives imposed by this unnatural condition. This is entirely separate from the losses already occurring and yet to come as the rate continues to move.

I can only conclude by offering my advice to the SNB. It is time to consider what would have been unthinkable. Issue gold bonds