The European Central Bank’s (ECB) decision to charge a negative interest on overnight deposits is not going to lead to a higher targeted inflation rate, despite ECB President Mario Draghi’s insistence that it will. Like all cases of central planning, this decision will have unintended and costly consequences – some of which are already starting to play out. In this particular case, instead of stimulating business lending or higher prices, the decision will only stimulate the increased buying of insolvent government debt – leading us all one step closer to the economy’s eventual unraveling.

The Sovereign Debt Bubble Is a Bigger Issue

Since the announcement earlier this month, banks have skirted around the negative interest rate imposed by the ECB via the purchasing of government bonds. These are the perfect vehicles for banks, as they are considered «virtually» risk free securities.

We can see this has already started occurring if we examine the yield on a couple of 10-year eurozone bonds. Keeping in mind that the yield on a bond is inverse to its price, take a look at the charts for the Spanish 10-year bond and the Italian 10-year bond. The yield on both bonds has dropped. 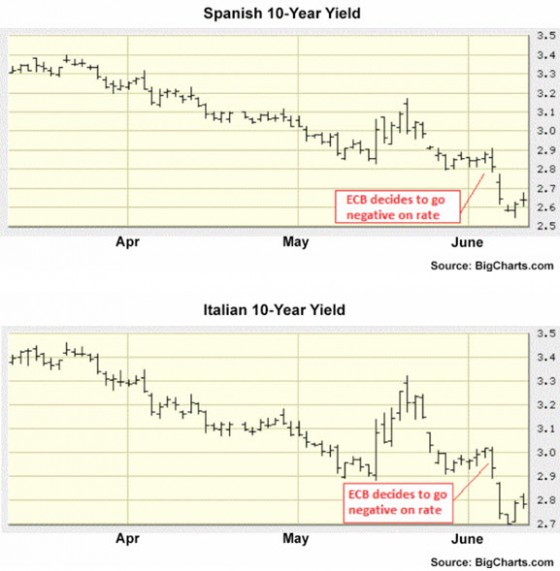 It should be obvious that this measure has and will continue to allow governments to borrow more money and more easily roll over their existing debt obligations. However, more importantly – and more dangerously – it increases the net exposure that banks (and their customers, who are you and me) have to the promises of insolvent governments. This could spell real trouble for anyone that hasn’t already removed their capital from the financial system with gold or silver.

The «Real Crash» Is Yet to Come

The last five years since the 2008 financial crisis have been marked by unprecedented intervention by central banks. Peter Schiff was one of the first to realize that the policies being passed to aid the economic recovery (TARP, bailouts, QE, etc.) were really creating the next boom and bust cycle.

But this new boom and bubble is different.

In his own words, Peter described 2008 as the «tremor» that would precede the «earthquake.»

The reason why Peter thinks the day of reckoning is still to come does not have as much to do with the size of the current bubble. Although size is important, it has everything to do with where the bubble is being blown.

The coming «Real Crash,» as Peter calls it, has its roots in the false promises of insolvent governments to pay their debt obligations when they literally can’t. That is why the ECB’s decision is so pernicious – because it fuels a sovereign debt bubble that will be all the more destructive when it pops.

What You Can Do

In his book, The Real Crash, Peter highlights several ways to keep your capital safe from what’s coming. Among other advice, he recommends you «own gold» and «stay liquid.»

Owning gold seems simple enough, but what does staying liquid actually entail? There is a little-known-gem-of-a-chart by the American economist John Exeter, who was considered an expert on the economics of the Great Depression. The chart is called Exeter’s Inverse Pyramid of Liquidity. Below is a modern adaptation. 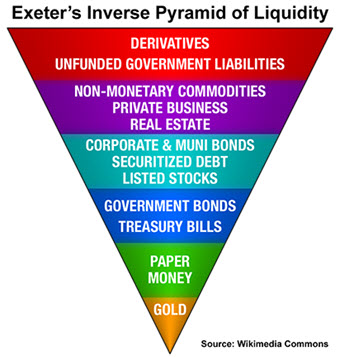 The pyramid organizes asset classes from top to bottom in order of increasing liquidity. Part of the theory behind the chart is that in times of crisis there is always a movement out of less-liquid assets into more-liquid assets. The reason for this is not hard to understand. When you are faced with the reality of losses or defaults, you want to minimize them as best you can. The way to do this is to sell out of the losing investment into something more stable and resilient – something more universally demanded.

We are now in the middle of another cycle created once again by our institutions of volatility – central banks. But this cycle is different.

This is the earthquake cycle that the tremor of 2008 preceded. It’s not another housing bubble (top of the pyramid) we have to worry about; it’s a government debt bubble (right in the middle). The ECB’s decision to go negative on the overnight deposit rate has only served to increase the total amount of debt in the system. You will notice on the chart that government debt lies right above the pieces of paper we call money.

It’s not a fiscal cliff we are going over, it’s a money cliff.

Once people realize that this boom in government debt is not worth the paper it’s printed on, then there will be a similar flight to more-liquid assets at the bottom of the pyramid.

This is where gold and silver come into the picture. By now, you should realize that when Peter recommends buying gold and staying liquid, he is really saying the same thing. Gold stands at the bottom of the pyramid.

The best way to insulate yourself from the costly folly of central bankers and insolvent governments is to own the most liquid asset.

Gold is the most liquid asset.