Government Debt and Deficits Are Not the Problem. Private Debt Is.

Last week, on July 30, the Republic of Argentina was declared to be in default for the third time in 30 years.

Let’s put that into perspective. If you were a bank officer who offered a 30-year mortgage to the Government of Argentina in the early ’90s you would have spent nearly the entire life of the loan in a perpetual nightmare of refinancing. You would likely be not only fired from your job, but a pariah in the entire industry. This is what Argentina’s international creditors and domestic citizens have faced in real life. At the time of writing this article S&P has downgraded Argentina to CCC-, one of the lowest ratings available for sovereign governments.

The tragic history of sovereign defaults in Argentina expounds a vitally important lesson to all overly indebted countries, including the US, which do not want to face a similar fate.

The inability for governments to pay back debt spells economic disaster.

The Road to Default

After previous monetization of debt lead to hyperinflation in the 1980s (which nearly evaporated the nation’s savings and capital), Argentina was looking for something different. Sadly, they knocked on the wrong economic door. Rather than seeking a free market in money and credit, they opted for centralized economic planning via a Central Bank Currency Board that pegged and regulated the ratio of dollars to pesos. The idea being that this imposed ratio would limit the risk of inflation. This was folly. Politicians are experts at working around their own supposed limitations if it proves expedient.

Rather than paying off the debt and restoring creditworthiness amongst their lenders, the government skirted the limitation by borrowing dollars offshore. This financed increased government spending while freeing the central bank to issue more pesos due to the increased dollars on hand. However, given Argentina’s reputation, this new debt came at a much higher risk premium – meaning higher monthly interest payments. With the government showing no concern with ever paying, it was only a matter of time before that marginal payment became too much. In 2001, default arrived and a new economic crisis ensued.

The results of this journey left Argentina right back where it started – growing debt obligations and dwindling means to repay them.

Interestingly, Argentina’s post-2001 monetary policies have been applauded by many in the mainstream monetary community, most notably Paul Krugman. Current president Christina Kirchner even referenced Krugman’s praise in a speech she made as early as 2012. Krugman is a staunch advocate of the Keynesian School, which supports direct economic intervention via central banks or central economic planners to stimulate economic growth. By stimulation, he means borrowing more money to spend more money. The hoped result is an increase in aggregate demand, the lack of which he cites as the cause to economic woes.

Unfortunately, it’s not just Argentina who has been following the Keynesian model of borrowing more in order to spur economic recovery. That is precisely what the government of the United States has been doing as well, albeit in a more privileged position given the dollar’s world reserve status. Yet the essence is the same. As Argentina did pre- and post-2001, so the US has done pre- and post-2008 – increased its debt in the name of recovery with no regard given to how it will be repaid. Argentina should serve as a prime example to the US and other indebted sovereign states of where such policies end up – default.

The Consequences of Default

It might be tempting to think that since defaults happen so frequently, they must not be a big deal. This could not be further from the truth. Defaults carry devastating economic consequences and not just to creditors who are left holding the bag. Due to the interdependent nature of the financial system, the failure to pay always comes with collateral damage. In sovereign debt defaults, it is the citizenry that bears the brunt of the pain. It is the Argentine people who are suffering most.

Default means devaluation. Devaluation first occurs in government debt, which is discounted to account for the government’s inability to pay. Next, it moves into the national currency. After all, if the bonds, which are redeemable in pesos, prove to be worthless because Argentina can’t pay, then what are the pesos worth? In official reports – in which the numbers are openly cooked – the Argentine peso has already seen triple-digit inflation in 2012-2013. In the more reliable unofficial reports, the numbers are nearly three times higher! 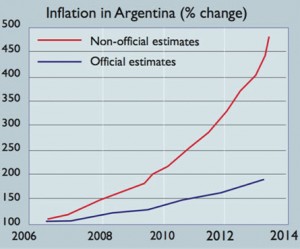 Another deadly consequence of sovereign debt default is the erosion of trust. Because of the government’s irresponsibility, potential foreign capital and investment is deterred from entering the country. Without capital investment, economic growth is impossible. An inflationary environment combined with systemic uncertainty makes entrepreneurial activity and economic calculation impossible. Therefore all productive enterprises will flee the country and take their capital with them. In effect, Argentinians have been robbed not only of their purchasing power, but of incalculable economic growth and prosperity that half a century of free-markets and capital investment could have created.

The Definition of Insanity

Argentina’s central planners have pursued a slew of defunct monetary policies of the Keynesian, Monetarist and Mercantilist variety. Repeated default is the fruit of that labor.

Today, spendthrift governments who betray the trust of their creditors are the new normal. Over-indebtedness followed by default is becoming commonplace. It has been creeping up in the US, from Detroit to Jefferson County, and soon perhaps the entire Commonwealth of Puerto Rico (a US territory).

In a free world, no one in their right mind would give their hard-earned capital to Western governments. Sadly, we do not live in a free world. There is not a free market for money or credit in Argentina or the US. Guided by unfair laws and insidious regulations, people continue to entrust their wealth to institutions that are actively betraying them – promising to pay out in worthless, devalued paper.

A refuge still remains for investors. There is still largely free exchange between government paper and gold and silver.  By making this trade, we can opt-out of the spiral of default.

In 2001, if your average Argentinian had kept his books in gold instead of pesos, he would have been insulated from the financial circus that has since ensued. He would not have experienced the haircuts, the devaluations, or the “surprise” of finding out that the government wasn’t good for its money.

What is true for Argentina is true for the rest of the world. As the number of outstanding promises of defunct governments continues to rise and the means to honor those promises fall short, then there is no clearer lesson for our future than looking at Argentina’s recent past.