This article originally appeared in ZeroHedge.

At a time when Spain is back in the limelight on account of its ever-sprouting corruption scandals, the government is trying to switch public attention to the prospect of impending economic recovery.

Last Thursday, when the National Statistics Institute (INE) reported a 0.90 percent drop in the active population unemployment rate (down to 26.26 percent from the previous quarter’s 27.16 percent), Economy Minister Luis de Guindos assured: “Despite all the difficulties, today I am convinced that the worst is over and that the Spanish economy will leave behind the negative growth rates.”

Although some may find the minister’s statement a rather cynic proposition considering the reality on the streets, there seems to be a growing readiness to embrace the government’s optimistic message.

Before uncorking the cava, however, let’s take a look at the arguments put forth by the Spanish government to announce that the country is finally leaving the crisis behind. 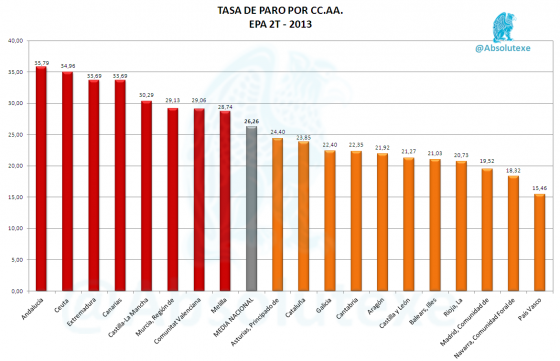 The following chart (courtesy of estadolimitado.com) illustrates Spain’s dramatic demographic structure. The bottom line is that 29.62 percent of the Spanish population (public workers not included) keeps the entire country afloat. 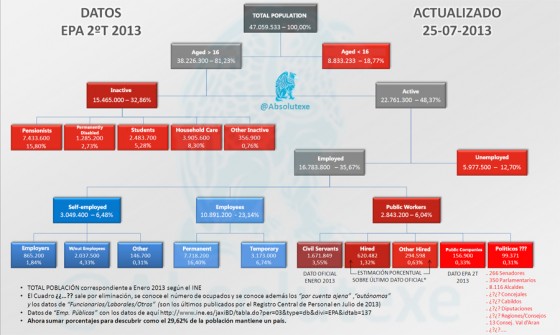 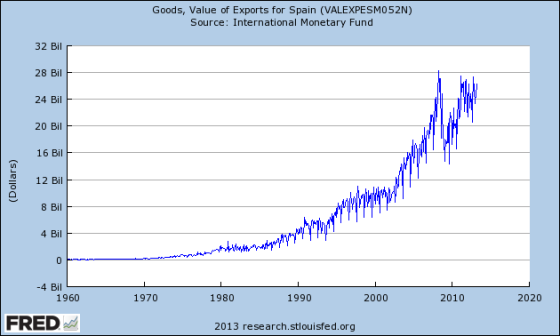 While loaded Spanish trucks carrying industrial goods and subsidized agricultural products are yet to create a traffic problem in northern European highways, there is more to the story of Spain’s relative rise in exports, which ultimately are merely getting back to their pre-crisis trend.

Given the continuing deteriorating domestic demand and high unemployment rate, the country’s trade balance would most certainly tell a different story under “normal” circumstances. Thus, the governments’ idea of raising productivity and incentivizing exports solely via fiscal devaluation will soon encounter its limitations.

Perhaps the most positive development in the Spanish export sector is its penetration of new markets in Asia and Africa (while exports to the EU fall).

In addition, the country must thank its Nordic visitors, (as well as British and Russians) for the country’s rising export figures.

While certainly positive, it would be disingenuous to claim that an interim spike of visitors to a tourist destination deeply in need of renewal and investment will fix the economy. Not to mention that competing destinations such as Portugal, Greece, and even new euro-member Croatia, will also focus on tourism as key to economic prosperity.

As for imports, the decline is sadly positive for a simple reason: Spaniards are broke.

The public sector is shrinking; reforms are underway

Here is where the sales pitch begins to turn embarrassing.

Spain has shed nearly 10% of its public labor force (over 370,000 jobs) in a little over two years, and yet it still fails to control its government spending. Moreover, the government claims that the hardest part of the adjustment is over, and yet the country’s debt-to-GDP ratio has reached 90 percent and continues to climb.

Then there are the ongoing structural reforms, which range from naïve to insulting.

As confirmed by a study conducted by HR consulting company Adecco released today, Spain is the European country with the most independent workers in the services sector (56.7 percent). Such independent workers, however, are not necessarily entrepreneurs or their “own bosses,” as self-employment is commonly viewed. Increasingly, Spanish job seekers are required to register as self-employed in order to find work at shops, hotels, hair salons, etc., hence, allow business owners to save in Social Security fees and terminate contracts more easily as opposed to direct hiring.

As per Adecco’s study, Spain emerges as the European country with the highest proportion of unskilled workers in its labor force (32.5 percent).

This brings us to the Spanish government’s plan to boost self-employment and entrepreneurship. The plan centers on lowering the monthly Social Security Tax to €50 per month, for six months. Originally, this plan was aimed at the young, but the government has now decided to make it extensive to all unemployed. Some say Spain boasts the most-educated youth in its history. Perhaps the government believes such a highly educated youth also knows how to setup a profitable business in less than six months; without financing, that is, as the banking sector’s bad loans rate (11.3 percent) continues to rise.

“Evil deeds in the name of patriotism” comes to mind when it comes to the Spanish government’s energy sector reform (the second this year). While Spanish households have suffered a 56% hike in their electricity bill over the past six years, to this date the government continues to defend a quasi-monopolistic model, from power generation to distribution. Instead of reforming and, while at the same time putting an end to the absurd nuclear moratorium (because the notion that the consequences of a nuclear disaster in France would never cross the Pyrenees remains childish), the government is continuing to raise the model’s unsustainable bill (i.e. the €26bn tariff deficit) on consumers and taxpayers.

Indeed, the latest move to impose a tax on renewable energy self-generation –effectively a levy on sun rays—speaks volumes of the Spanish government real agenda when it comes to one of the biggest lobbies in the economy. Or, as Reason so eloquently sums up , “the tax is just enough to make sure that homeowners cannot gather and store solar energy cheaper than state-sponsored providers.”

As for the financial sector reform,  Wolfgang Münchau’s assessment from last March remains applicable: minus its two largest banks, Spain’s banking system is broke. As it is now official that Spain’s bank restructuring fund (FROB) recorded a €26bn last year and that it has to deal with a €21bn hole, perhaps it is time to remember Minister De Guindos’ words only 14 months ago, when he also painted a shinier future: “[The financial sector bailout] will not cost anything to the taxpayers.”

Time for a fiesta?

As opposition parties’ threat earlier this month to call a vote of no confidence for Prime Minister Mariano Rajoy forced the Spanish premier to schedule an appearance before parliament next Thursday to explain his party’s alleged illegal funding, there’s an evident effort to sell the story of a brighter future waiting just around the corner.

In fact, Rajoy has already made it clear that he will focus his presentation on matters of the national economy, so we should expect more of these circular arguments, as well as a repeat of Vice president Soraya Sáenz de Santamaría’s ludicrous affirmation that proof of the country’s political stability is the fact that the Treasury is carrying bond sales successfully.

While the economy bottoms out and most jobs options continue to be cheap, low-qualified labor, the underlying story, and real tragedy, is that the country’s economic model remains unchanged and that high unemployment in Spain is to stay for years to come.

Mariano Rajoy’s government may, as its predecessor did, announce “around the corner” recovery to keep the population’s hope alive and dodge uncomfortable matters such as corruption scandals, but in reality the country’s trend is quite worrying. Some point to Japan as the future that awaits southern European countries such as Spain, in that it is doomed to endure decades of stagnation. However, it may be worse. As Spanish economist Santiago Niño-Becerra told me last year:

I rather think of underemployment: people working ‘bits’ of their lives, a few months, sometimes a few weeks, sometimes in jobs below their qualifications, and most with partial contracts. And many, many moonlighters. Those who are highly competent will be seamlessly moving from project to project. Continuing advances in communications and crowd sourcing will favor these processes. But I think that structural unemployment will be very high and, if employment is continued to be measured in terms of ‘full-time employment”, the number of unemployed people will be permanently high. Yes, I think the implementation of a living allowance to cover the absolute minimum will be necessary, and that can take the form of food stamps….

Forget the celebrations. Call it a siesta. 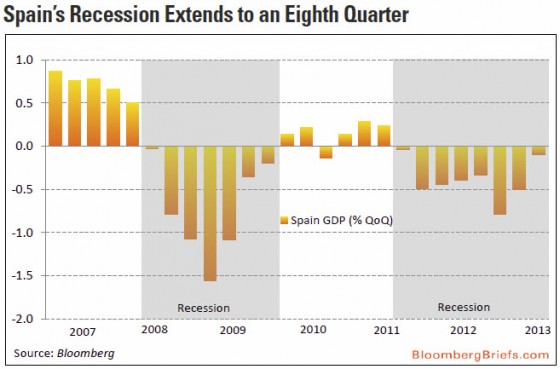