[VIDEO] The Future of Europe

Lest we forget: The neglected roots of Europe’s slide to authoritarianism

A multitude of evils can hide behind the ideological veil of top-down European integration. 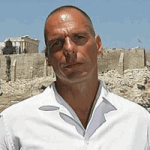 Europe is being torn apart by a titanic clash between (a) the unstoppable popular rage against misanthropic austerity policies and (b) our elites’ immovable commitment to more austerity. Precisely how this clash will play out no one knows, except of course that the odds do not seem to be on the side of the good. While at the mercies of this crushing uncertainty, it is perhaps useful to take a… short quiz. So, dear reader, will you please read the following ten quotations and, while so doing, try to imagine who uttered or wrote these words?

[1] “Above and beyond the concept of the nation-state, the idea of a new community will transform the living space given us all by history into a new spiritual realm… The new Europe of solidarity and cooperation among all its peoples, a Europe without unemployment, without monetary crises, … will find an assured foundation and rapidly increasing prosperity once national economic barriers are removed.”

[2] “There must be a readiness to subordinate one’s own interests in certain cases to that of the European Community.”

[3] “The solution to economic problems… with the eventual object of a European customs union and a free European market, a European clearing system and stable exchange rates in Europe, looking towards a European currency union.”

[4] “The results of excessive nationalism and territorial dismemberment are within the experience of all. There is only hope for peace by means of a process which on the one hand respects the inalienable fundamental patrimony of every nation but, on the other, moderates these and subordinates them to a continental policy… A European Union could not be subject to the variations of internal policy that are characteristic of liberal regimes.”

[5] “A new Europe: that is the point, and that is the task before us. It does not mean that Italians and Germans and all other nations of the European family are to change their spots and become unrecognizable to themselves or to one another, from one day or one year to the next. It will be a new Europe because of the new inspiration and determining principle that will spring up among all these peoples.” … “The problem of the hierarchy of states will no longer arise. At least in its usual form, once we have cut off the dragon’s head; that is, the notion of state sovereignty. Moreover, this does not have to be dne outright, but can be achieved indirectly, e.g. by creating interstate European bodies to look after certain common interests (exchange rates, communications, foreign trade etc….)”

[6] [Here I shall quote from a well received, at the time, policy document which recommended the need to] “…put forward a European con-federal solution based on free cooperation among independent nations” [culminating into uniting Europe] “on a federal basis” [and adding that, to see this federation process through], “all that is required of European states is that they be loyal, pro-European members of the community and cooperate willingly in its tasks… The object of European cooperation being to promote peace, security and welfare for all its peoples.”

[7] “We must create a Europe that does not squander its blood and strength on internecine conflict, but forms a compact unity. In this way it will become richer, stronger and more civilized, and will recover its old place in the world.” “National tensions and petty jealousies will lose their meaning in a Europe freely organised on a federal basis. World political development consists inevitably in the formation of larger political and economic spheres.”

[8] “It is not very intelligent to imagine that in such a crowded house like that of Europe, a community of peoples can maintain different legal systems and different concepts of law for long.”

[9] “In my view a nation’s conception of its own freedom must be harmonised with present-day facts and simple questions of efficiency and purpose… Our only requirement of European states is that they be sincere and enthusiastic members of Europe.”

[10] “The people of Europe understand increasingly that the great issues dividing us, when compared with those which will emerge and will be resolved between continents, are nothing but trivial family feuds.” … “In fifty years Europeans will not be thinking in terms of separate countries.

OK, now that you have read the quotations, you may take a look at the list of their authors below.

Lest I be misunderstood, allow me categorically to state what the purpose of listing these quotations is not: It is not to imply that the European Union we have created since WW2 was founded on nazi-fascist principles. And it is not to insinuate that today’s Germany bears similarities with Hitler’s Germany (for why else would I be calling for an hegemonic Germany?).

No, the reason for relating these quotations here is that we Europeans have a moral obligation to dispel the dangerous illusion that the notion of a European Union, within which nationalisms and the nation-state might gradually dissolve, was an enterprise to be understood as the polar opposite of plans drawn up by the autocratic, misanthropic, racist, inhuman war-mongers that rose to prominence as a result of the mid-war European Crisis.

As the quotations above demonstrate (and however insincere their authors might have been), the notion of a European Confederation or even Federation is, in itself, not incompatible with what the Nazis had in mind. The lesson to be drawn from this is not that the European Union is totalitarian by nature but, instead, that it is not incompatible with totalitarianism and, thus, that the current democratic deficit that grows with every twist of the austerity screw bodes ill for Europe’s democrats.

In brief, a multitude of evils can hide behind the ideological veil of top-down European integration, especially when it is accomplished in the midst of (even by means of) a vicious, asymmetrical recession. So, I am writing today’s post as a Europeanist who wants to imagine Europe as our common home but who also fears that Europe is sliding into an unbearable authoritarianism threatening to turn our common home into a shared concentration camp.

[1] Arthus Seyss-Inquart, Minister of Security and the Interior in the post-Anschluss Nazi government, 1938, and later Prefect of Occuppied Holland – here he is addressing his Dutch subjects

[3] Memorandum of the Reich Chancellery), 9 July 1940, signed by Hermann Göring

[5] Camillo Pellizi, editor of Civilita Fascista, in an article entiled ‘The Idea of Europe’