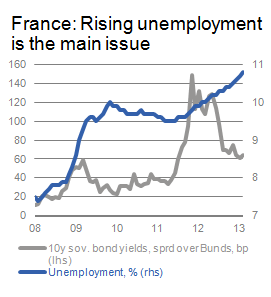 The last few weeks have not been kind to France. The government is mired in controversy and losing popularity fast. The economy is suffering from fiscal drag, low corporate profits and weak competitiveness. GDP will likely contract 0.6% whereas German GDP should grow 0.3% this year. Even the latest “In-depth-review” by the European Commission bemoans insufficient reforms. Despite all that, investors remain unfazed and continue to lend France money at record-low interest rates (sov. yields are only 50-60 bp above Bunds).

Investors are clearly banking on France being “too important to fail”, meaning they expect the ECB, with tacit German approval, to step in if necessary. This is a big opportunity but also a big risk. The opportunity is that France can afford a more gradual adjustment path and avoid the economic downward spiral some countries at the periphery have experienced. The risk is, of course, that without market pressure reform efforts might stall. But even with low yields, soaring unemployment will be the defining force. Bear in mind that Germany’s Agenda 2010 was triggered by unemployment, not rising yields. France’s national assembly passed a labour-market reform bill last week, which is a first step in the right direction. France must balance long-term reform with short-term stabilisation; otherwise there is a risk of France relapsing into reform-refusal mode. The currently benign investor sentiment provides a helping hand.