Do you think that depositors in Cyprus are being taxed? That their money is being taken from them to go to the government in Cyprus or to Europe? Most analysis of the Cyprus bailout is wrong on this point.

Cypriot banks are like all banks in one respect. They raise capital to buy assets that earn a yield, keeping the difference between what they must pay for the money and what they earn on it. Like all banks, they raise money first from equity investors. Equity investors get to keep all of the gains on the upside and therefore are first exposed to losses on the downside.

Finally, banks raise money from depositors. Depositors get the lowest rate of interest, which is the tradeoff for having the strongest position in case of bankruptcy. In addition to not suffering any losses until all other classes of capital are zeroed out, depositors also enjoy a government guarantee today, at least up to a certain amount (€100,000 in the case of Cyprus)—so long as the government can pay. It is important to note that while the government maintains the fiction of a “fund” to cover such losses, in a bank crisis the losses are imposed on the taxpayers. Today in the US, for example, the FDIC has a tiny reserve to cover an enormous deposit base. 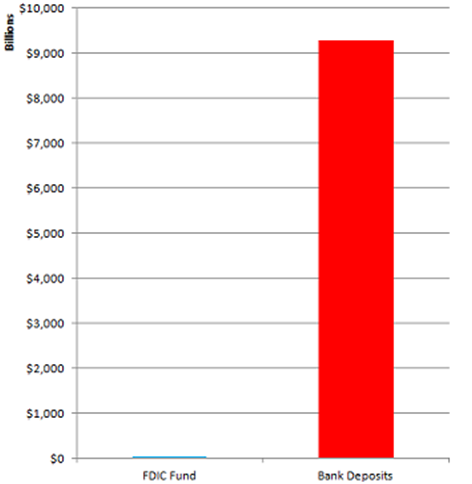 In the modern world, government bonds are the key security in the financial system. They are defined as the “risk free asset” by theory and regulatory practice. They are used as collateral for numerous other credit transactions. And banks hold them as core assets. Let’s focus on that. A bank borrows from depositors and buys a government bond (and not entirely by choice). There are two problems with this.

First is duration mismatch. The bank is borrowing from depositors, perhaps via demand deposits, and then buying multiyear bonds. Read the link to see why this will sooner or later blow up.

Second, the government bond is counterfeit credit. Governments are borrowing to pay the ever-expanding costs of their welfare programs and the interest on their ever-expanding debt (it is no help that they lower the rate of interest to keep down the interest expense—this increases their burden of debt and destroys capital). Governments have neither the means nor intent to ever repay the debt. They just endlessly “roll” the liability, selling new bonds to pay the principle and interest on old bonds at maturity. This would be like taking out a new credit card to pay off the old one. It “works” for a while, until it abruptly stops working. It has stopped working in Greece; it will stop working everywhere else at some point.

The Cypriot banks bought lots of government bonds, including the defaulted bonds of bankrupt Greece. They lost the euros that were invested by their shareholders, bondholders, and a majority of what was lent to them by depositors. In a way it is accurate to say that the government took it. However, his taking did not occur this week. It occurred when governments sold them fraudulent bonds over many years.

The money is now long gone.

Call it what you will, the government, central bank, and commercial banks of Cyprus are bankrupt; they needed a bailout—new credit from outside the country to postpone collapse. In a week of drama, posturing, demands, reversals, and a vote in parliament, a deal was struck. No one is likely to be happy. Here are the key points so far as we can glean them:

The Europowers have a big dilemma. If they allow euro backwardation to persist much longer, or they open a schism in the euro where Cyprus euros are not fungible, they risk the collapse of the euro. On the other hand, if they do not impose capital controls then depositors would run on the Bank of Cyprus and it will collapse (ZeroHedge has been covering the story that large Russian depositors have found ways to make withdrawals even though the banks have been closed, using branches located outside the country).

We hope that if the reader gets nothing else from this article, at least he now understands that the Cyprus banks lost their depositors’ money over a long period of time. They used leverage to buy assets that collapsed and now they are insolvent. External parties are providing a bailout (which Cyprus will never be able to repay). For the first time in this crisis, the bailout does not cover depositors in full. Losses are to be suffered by not only shareholders and bondholders, but even by depositors. We expect future bailouts to incorporate this feature.

It is good that Eurozone leaders are beginning to assert that banks should fix themselves. In a free market, there is no such thing as a bailout that takes money from taxpayers to give to those who made a mistake. Hopefully they will take this to the next logical step and realize that bank solvency is impossible under the regime of irredeemable paper currency wherein the government bond is defined as the “risk free asset”. Gold is the risk free asset. Everything else has a non-zero risk of default.

We will continue to monitor and publish the gold basis to see when world markets begin to shift away from trusting the banking system, when people are willing to forego a yield to avoid having to trust a counterparty. When this happens, we expect gold to move more significantly towards gold backwardation.

Compared to the first proposal last week, this bailout is less unfair (we can hardly call any bailout fair)—at least shareholders go first, then bondholders then depositors.