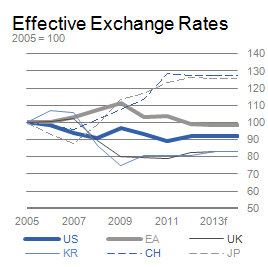 Recently, talk about “currency wars” has made a comeback (after appearing back in 2010 with the Brazilians taking the lead role), prompting G7 and G20 finance ministers to issue a statement on the matter. While many have criticised the G20 statement as being soft on the issue, at its core the G20 position makes a valid point:

Talk about “currency wars” is not helpful, as it distracts from the origin of the problem: this is not a period of competitive devaluations akin to the 1930s aimed at current account surpluses; instead, FX movements are a side-effect of monetary policies aimed at stimulating growth, or, as in the case of Switzerland, aimed at countering the effect of overwhelming capital inflows due to the flight to quality. In fact, effective exchange rates have been quite stable for the USD and the EUR; and the JPY has only depreciated following a prolonged period of appreciation starting in 2009, which has not been reversed. Similarly, the CHF, which is subject to official intervention, had appreciated strongly before. If at all, focus should be on the GBP and the KRW, which are both down some 20% in trade-weighted terms from 2005 levels. This is not to say that loose monetary policies are not risky, and clearly such policies have repercussions on exchange rates and, in the case of emerging markets, potentially on macroeconomic stability. But it is the appropriateness of monetary policies that should be debated – while keeping in mind that exchange rates are impacted by many other factors, too. Don’t get distracted by catchy phrases.