Why social tension in Spain does not boil over
Publicado el 14/08/2013  WEAYL: Godot Economics  eurozone , Spain

Beware of Olli Rehn and his siren call for flexibility 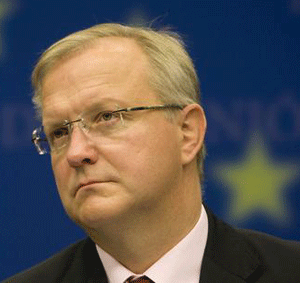 Olli Rehn, Eurotubby extraordinaire, managed to stir up yet more indignation earlier this month with the latest instalment of his rather weird blog Spanish Sketches A.D. 2013: Can Spain achieve what Ireland and Latvia did?, in which he writes about Spain and Bob Dylan.

In the post, Olli Rehn calls for a «broad political and social consensus on an economically optimal path of adjustment» based on some sort of grand «social agreement».

As European kings and emperors once drew lines across the world, dividing up continents between themselves, so it seems that the Olli Rehn & co. aspire to divide up the economies of «Member» States – a grand pact between different «social partners»; a consensus between «employers and trade unions» … cheaper wages in return for more members?

In one breath Olli Rehn laments the «lack of flexibility» in the Spanish labour market; in the next breath he is calling for global agreement between Government, big business and unions to structure a grand plan to manage the economy. While he dresses up his proposals as flexibility, what he is proposing is an imposition based on a negotiation between unaccountable groups who have been self-appointed to safeguard the interests of everyone else (call them «social partners» but do not confuse them with anything that represents wider society).

Olli Rehn’s call for flexibility is a siren call: This is not flexibility; flexibility is freedom – giving individual employers and employees maximum scope to come to their own mutually suitable arrangements, free from external imposition and constraint. What Olli Rehn calls flexibility, is not the empowerment of on-the-ground decision-making and scope for spontaneous action, but rather increased susceptibility to direction from above – more malleability than flexibility.

What he is implying through his analysis has much that is right, but what he is proposing has it all wrong. He is perverting an agenda (of flexibility, economic freedom, opportunity and enterprise) that could shine a light out of Europe’s malaise, to push another far more divisive and unseemly agenda – union and big-business power, top-down economic control and dependency on the centre. As a result of this persistent perversion by the Troika and their Southern European minions, the pro-enterprise agenda, as distinct from the pro-business agenda of big government and big finance, is being discredited; and the population is being polarised against it.

Using the same tactics, they sold austerity as reform, when in fact austerity is nothing of the sort and, to the contrary, exists in Southern Europe especially as an alternative to reform; and as a result, we are now left in a situation where any goodwill that may have existed to support essential reform has been squandered, consumed in opposing the vindictiveness and aimlessness of austerity.

And just as austerity is not reform, imposed wage reduction is not labour flexibility; we should not allow Brussels to hijack the debate for the purposes of its own agenda, as it did with austerity, and turn it into a pro vs. anti labour «reform»: a false debate, where the interests of many employers and employees are left unserved by either side.

We need to reclaim the debate from Brussels and its advisors – we do not need an internal debate about who gets what in the distribution of top-down control; we need to debate the merits of bottom-up empowerment of the individual vs. top-down economic planning and management by an elite of «European policy-makers, as well as social partners and business leaders, academics and commentators»; widespread individual opportunity vs. arbitrary guarantees and centralised stimulus schemes; individual responsibility vs. regulation and protection;. We either accept direction from above (from big business/finance, big government and organised special interest), or we reject it and revive individual power and responsibility.

Since Europe’s economic crisis began, learned opinion has pandered to our desire for a painless fix, and it has proposed a series of top-down fixes, most of which have served specific political agendas: the pursuit of a unified Europe and the preservation of the incumbent system and its embedded powers. Europe’s solution we are led to believe will come from Eurobonds, the ECB, from the EIB, from xyz union, a concentration of policy-making and regulation. All solutions emanate from the centre, the nation state reduced to passive recipients of policy-making, to vassals. Small business and individual enterprise is seen, not as a driver or instigator of economic vigour, but as a product of the economy, such as the unemployed or pensioners. Growth, it is said, must come from exports, from leveraging big-business know-how and economies of scale competing in China and Brazil, supported by big money and Government «investment» – the rest of us exist passively, to support big business as it struggles benevolently on our behalf around the world and to rubber stamp the policies devised for us.

It’s ironic that those who most vehemently profess to safeguard the welfare of the masses have the least confidence in the individuals that make up the masses. They circulate economic and financial solutions which hold the individual as passive and helpless. And ultimately, economic growth can only be engineered from above if the human component is passive and compliant (call it «behave responsibly» if you like). And while compliance can be contrived for a period, it is a model that is ultimately unsustainable – compliance kills creativity, risk, initiative and ambition, it averages out individuality; it nurtures inferiority. A compliant population requires an elite who, despite their expertise and renown or even democratic legitimacy, are disconnected from the circumstance and emotion of the situations they are deciding upon; for an elite cannot, by definition, understand the full range of motivations that drives a population; it cannot foresee or even conceive of all outcomes, and these removed individuals are likewise susceptible, also by definition, to the influence of incumbent power, and so are at risk of representing incumbent power and incumbent ideas and interests to the detriment of the upstart, the challengers, movers and shakers – they are susceptible to stagnation and decline.

The main drivers of economic growth and innovation are basic, human and emotional – ambition, aspiration, a desire to be independent and self-reliant, a desire to improve and achieve – so that any policy or measure that sidelines or depersonalises (i.e. institutionalises, collectivises or tries to direct) these human drivers of economic improvement and performance, is likely to be detrimental to the overall outcome.

Humans, and therefore human organisations, perform best when individual reward and satisfaction is aligned with individual merit, performance and motivation, so that anything that Government does, in furtherance of its own vision, to protect from failure or to mitigate the effects of poor performance or misjudgement, or likewise to make success dependant on external factors, inhibits performance, dulls initiative and saps motivation.

This is what the market really is – the combined disparate, conflictuous and inexpert decision-making of the general population of individuals in the face of their own circumstances, fears, needs, ambitions and aspirations; the collective economic energy, emotion and humanity of a mass of individual behaviours and inputs (essentially positive and negative), interacting, clashing and swarming, in a free, competitive and unfettered environment, not a small group of hedge funds, economists and sovereign wealth funds. Financial power is no more legitimate than political power; big business is inherently no more competent than big Government.

Yet just as big Government in Brussels has occupied the reform agenda with austerity to protect itself and its wards from an agenda of reform, so has Big Business and Big finance hijacked the link between individual reward and individual performance, using it to justify obscene salaries – to rationalise greed and the obsessive hoarding of wealth.

It should be the primary role of Government to enable, not to direct; no longer to lead the people, but to support the people, in their own fulfilment of their own aspirations. The job of government is not to put up obstacles to creativity, enterprise and individual ambition, but to harness it and maximise it, to create conducive conditions that enable individuals and organisations to flourish. Likewise it is the job of government to ensure that people are not arbitrarily excluded from economic participation, whether through destitution, unwholesome environment, lack of access to healthcare and/or education; exclusion detracts from the power of combined human resource (a successful organisation makes use of all the people, skills and ideas available to it, and likewise an economy). A belief that the economy should be driven from the bottom-up rather than led from the top, by definition, demands maximum participation – whereas allowing people who fail to fall by the wayside without further opportunity, while often dressed up as a mantra of market-driven economics, in fact limits and burdens the market. Government must always ensure that the successful do not over-leverage their success to dominate and stifle the market – the market must, by definition, be kept inclusive and universal.

And so when Brussels (or anyone else) calls for grand pacts and agreement to direct the economy we should be instinctively mistrustful; that natural mistrust should supersede any consideration of whatever is being proposed, since it will always be inferior to the optimal outcome that will spontaneously emerge from an uninhibited economy. When Olli Rehn calls for lower wages and lower prices, does he know better than the millions of individuals who pay and receive wages and who set and support prices (the collective wisdom)? The Troika’s track record on getting things right would suggest otherwsie. The optimal remedy (or «economically optimal path of adjustment» as Olli Rehn calls it) will always be far more complex than all the combined intelligence of Brussels, Frankfurt and the IMF could ever devise or engineer.