ECB – on the slippery slope 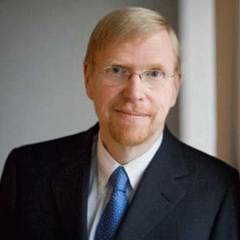 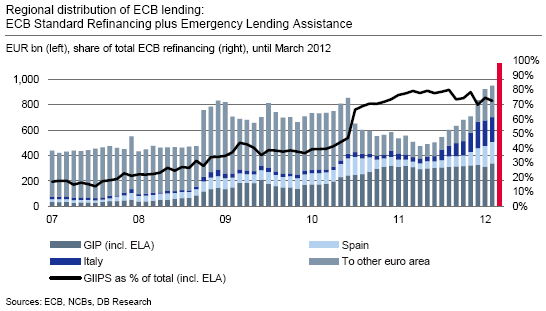 Bundesbank President, Weidmann recently suggested that the ECB prepare the exit from its non-standard monetary policy by gradually tightening again the requirements for collateral used by banks to obtain central bank credit. Against this, ECB President, Draghi at this April press conference called any talk of exiting from the present monetary policy premature. Who is right? Most market participants and commentators would probably agree with Draghi. However, the ECB’s non-standard policy measures have been taken in order to deal with tensions in the financial sector and not to engineer a monetary easing beyond interest rate reductions, as has been the case in the US and UK. Hence, the call of the Bundesbank President should not be assessed primarily from a monetary policy point of view but be seen against the background of financial adjustment, especially balance-of-payments adjustment within the euro area.

According to conventional wisdom, adjustment to external imbalances among EMU member countries tends to be asymmetric and deflationary. Countries with unsustainable current account deficits are forced to reduce domestic demand while countries with current account surpluses are under no pressure to raise domestic demand. This is certainly correct as far as adjustment policies under IMF guidance is concerned. However, conventional wisdom ignores the Eurosystem’s provision of unlimited and low cost funding of balance-of-payments deficits, which supports domestic demand in deficit countries and may stoke inflationary pressures in surplus countries. Thus, the Eurosystem risks undermining the pressure for balance of payments adjustment on deficit countries exerted by EU authorities and the IMF. Clearly, the two channels of support to euro area countries with balance of payments deficits ought to be reconciled. From the Bundesbank’s point of view, the ECB ought to start phasing out its non-standard monetary policy measures sooner rather than later to avoid that inevitable external adjustment is achieved primarily through inflation in the balance-of¬payment surplus countries and to keep adjustment pressure on governments and banks in the deficit countries.

Why the Buba wants to exit – charts

Compare this simple textbook example now to the presently existing monetary adjustment mechanism provided by the Eurosystem. Countries with over-valued real exchange rates use funds provided by the ECB instead of foreign exchange reserves to fund balance of payments deficits. Banks in these countries fund their net payments abroad by borrowing from their national central banks virtually as much as they want against a very wide range of collateral (including IOUs under Emergency Lending Assistance) and at very low interest rates. As a result, they are under no pressure to reduce their balance sheet and may even expand it as it appears attractive to borrow from the ECB additional funds with a view to lending them to their national governments at a profit.

Compared to the textbook example, there is no downward pressure on domestic demand and the domestic price level in the balance of payments deficit countries emanating from the monetary adjustment mechanism. The relative price change is engineered through upward pressure on prices in the surplus countries. Funds borrowed from the Eurosystem in the deficit countries flow through the interbank payment system to these countries, expand bank balance sheets there, and eventually induce a liquidity driven expansion of domestic demand and an increase in the price level, which then corrects the real exchange rate misalignment. Thus, adjustment under the present monetary regime in the euro area is asymmetric and engineered through price increases in the surplus countries. It is, therefore, hardly surprising that the latter exert political pressure for fiscal austerity so as to put pressure for adjustment also on the deficit countries. Political leverage is relatively high when the deficit country is small. But it is low when the deficit country is large. When a large country resists external political pressure for fiscal austerity and wage adjustment, it can rely on the funding of internal and external deficits by the Eurosystem to avert financial collapse of the entire EU or even global financial system resulting from sovereign bankruptcy and large-scale bank failures in this country.

The ECB ATM in action

Recent data illustrate the above analysis. For the last year, more than three quarters of ECB loans have gone to banks in Southern European countries and Ireland (Chart 1). More recently, the liberal use of long-term ECB loans in France and Germany has temporarily reduced the share of the GIIPS countries in ECB lending. At the same time, the positions of national central banks in the euro area’s interbank payment system Target 2 show that these loans have helped to fund cumulated balance-of-payments deficits of the non triple-A rated countries versus the triple-A rated countries (Germany, Netherlands, Finland and Luxembourg). The latter country group has lent the former so far more than EUR900bn (Table 1). As long as the liberal supply of ECB funds to the countries with balance-of-payments deficits continues, the Target positions are likely to increase further. Until recently, liquidity flowing from the balance-of-payments deficit countries to surplus countries tended to be re-deposited at the national central banks of the latter. However, as Chart 2 for the case of Germany shows, liquidity has started to flow out into the non-financial sector (with the German banking sector turning again into a net debtor to the Bundesbank).

The case for exiting

By mid-year governments are scheduled to have completed the new EMU governance structure, including a new treaty on fiscal policy and a permanent crisis management mechanism. According to the governments, this is it. No further measures are presently being contemplated. Against this background, the recent suggestion by the President of the Bundesbank that the ECB begin a gradual exit from its non-standard measures and thus to raise pressure for balance sheet adjustment seems only logical. As of mid-year it is up to governments to restructure or unwind insolvent banks and to the permanent crisis management mechanism to provide adjustment funding to governments and banks, when needed. The present dual and contradictory support scheme—conditional lending under IMF/EU adjustment programmes and unconditional, unlimited lending under the ECB’s special refi operations—ought to be reconciled and merged into a unified support scheme.

It is, of course, possible that the new EMU architecture will not be able to deal with the remaining adjustment challenges. Even after its recent extension to some EUR800bn, the combined resources of the EFSF / ESM are unlikely to be sufficient to fund Italy or Spain in case markets shut down for these countries.1 But this would require further repair of the EMU architecture and could not justify an open-ended involvement of the ECB in propping up insolvent banks or governments. As we have argued before, we would favour the transformation of the ESM into a true European Monetary Fund with the mandate to implement and fund adjustment programmes for countries, facilitate debt restructuring for insolvent countries, and deal with systemically relevant banking sector problems.2 As part of a unified support scheme, this EMF would have access to ECB credit as a measure of last resort to deal with systemically risky liquidity crunches, whereby the final decision to extend credit would lie with the ECB.3

Exit from non-standard monetary policy measures could start by slowly raising standards for the collateral accepted by the ECB in its lending operations from their present extremely loose levels back towards more normal levels, and it could be completed potentially in a year’s time when the unlimited allocation regime is replaced by normal, limited allocations. With interest rates at record lows, the stance of monetary policy would of course remain very easy for the euro area as a whole.

The ECB’s non-standard monetary policy measures were taken to deal with problems in the financial sector and not to extend monetary policy easing beyond interest rate cuts, as was the case in the US and UK. Hence, these measures should logically only be continued as long as they promote efficient adjustment in the financial sector. The present regime of fixed rate, full allocation refinancing operations tends to ease the adjustment burden in the financial sector of countries with internal and external deficits and to shift the costs of rebalancing the balance of payments of EMU member countries to balance of payments surplus countries. Relative prices are adjusted by pushing prices in the surplus countries up without exerting downward pressure on prices in the deficit countries. With a new fiscal pact and permanent crisis management mechanism in place as of the middle of this year, it is now up to governments to engineer a more symmetrical adjustment. Should the new EMU architecture prove insufficient, governments should take the necessary additional steps and refrain from enlisting the ECB in making up for these deficiencies, in our view.