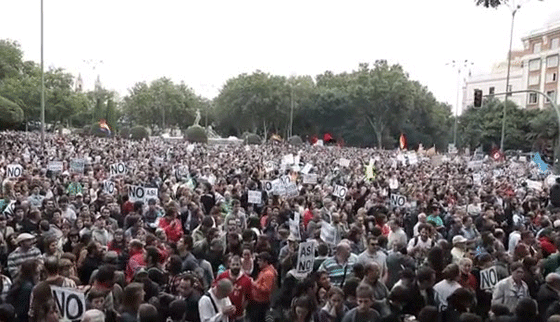 Over the past few weeks, Spain has received worldwide attention due to its deteriorating economy and growing outbursts of massive social protests. Most notably, US presidential candidate Mitt Romney said in his debate with President Barack Obama last week that he did not want his country to “go down the path to Spain.”

As the world fixes its eyes on the eurozone’s fourth largest economy, analysts continue to offer suggestions as to how to best tackle the Iberian country’s economic woes. However, the reason why Spain edging to the brink both financially and socially goes beyond matters of economic policy. Spain faces a graver problem, its political institutions.

Perhaps the most lamentable element in Spain’s political class is that it is hard, almost anecdotal, to find elected officials with a track record outside the public sector. For too many years, the country has been governed by bureaucrats who have no experience whatsoever in the real world of business. The majority of Spain’s politicians do not know what it is to conceive an idea, to risk one’s own wealth, to deal with banks, workers and suppliers, and, ultimately, to experience failure and success. Sadly, the Spanish taxpayer-financed political establishment understands failure and success only in terms of which side of the aisle their members are seated in parliament.

Furthermore, Spain’s political system is extremely sectarian and clientelistic. The concept of merit among the political class has been perverted into allegiance to the apparatus – and to the right leader within. Future political promises are embraced by parties when they are young and, years later, the chosen ones find themselves making decisions on public policy without ever setting foot in the real world: a group of individuals whose only interest is that of the party which keeps them fed and spoiled. Unfortunately, and to use Daron Acemoglu’s term, this type of “extractive” political institutions have contaminated other areas of civil society as well and have distorted a free society’s vital values of meritocracy and personal accountability from the educational system all the way to the business fabric.

A country governed by the unfit

If former Prime Minister José Luis Rodríguez Zapatero, an inexperienced attorney who joined the Socialist party at the age of eighteen, repeatedly made a fool of himself and of his country by his clumsy appearances abroad and flawed policies at home,it is simply because he was unfit to hold the office to which he was elected. Zapatero’s incompetence would be exposed early on his rise to power, indeed.

It was in 2003, during his first electoral campaign to Spain’s highest office, when Zapatero’s incompetence to lead the country would be exposed for the first time. A nearby media microphone caught him privately acknowledging not having a clue as to the economic concepts he had discussed in a speech a few minutes earlier. The microphone caught Zapatero’s then economic advisor in the Socialist party, Jordi Sevilla, pointing the errors the would-be prime minister made during his speech while assuring him that all he needed to know about the economy could be learned over “a couple of afternoons.” The Socialist candidate then responded that, despite his ignorance, he “liked” matters of economic affairs.

After the socialists’ disastrous leadership, the bureaucrat with less-than presidential stature and charisma, Mariano Rajoy, was seen by many as a major ‘upgrade’ to replace Zapatero at the La Moncloa palace. Rajoy entered public service at the age of 23 and served as minister of education and deputy prime minister under the leadership of tax collector-turned politician José María Aznar.

The Popular party’s leader to succeed Zapatero promised less red tape, lower taxes, an overhaul of the regional government system to limit its size and do away with the – literally – thousands of state companies plaguing the economy, provide tax incentives to entrepreneurs and, all in all, all of the right-sounding policies voters wanted to hear. It took Rajoy exactly ten days since formally being appointed prime minister by the Spanish parliament to begin to betray each and every single one of those promises.

While we have been covering Rajoy’s sinking rate of approval and the questioning of his democratic legitimacy, perhaps it would be best to illustrate how one of his government’s flip-flop policies have resulted in the country taking a deeper dive into economic abyss and fueling social outrage: the fiscal devaluation that never happened.

Broken promises breaking up the country

During his political campaign, Rajoy promised not to raise taxes, but to actually lower them if he could (while in the opposition he criticized Zapatero, quite rightly, that raising taxes in the midst of an economic recession was irresponsible). A few months after imposing a severe income tax hike across the board, Rajoy’s government announced an increase in the national Value Added Tax (VAT) that would raise such a levy to as much as 21 percent in most goods and services (there are reduced rates for certain types of products and services, but those have also suffered increases). The government would later follow up such a tax increase with a lowering of social security charges for employers. All in all, given the impossibility of executing a policy of currency devaluation, a fiscal devaluation would make the country more competitive in foreign markets and boost exports.

The increased VAT measure is hitting domestic consumption, which was already suffering from the previous hikes and wage cuts. However, the lowering of social security charges for employers is nowhere to be found. In line with Rajoy’s government’s language, everything is either temporary (tax increases), or soon to come (tax cuts and major reforms). The reality is, however, that the fiscal devaluation that never happened has exacerbated the economy’s downturn: higher taxes have led to higher inflation and lower domestic consumption, which in turn has led to an increasingly stalled economy and higher unemployment.

If, besides an incoherent economic policy, we take into account Rajoy’s poor handling of the ‘banking sector reform’ (an euphemism for a bailout of insolvent banks), his incomprehensible maneuvering around an imminent European sovereign bailout, and the separatist calls coming out of the Basque and Catalonia regions, in less than ten months the Spanish premier may have inflicted more harm to the country than his Socialist predecessor did during his 7-year mandate. In addition, Rajoy is doing a terrible disservice to the solemn ideals he and his political party claim to represent: limited government, economic freedom and meritocracy.

While nobody knows exactly what Rajoy’s economic strategy is, what is hurting the country the most – even risking breaking it apart – is the widespread sentiment that Rajoy simply has no idea of what he is doing.

The Spanish civil society is wise

Many observe that the excesses of the past, for which Spain and other European countries are now paying dearly, largely stem from an imperfect monetary union: a currency which produced a mirage of equality and harmony among highly divergent market competitors. In the case of Spain, the most damaging effect the euro-bubble has caused, however, is that it has helped to mask many of country’s structural problems and has made it possible for a cancerous political class to spread and infect virtually all areas of society. Spaniards, however, are wise and seem to have arrived at the correct diagnosis as to why their country is failing.

Last years’ protests in Madrid’s emblematic Puerta del Sol square gained global attention as then Prime Minister Zapatero was ready to call snap elections and hand over the power to Rajoy. Then, one of the demonstrators’ popular rally cries was “they don’t represent us.” Last week, on September 25, Spanish demonstrators did not protest in a square or sought to “occupy” a bank or the stock market. Instead, they took their protests to the entrance of the national parliament.

When the government tried to criminally prosecute the organizers of such demonstrations before parliament, the judge assigned to the case dismissed it. The judge in question, Santiago Pedraz, wrote in his ruling that the protesters were exercising their right to freedom of speech, and that it was no crime for citizens to call for the members of parliament’s resignation, or even the abolition of the current regime, even when such calls questioned Spain’s current constitutional system. To the surprise of many, Judge Pedraz took his legal argument one step further and framed his decision in the context of the current “decay of the so-called political class.”

Spaniards are now rejecting the cynical notion that the current confiscatory policies that aim to bailout an insolvent system managed by morally-insolvent politicians is anything but “austerity,” and that a petulant government which systematically does the opposite to what it says does not have a place in a free and democratic society.