The Paucity of Growth

The “Platinum Coin” and the Debt Ceiling

A one-word explanation on why the eurozone cannot inflate its way out of trouble: Spain!
Publicado el 26/04/2012  Peter Tchir  debt crisis , Economics

When did Austerity Become a 4 Letter Word?

Some forms of “austerity” have minimal near term impact yet are crucial for the long run. 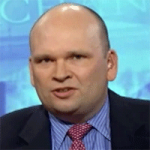 Suddenly, everywhere you look, “austerity” has become a 4 letter word. Clearly it wasn’t excessive spending that caused too much debt. Surely we didn’t hit a financial crisis in spite of excessive spending, nope, it is all the fault of austerity.

In the rush to avoid supporting anything that could be viewed as “austerity” we have lost sight of what austerity is, and how it can impact the economy.

Is pushing the retirement age from 55 to 57 “austerity”? I don’t see how making decisions like this is bad. It has very little impact on the economy today, yet is a crucial step to creating long term fiscal balance.

Is cutting retirement benefits, starting in 5 years “austerity”? Once again, the near term impact is minimal, and while painful, is a necessary step towards long term sustainability.

Is firing government employees “austerity”? While necessary in the long term, the immediate impact on the economy may not be worth it. Maybe bloated governments need to be dealt with, but over time.

Are programs designed to enforce the tax code “austerity”? Collecting these taxes will take money out of current spending, but the people holding this money by not following the tax laws don’t deserve to have it. It is necessary to create a culture of fairness.  This is money that was supposed to be the government’s anyways. You might not like what the government does with the money (do any of us?), but programs that enforce existing tax codes should not be cancelled.

Are unemployment benefits “austerity”?  This gets a lot trickier. The short term impact would be to take money out of the economy, as people are likely spending this money as they get it. Yet, if the benefits are too good, are people choosing unemployment with benefits over work?

Are cuts to health care “austerity”? A very touchy subject, yet the reality is this is an area that needs to be addressed. There has to be a balance between ensuring people can have access to great healthcare and that the system is sustainable and the cost/benefits don’t get out of control. In Greece, doctor’s were force to file things electronically or risk not getting paid. Funny how quickly doctor’s were able to computerize their offices, bringing costs lower, in spite of what looked like an “austerity” program.

So, let’s not let politicians get away with claiming everything that is “austerity” is bad. It isn’t. Some forms of “austerity” have minimal near term impact yet are crucial for the long run.

Then let’s look at the long run. Dr. Krugman had a piece today that highlighted the correlation between “austerity” and GDP growth. It showed that more “austerity” (however it was defined) meant slower growth. Doesn’t take a PhD to figure out that GDP is consumption based, and a cut in spending would reduce GDP. 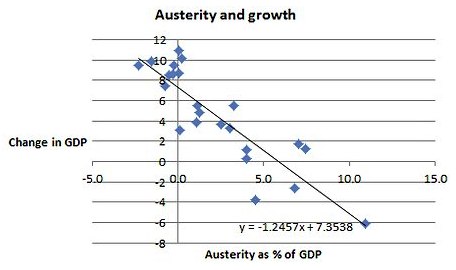 What this chart, and so many other fails to do, is analyze what the impact is two years down the road. Countries were all busy spending throughout the 2000’s and here we are with a debt crisis. Too much debt is impeding the ability to grow. If a farmer planted a seed and the next day gave up in disgust because there were no crops to harvest, we wouldn’t have any food. Programs and policies take time. It is obvious that spending provides a bigger short term boost than cutting spending. It is far less obvious, that a year from now, the adjustments made to deal with the spending cuts won’t create a better future.

We too often confused “conjecture” with “fact”.  Lately I have seen a lot written about how much better the job situation is today than it would have been without all the policies of Obama, Geithner, and Bernanke. It is treated as fact, yet it is merely conjecture. I will admit in the quarter the policies were applied, it made the situation in that quarter better than it was. We cannot know whether we are better off now than had we followed some alternative path. Maybe waiting to apply the policies would have created a bigger effect – the “wait until you see the white’s of their eyes” theory. Maybe allowing more banks to fail would have created a wave of new lending institutions that aren’t in competition with subsidized zombie banks. We don’t know. Economics is guess work. There are competing reasons in economics because with some data, some math, some simplifications, and some logic, both sides of a coin can sound good. The theories can’t be put to a proper test. There are no 3 identical economies where you can leave one alone (the control) and apply the competing theories to the other 2 economies and see which theory is correct.

We need to take a longer term view to determine the best solution and we need to critically analyze what has been done and not just assume alternative paths would have led to a worse current situation.