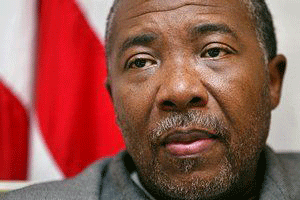 Washington, D.C., April 26, 2012 – The former Liberian president Charles Taylor today became the first head of state since Nuremberg convicted by an international court for crimes against humanity, for his role in the decade-long Sierra Leone civil war; and his human rights abuses in Liberia from 1990 to 2003 were likely even more systematic, according to declassified U.S. government documents posted today by the National Security Archive at www.nsarchive.org.

The U.S. Embassy Monrovia began one Confidential 2003 report during Taylor’s last year in office by noting, «A few months ago, The Economist magazine dubbed Liberia as the worst place in the world. Things have declined since then.» The cable went on to report, «The Taylor regime is like a wounded shark feeding on its own entrails.»

A subsequent Confidential Embassy cable from June 2003 described the constant threat of Taylor’s «bully boys» and «security thugs»going on «a killing spree in Monrovia,» in reaction to the original 2003 indictment by the UN-backed Special Court for Sierra Leone, whose judgment was announced today in The Hague.

The CIA reported as early as February 1990 in its Africa Review – then classified at the Secret level and since released under the Freedom of Information Act to the Archive – that Taylor’s insurrection in northern Liberia against then-dictator Samuel Doe had generated a refugee crisis because of both «Army and rebel atrocities,» including «ethnic score-settling» and «deliberate attempt[s] to stir up tribal animosities.»

A subsequent CIA analysis in May 1990 provided a Taylor biography noting his «alleged large-scale theft of government funds and coup plotting» during his 1983 tenure in the Samuel Doe government, admitted that the CIA had previously «underestimated» Taylor’s leadership skills and likelihood of success against Doe, and predicted «the rebels would indiscriminately begin slaughtering Krahns [Doe’s ethnic base], seeking retribution for Army atrocities committed against their fellow Gio tribesmen.»

The Department of State’s Bureau of Intelligence and Research considered the question «Liberia: Genocide?» in a Secret 1996 assessment that described «wholesale killings of civilians» both by the Liberian armed forces and by the various militias including Taylor’s, prior to his assuming the presidency of Liberia in 1997. 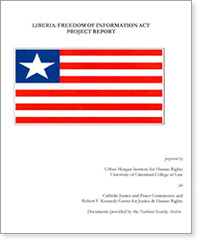 The documents posted today were obtained by the Archive through the Freedom of Information Act, in a multi-year systematic requesting project in support of the 2006-2009 Liberian Truth and Reconciliation Commission, and in partnership with human rights advocates and investigators both in Liberia and internationally including the Robert F. Kennedy Memorial Center for Human Rights. Today’s posting also includes a detailed analysis – written by the Urban Morgan Institute for Human Rights at the University of Cincinnati Law School – of more than 1,000 declassified documents released through the Archive’s FOIA requests on specific atrocities committed during the Liberian wars.

This report, complete with an inset photograph of «Dissident Leader Charles Taylor,» warns that «Liberian President [Samuel] Doe’s hapless army remains unable to suppress a seven-week-old tribally based insurrection.» The CIA reports that the fighting had not yet threatened Doe’s immediate hold on power, but predicts that Liberia «will remain unstable… aggravating ethnic animosities, regional tensions, and US-Liberian relations.»

The CIA estimates that President Doe «is almost certain to fall» to Charles Taylor. The Agency predicts that the regime change will «usher in a period of anarchy and ethnic bloodletting, especially in Monrovia.» This Estimate also includes a biography of Taylor, which describes him as an «Americo-Liberian descended from freed US slaves.» In 1983, he fled Liberia to the United States and was arrested in the US at the behest of the Liberian government. According to the CIA estimate, he escaped from jail and «a US warrant for his arrest is still active.»

This DIA cable summarizes the travails of Liberian child-soldiers and provides possible methods for their reintegration into society, in conjunction with the Liberian government and UNICEF. The cable reports that child-soldiers were employed by «all warring factions in Liberia» because children were «easily controlled and naturally obey adults.»

This Department of State assessment concludes that «it is difficult to determine to what extent the mass killings in Liberia… are genocidal.» The INR recounts that hundreds–if not thousands–of civilians had been killed by all sides during the civil war. The assessment hedges, «Ethnic hatred is deeply rooted and widespread in Liberia, but this does not necessarily equate to organized genocide.»

As rebel groups in both the north and south advanced on Taylor in Monrovia, US Ambassador John W. Blaney warns the US Secretary of State Colin Powell that «Liberia is going into a dangerous national meltdown, including increasing ethnic violence and spreading humanitarian crisis.» He reports that, «Taylor is under intense pressure, but will cling to power longer because he fears the UN’s War Crimes Tribunal in Sierra Leone.» Blaney warns that the «wildfire of ethnic and tribal hatred may soon burn uncontrollably.» The ambassador cites an Economist article that dubbed Liberia «the worst place in the world,» and expounds, «things have declined since then.»

Two months after the previous cable, Taylor travelled to Accra, Ghana to participate in peace talks with opposition rebels. Upon Taylor’s return, Ambassador Blaney wrote that fighting had temporarily ended in Monrovia, but «politics may never again be business as usual, []unless and until a credible international stabilization force is established.» The ambassador recounts that Taylor’s «bully boys» continued to terrorize anyone they perceived as «anti-Taylor.» According to one Liberian source, «These militia boys just don’t care… They just start shooting everywhere, into the homes of people they think oppose their leader and innocent people get shot too.» In July of 2003, rebel groups launched an assault on Monrovia which forced Taylor into exile in Nigeria; in 2005, Liberia held elections widely regarded as free and fair.

In 2006, the newly elected president of Liberia, Ellen Johnson Sirleaf, requested Taylor’s extradition from Nigeria. Upon his arrival in Monrovia, Taylor was transferred to the custody of the United Nations and flown to Sierra Leone to stand trial at the Special Court for Sierra Leone for war crimes and crimes against humanity.