Germany’s new raw materials policy: Late, but not too late

The escalation of the euro debt crisis has triggered a EUR/CHF rally with the CHF appreciating 20% since early 2009. The Swiss National Bank (SNB) intervened massively to prevent further appreciation – currency reserves more than quadrupled – without really stopping the trend. In September 2011, eventually, the SNB announced it would defend an explicit floor of 1.20 CHF/EUR – which has not been breached since. 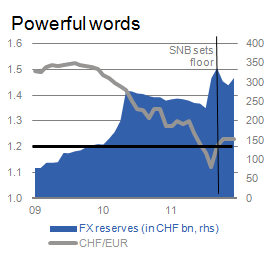 Currency reserves actually declined following the announcement (CHF 311 bn in December, down from CHF 337 bn in September), suggesting that substantial interventions by the SNB have not been necessary to defend the floor. It appears that the announcement itself has been powerful enough to sway market participants. This in turn suggests that much of the rally back then had been fuelled by speculators betting on an ever dearer CHF rather than pure safe-haven flows: such a bet is futile as long as the floor is credible. Since the SNB has in principle unlimited access to CHF and inflationary pressures continue to be minimal, there is little reason to question this floor. Despite the strong CHF, Switzerland will likely run a huge current account surplus of more than 12% of GDP this year.

ETF regulation: For now, issuers breathe a sigh of relief

Last week ESMA published a consultation paper setting out future guidelines on Exchange-Traded Funds (ETFs) and other UCITS-related issues. In presenting its proposals, ESMA is responding to concerns that emerged during the crisis about potential counterparty risks in swap-based ETFs which had not been recognised by many investors prior to the crisis. The proposal aims to increase transparency for investors and sets out rules for the use of swap contracts and securities lending.

The proposed rules would result in manageable changes to the existing framework. In particular, ESMA has not classified ETFs as complex products, which for the time being leaves ETF eligible for marketing to retail clients. Furthermore, issuers are not required to label their products as either physical or synthetic. Possible restrictions on the marketing to retail clients will be dealt with by Mifid II, which in the current proposal excludes ETFs from execution only. Rules on ETFs may change in the course of consultation, before being finalised in summer at the earliest.

The ECB can’t please everybody

While probably even the ECB is watching the market-soothing effects of its first EUR 489 bn 3y-LTRO with some astonishment (10y spreads over Bunds have come down by 160 bp, 90 bp and 115 bp for IT, ES and IRL respectively), last Thursday’s policy change to allow 7 NCBs to accept lower rated bank loans as collateral has triggered the naysayers’ Pavlovian response regarding “too generous liquidity”.

Take a chill pill! President Draghi pointed out that the measure will in particular enable smaller banks, which are important for SME financing, to participate in the next LTRO. Before the crisis these banks did not tap the ECB for refinancing, but used national interbank markets which are currently in deep freeze. Plus we are talking about EUR 600 bn, which will only be accepted by the NCBs with a 2/3 haircut, allowing a theoretical EUR 200 bn increase in refi-lending. Compared to the current refi-lending of slightly above EUR 800 bn this might look like a lot, but a comparison with the estimated EUR 14 tr of eligible assets (which are, however, not distributed evenly within the banking system) puts it into perspective. It might also help to reduce the EUR 100 bn-plus in ELA lending still sloshing around, where we really have no idea about the quality of the collateral that has been used and hence the potential risk for the NCBs. But while the NCBs of all other problem countries have asked the ECB for this measure the Central Bank of Greece is surprisingly absent. That could be a further confirmation of the administrative apparatus’ dysfunction or an indication of the quality of assets still available in Greece.