The ifo index increased for the fourth time in a row last week and beat market expectations by an average of 1pp over the last 4 months. In addition, the German PMI also released last week was expansionary during the last 3 months. 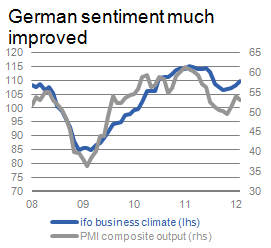 With sentiment in Germany significantly improving over the last 4 months, better EMU PMIs as well as some positive steps regarding the sovereign crisis we are sometimes asked when we would raise our GDP forecast for 2012. Indeed, the above facts moved the risks to our GDP forecast (+0%) clearly to the upside and even risks of a technical recession in H1/12 look less pronounced. However, soaring sentiment might include some overshooting in reaction to the overly depressed mood last autumn when uncertainty regarding Greece and the Euro reached its max. We therefore believe that it is too early for a revision. In addition, our optimism is based solely on survey data for now, while the latest hard data from December was very weak and Jan. data (orders and production) might be scrambled by seasonal factors. Furthermore, GDP components released last Friday show that exports were down 0.8% qoq in Q4. With especially export orders still contracting quickly in February according to German PMIs and the EMU PMI better but still below 50 in February, foreign demand is likely to remain weak at least through Q1. Therefore, growth in 2012 will likely be dominated by contributions from domestic demand (private consumption and construction), which is corroborated by ifo data being much better for domestic sectors than for the export-dependent manufacturing sector.