Straightening Out the Strait 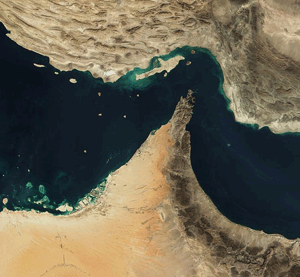 Recently some of the fears that investors had focused on in the 11th hour debt negotiations in Greece have drifted southeastward towards the Strait of Hormuz. An increasingly bellicose Iran threatens to throw the world economy into confusion with the potential closure of one of the world’s most important sources of energy. Catastrophic failure in Athens or the Gulf could plunge the world into severe recession if not depression. Having discussed the Eurozone at length, we focus this week on the threats posed by Iran.

Some twenty percent of the world’s oil supplies pass through the Strait of Hormuz, which lies between the Hormozgan province of Iran and Northern Oman. Some 230 miles of heavily fortified Iranian coastline, which includes the Iranian naval base of Bandar-e ‘Abbas, dominates the Strait. Although U.S. and allied naval ships are deployed in force around the area, a mass attack of small missile equipped marine craft would present a serious threat. Even the deployment of Russian made, remotely detonated sea mines could close the Strait for weeks if not months. In such a situation the price of oil could skyrocket, acting as an additional tax on a sputtering world economy.

As Iran struggles with increasingly painful international sanctions stemming from the nearly universal opposition to its nuclear ambitions, and as it courts the possibility of an Israeli strike against those facilities suspected of developing nuclear weapons, it is desperately searching for a counterweight to keep its enemies at bay. It likely sees its control of the Strait as a means of economic blackmail. Unfortunately for the Iranians, even if it could resist the naval power of the United States and its allies, such a blockade would inflict even greater proportional harm on its own economy.

However, it is important to note that if a confrontation were to unfold, the possibility for an Israeli strike increases significantly. Such an attack, which could possibly involve nuclear tipped munitions, would draw worldwide outrage. Furthermore, even if Washington were to condemn such an attack in its harshest terms, the Arab world would assume that the Israelis acted with full support of the United States. They would likely be right.

This whole sorry picture brings into focus the ill-judged and hugely expensive pre-emptive attack on Iraq in 2003 and the arrogant extension of the war in Afghanistan beyond the so-called al-Qaida to the Taliban. Another Western attack on a sovereign Muslim country would further embolden jihadists around the world.

America and its allies are currently withdrawing from Iraq and Afghanistan without achieving the strategic objectives that put the troops there in the first place. Indeed, the situation on both fronts is considerably worse than it was before the invasions. As evil as he was, Saddam Hussein was the strong man of the Middle East, who held Iran in check.

Today, Iran dominates the chaotic situation in Iraq. Furthermore, it now holds sway over much of Afghanistan, where the Allied campaign has failed to deliver a victory. Instead, our involvement there has opened the door for Iran and has widened the rifts within Pakistan, which is now much more likely to collapse utterly in the wake of our eventual withdrawal from the region.

These strategic setbacks to the east and west of Iran have severely limited Washington’s leverage with Tehran and have emboldened the ayatollahs to adopt a more confrontational stance. Just a few months ago, the Iranian government organized (through poorly disguised proxies) a pointless attack on the British embassy which resulted in a rupture of diplomatic relations between the two countries. Such moves may be designed to increase international concerns that Iran is simply reckless and unpredictable.

While talking tough, the U.S. is showing ever greater concern with the possibilities of an uncontrollable Iran. There has been increasing chatter that President Obama is now prepared to talk directly with Tehran, a willingness that may upset other anti-Iranian allies such as Turkey and Saudi Arabia. If the Saudis feel sidelined or if they come to see the U.S. as an unreliable guarantor of Middle East peace, they may decide to abandon their long held support for American policy interests.

As a result of the diplomatic mess, investors should consider the renewed possibility of armed conflict in the Persian Gulf. It should not be ignored that, in a possibly tight election this fall, a «wag the dog» scenario with Iran is not beyond the realm of possibility. A war, or even an escalation in tensions, could be a deciding factor in allowing an incumbent president to maintain power. By secretly encouraging conflict, a sitting president could find substantial political benefit, even while maintaining dovish rhetoric. Although Obama came to office promising change, some things never do.

In light of these persistent concerns (as well as recent OPEC pronouncements that $100 oil poses no threat to global economic health) investors should harbor no illusions that the recent surge in petroleum prices will ebb anytime soon, if ever. Investments that offer exposure to non-Middle East petroleum should beckon.