The bond market has always had clever names for bonds in specific markets. Eurobonds, Yankee bonds, Samurai bonds, and now, Ponzi bonds. I’m not sure what else to call these new bonds, but Ponzi bonds seems as good as anything. 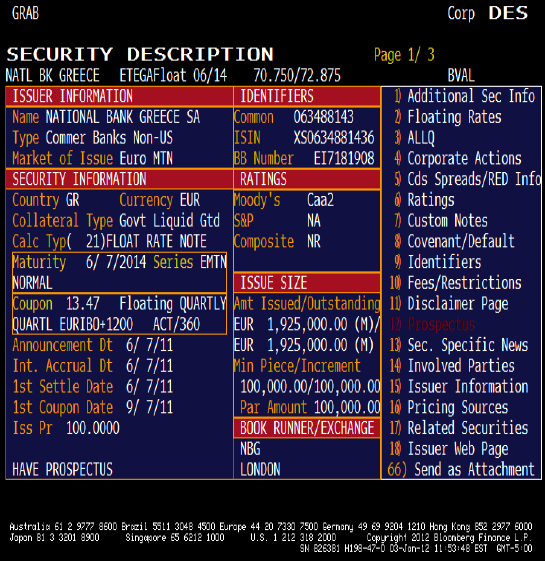 I couldn’t find the new National Bank of Greece Preferred bond that was issued to the Greek government, but I did find a bond that was issued back in June. Euribor + 1200 may seem like a big coupon, but I cannot imagine that any actual investor bought these bonds. The fact that NBG is the “book runner” of this bond is further demonstration that no real account bought these bonds – back when NBG sold actual bonds to actual institutions it hired banks like DB to lead the deals for them. As further evidence of the “special nature” of these bonds is that the “Collateral Type” is “Govt Liquid Gtd”, which means the Greek government guaranteed these bonds. So just like the Italian bonds, NBG issued these bonds to themselves, got a Greek government guarantee (how can a country that can’t borrow, provide a guarantee?) and took these bonds to the ECB to get some financing. The ECB won’t buy National Bank of Greece bonds directly, they won’t buy Hellenic Republic bonds in the primary market, but they will take these ponzi bonds as collateral? Not only have they gone with form over substance in skirting around rules, but they have clearly thrown out any reasonable attempts at being prudent with the use of their balance sheet. Where do these guarantees show up? Is anyone out their negotiating the haircut on these bonds? Probably not since somehow a guarantee doesn’t count. Yet NBG is likely at the PSI negotiating table since they own actual Greek debt in addition to these ponzi bonds. All very confusing.

NBG has now issued preferred bonds to the same bankrupt country. The bankrupt country provided €1 billion of capital to the insolvent bank. Whether the country got the money by posting the bonds to the ECB as collateral, or from their last tranche of TROIKA money, I don’t know. What I do know is that NBG is trying to use that money to buy back bonds and preferred shares at a discount to par (where they carry them at). Those purchases would generate profits for the bank as they would book the difference between par and purchase price as income. That would increase their equity capital. In the case of preferred bonds/stock they buy back, I’m not sure how much of a benefit they get as retiring those issues would reduce capital by the face amount, but it certainly works on straight debt. The scary part is that you can almost see the logic behind it. You can see how they are attempting to use what little firepower they have left to keep the bank alive and pretend like all is good. Yet, it is sacrificing the people and the country for the good of the bank. Does Greece really benefit from buying these bonds/preferreds? Greece has NO money! Greece is living bailout to bailout yet, is finding ways to help the banks meet regulatory requirements. Why are existing lenders letting Greece pile on more debt to save the banks? I just don’t see how this works, and I really don’t understand how the IMF (US Taxpayer) can be comfortable with Greece using money to buy National Bank of Greece bonds. 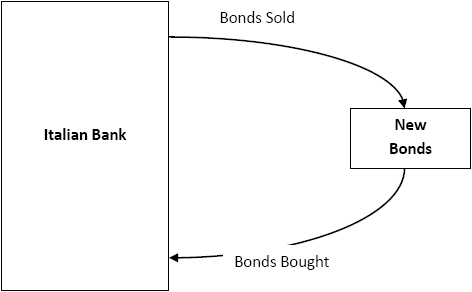 So after the bond purchase and sale, we have a bank with a matching asset and liability.

So the next step is for the Italian Bank to get a guarantee from the Italian government. I assume there is some cost to this, but haven’t bothered to check because frankly the fee is small relative to the benefits received.

Now the bank participates in LTRO and pledges the guaranteed bonds to the ECB.

The ECB loaned money to the Italian Bank. The ECB deems it as “safe” because they received a bond Guaranteed by the Italian Government as collateral. The Italian Bank gets money from the ECB, pays itself money on the bonds it issued, and owes the ECB interest on the money they received. The Italian government is happy because they didn’t issue any debt, yet used their guarantee (which somehow they seem to think doesn’t count against them) to get one of their banks much needed money.

It is one thing to read about how the ECB’s deposits have skyrocketed since LTRO, but to look at balance sheets of the entities involved makes it even more mind-boggling to me.

But this is where it gets really good. The Italian Government and the ECB both put pressure on the Italian Banks to use at least some of the money to purchase Italian Government bonds. Surely some of the money will be used for other purposes (it won’t permanently be lent to the ECB), but at least part will be used to help Italian banks finance existing Italian government bonds or to buy new ones.

So, here is what the world now looks like. The Italian government has some money. The Italian Government issued bonds AND guarantees to get that money! If they could have issued bonds directly to the ECB they would not have incurred the Guarantee. The size of the guarantee is likely to be larger than the Italian Government Bonds proceeds since even Italian banks won’t use all of the LTRO money to buy Italian government bonds.

The banks have cheap funding via the LTRO facility and some assets against it. They pay an interest rate on the “new bonds” they issued, but receive that money back via the repo agreement that is part of the LTRO. They are the proud owners of Italian government bonds with cheap financing. They could have bought the bonds directly, except they cannot borrow cheaply. Yes, the market had made some attempt to charge banks with bad risk management, awful assets, and opaque books, more than they charged the country they were domiciled in. But rather than let the market (and common sense) rule, a mechanism to let banks fund themselves cheaper than the countries they rely on, was created.

The ECB has apparently created money, and can pretend as though they didn’t print money, and also pretend that they didn’t participate in financing sovereigns directly in new issues (I guess).

Countries and Their Banks are Becoming Indistinguishable

Asides from giving Ponzi a bad name (at least until the ECB just admits that they are printing faster than even Big Ben) this is tying the banks and the countries ever closer. A long, long, time ago (1 month) it was conceivable that a bank could fail and the sovereign survive. That is becoming less clear. Whether Italian Banks use all of the LTRO proceeds for new sovereign debt is relatively immaterial, since they already hold lots of Italian government debt. It was always very difficult to see how an Italian bank could survive a default (or haircut or restructuring) by Italy. They just had too much exposure in addition to their other weak holdings.

It was possible to imagine the sovereign surviving a bank default. A default by any individual bank didn’t necessarily bring the sovereign down. It would likely drag other banks down and put pressure on the sovereign and the ECB to take drastic measures to support the banking system, but there was a real chance the sovereign (even one without money printing capacity) could survive. But that may no longer be the case with LTRO and the Ponzi Bonds. Once a bank defaults, the ECB would rely on the government guarantee. The government debt burden would increase by the amount of that guarantee. In addition to having to get new money into the rest of the banks, the markets would certainly start pricing in all of the other guarantees the government had made via this program. The pressure on the surviving banks would be more than it would have been otherwise because investors will know they relied on government guarantees to remain solvent.

This program seems to ensure the destruction of the entire banking system and the sovereign if any reasonably large participant fails. We have gone for “sovereign ceiling” to “weakest link” in terms of credit. If this program become common and larger, we have effectively linked all the banks in the system, and the sovereign, to the WEAKEST bank. Maybe that is an overstatement as this time (the program is new, and it isn’t huge yet) but it is already material and threatens to grow. Intesa Sanpaolo did €12 billion this time around. Their equity market cap is only €22 billion. If all of the banks defaulted and Italian government debt went up by only €40 billion, maybe the market could handle it. But this is just the first time Italy has done this. Another LTRO is coming up. We have also seen that Greece is using this “methodology” to get money to the banks via programs other than LTRO.

As an investor, unnecessary complexity and off-balance sheet obligations scare me. What is going on in Italy is limit long unnecessary complexity and has a decent amount of off-balance sheet contingent liabilities to go along with it. Similar ideas seem to have worked in Ireland, have helped Greece keep NBG alive, and the program is not yet large (that we know of), so I’m not panicked right now, but I would start evaluating Italy from the weakest link perspective much more than trying to figure out “what dirty shirt is the least dirty”. Greece had all sorts of ways to hide debt before anyone was looking too closely. Clearly other countries are learning, and who knows what they already have hidden that hasn’t come to the surface (Spain did just miss their deficit by a full 2% points with zero warning).