Productivity, The Miracle of Compound Interest and Poverty

How long can lower provisions cover for the sluggish credit environment?

— With interest rates likely to remain at depressed levels for years to come in most developed banking markets, the focus is on the impact this may have on interest margins and banks’ net interest income.

— Historical data for the US shows that with a flattening of the yield curve, margins face significant pressure as long-term rates draw closer to short-term rates. This margin compression is exacerbated as funding costs approach the zero bound, while asset yields continue to fall.

— Whether the recent uptick in US commercial lending volumes will compensate for the negative price effect from lower interest margins on overall net interest income remains in doubt.

The US banking industry in 2011 was a strongly profitable one: return on assets rose across banks of all sizes and net income was close to pre-crisis levels. A closer look, however, reveals this profitability was mainly a result of lower loan loss provisions. Provisions declined year-over-year for the ninth consecutive quarter, but now appear to be levelling off. Whether or not banks can continue these profitability trends remains a key concern in the near term given sluggish credit growth and a lingering low-interest rate environment.

Despite the growing importance of non-interest income sources such as fees, much focus is currently on banks’ primary revenue driver, net interest income (which, in 2011, represented more than 64% of total US bank revenues). Net interest income is a reflection of banks’ traditional earnings strategy: the rate spread between borrowing short and lending long, or more broadly the differential between asset yields and funding costs. In previous recessions, bank balance sheets benefited from lower interest rates as funding costs dropped more quickly than asset rates. In fact, US banks expanded net interest income by 7% p.a. between 2007 and 2010. As low rates persist, however, loan-to-deposit spreads fall as prices adjust, and longer-term securities, held as assets, roll over to lower-yielding securities (the same holds true on the funding side, of course, helping to extend the positive impact of falling interest rates into the future). The net impact on banks’ net interest levels may be negative, though. In previous recoveries, this effect has been offset by increased loan volumes, allowing banks to return to sustainable growth levels. Furthermore, as an economy recovers, banks may quickly benefit as short-term assets roll over at higher rates.

The current banking environment is not conforming to history, however. The initial benefit of low rates has waned without the concurrent growth in lending. Although funding costs continue to decline, they may not be enough to offset lower asset yields and they are approaching a limit of zero (see chart 1). With the Fed announcing no intention to raise rates until the end of 2014, this limit could quickly constrain bank profitability. Although there are indicators of a pick-up in lending across recent quarters, it may not be enough to make up for the compression in net interest income. Furthermore, alternative revenue drivers like non-interest income so far have not provided much support. 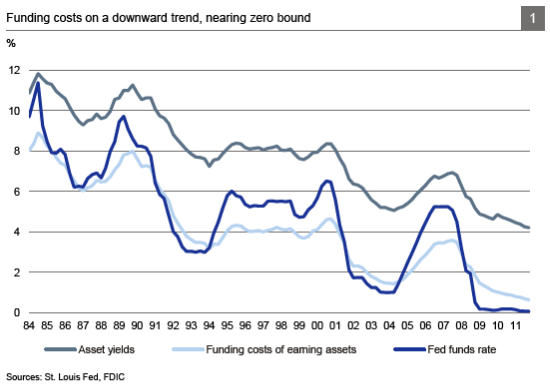 Net interest margins (defined as net interest income over average earning assets) were 3.6% at year-end 2011, just 11% higher from the 20-year low of 3.2% in the last quarter of 2006 (see chart 2). After the initial benefit from low rates, net interest margins are likely to continue to trend downwards as funding costs bottom out and asset yields continue to fall. The chart below demonstrates that net interest margins spiked not only after the most recent crisis but also during previous recessionary rate environments, as evidenced during the US recession in the early 1990s and again in 2001-02. In the second half of the 1980s, the decline in inflation and the reduction in the Fed funds rate led to a corresponding surge in net interest margins. 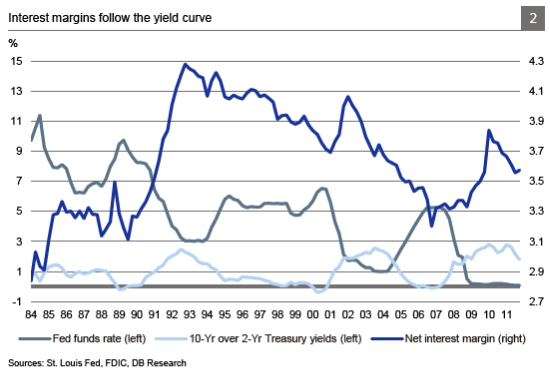 Considering rates are likely to be sustained at low levels for the foreseeable future, how long can lower provisions cover for the sluggish credit environment? In recent quarters, banks have benefited from lower reserves to protect profitability, but indicators show that this trend is levelling off. It is clear that loan growth will be the critical factor to offset the negative impact of interest rates. Lending, driven primarily by commercial and industrial loans, grew for the third consecutive quarter through the end of 2011. Nevertheless, the housing market remains sluggish and it remains unclear whether the increase in non-consumer credit volumes will compensate for a lower net interest margin in the near term.