It does not bode very well that Spanish banks have reportedly already used up their additional ECB funds to buy domestic public debt. 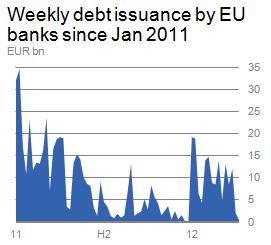 The ECB’s two LTROs had vastly lifted market sentiment and made refinancing at reasonable rates possible again for EU banks. The Euribor-Eonia spread fell from its recent peak of 100 bp in early December to currently just about 40 bp. Yet, due to renewed doubts about Spain, new issuance nearly collapsed in the first half of April. Granted, this was also driven by shorter trading weeks around Easter, but it shows how vulnerable markets remain. It does not bode very well that Spanish banks have reportedly already used up their additional ECB funds to buy domestic public debt. However, thanks to the ECB and healthy issuance in Q1, most banks should be able to cover their redemption needs for the rest of the year (a total of EUR 336 bn for EU banks) by using their impressive existing liquidity reserves (incl. deposits at the ECB of EUR 758 bn).