This article was originally published in El Confidencial in English. 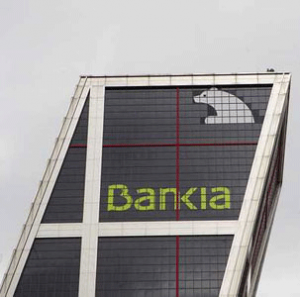 Last week, the Spanish government carried out the biggest financial bailout since the outbreak of the economic crisis. BFA-Bankia (BKIA), the giant which resulted from the merger of seven savings banks only a year and a half ago, was nationalized by Prime Minister Mariano Rajoy’s government through the conversion of a 4.5 billion euro holding of preferential shares into equity.

As part of the bailout, and as part of a more comprehensive effort to reform the country’s ailing financial sector announced on Friday, the bank will need to provision additional taxpayers’ money (7-10 billion), which will come in the form of contingency bonds (CoCos).

Bankia has put Spain’s financial system under scrutiny from investors and analysts worldwide who worry about the country’s capacity to strengthen its banks while adopting harsh fiscal consolidation policies in the midst of a recession. However, among the many questions raised by Bankia’s nationalization in extremis, there is one that cannot go unanswered: who is responsible?

This should not be a rhetorical question, since the answer reveals much about the causes of Spain’s current state of economic affairs.

Too intimate a relationship

The Spanish savings banks (cajas de ahorro) became a cause for serious concern in the aftermath of the bursting of the property bubble and the economic downturn in 2008. De-regulation and increased political mingling has turned this 150-year-old fixture in the Spanish financial system into the epitome of incestuous relationships between government and finance.

Managed by boards composed of regional politicians, the Spanish savings banks became a precious instrument of political power, which, during the years of the housing boom, were subject to further abuse by the reckless granting of loans to local builders and the financing of the most pork-barreled public infrastructure projects.

The Caja de Ahorros del Mediterráneo (CAM) stands as the poster child for the politically-controlled savings banks’ credit feasting. Its failed transactions can be found as far as Mexico.

Considering that 80% of the banking system in Spain is managed by unions and politicians, the above should not come as a surprise, however.

Precious time was wasted during the first years of the crisis when the government – and the Bank of Spain – insisted on praising the exemplary solvency of the Spanish banking sector rather than forcing financial institutions to clean up their balance sheets and letting insolvent entities fail. When the problem could no longer be ignored, the Socialist-led government by José Luis Rodríguez Zapatero (with the support of the now ruling center-right Popular Party) opted for the worst possible alternative: to “consolidate” Spain’s banking sector by fusing the cajas.

Perhaps a more disturbing element in the caja’s hangover is the inability to fully account for the damage so far. In March of last year, Spain’s central bank declared that the financial system required an additional 16.1 billion euro to recapitalize and strengthen its solvency. Now the government is asking banks to set aside an additional 30 billion euro in provisions for loans not deemed as problematic. In an attempt to shed more light on the problem and to build confidence in Spain’s fourth banking reform in three years, the government will now hire independent auditors to review the banks’ balance sheets and to appraise toxic assets. Once the audit is completed, the financial institutions’ non-performing real estate assets will be transferred to separate entities.

“Bankia is solvent, the state is fully behind it” – Luis de Guindos

As Spaniards are told that their country’s economic woes are due to their “living beyond their means”, and that implacable austerity measures must be enforced in order to avoid an even more disastrous scenario – even risking euro membership – the bailing out of a politicians’ bank at the taxpayer’s expense only adds insult to injury.

For a government that supposedly defends free market ideals and whose economic policies are designed by a self-declared Austrian School economist, Spain’s Finance Minister Luis de Guindos, Bankia’s nationalization stands as yet another broken anathema, which brings the country a step closer to requesting financial assistance from Brussels.

“[The bailout] will not cost anything to the taxpayers,” stressed De Guindos during last Friday’s Cabinet press conference. When referring to the estimated 15 billion euro the government will end up loaning to troubled banks, the minister said that the state will actually make a profit, as CoCos will yield a 10% interest rate. Ultimately, the government will likely be forced to take a higher stake in the Spanish banking system, as it did with Bankia.

De Guindos was specifically asked about the government’s plans to investigate and identify those responsible for Bankia’s downfall and subsequent nationalization. His poker-faced response was: “we have not identified any responsibility.”

The lack of accountability in the Bankia disaster goes in hand with our politician’s long tradition of not having to recognize their mistakes – and the public accepting such behaviour. Tellingly, in the four months since Rajoy took office as prime minister, the only time socialists and conservatives appeared to have shared a common voice was last week, and it was to support Bankia’s bailout.

Last year, when discussing the causes of the financial crisis, Hernando de Soto, one of the world’s leading economists, told me, “one of the disadvantages of the communist countries was that they constantly disguised their failures, so there was no way to fix the system.” And this is exactly what has happened in Spain’s banking crisis.

Like failure, accountability is an essential principle for the survival of a free-market capitalist system. It is quite dangerous for the political class to continue to hide its mistakes at the public’s expense. If markets are not forgiving when trust is gone, the people, as Greece reminds us, are even less so.