The Iraq War Ten Years After 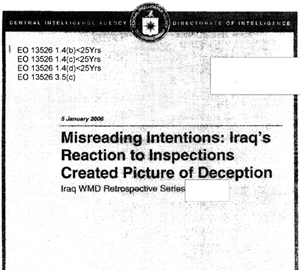 The document, «Misreading Intentions: Iraq’s Reaction to Inspection Created Picture of Deception,» dated January 5, 2006, blames «analyst liabilities,» such as neglecting to examine Iraq’s deceptive behavior «through an Iraqi prism,» for the failure to correctly assess the country’s virtually non-existent WMD capabilities. The review was one in a series of reevaluations the agency produced of its own work after Operation Iraqi Freedom.

The Archive obtained the analysis by filing a MDR request after noticing a footnote to it in a September 2006 report by the Senate Select Committee on Intelligence. MDRs are similar to Freedom of Information Act requests but are more effective in cases where a specific record can be identified, such as by title and date. It took the CIA almost six years to release the report.

The National Security Archive is a non-governmental research organization and library based at the George Washington University. As the government declassifies more such materials in response to our FOIA and MDR requests, we will continue to make them widely available.

Through an «Iraqi Prism»

The CIA’s post-war review faulted agency analysts for not looking at events in Iraq from the standpoint of «a paranoid dictatorship.» Probably the best available intelligence on Iraqi thinking – not to mention Saddam Hussein’s own attitudes – comes from what the deposed dictator himself told the FBI after his capture in December 2003.

Click here to read the transcripts of 20 interviews and five conversations the FBI conducted in 2004 with «High Value Detainee #1.»