Following the 2000-01 crisis, Turkey implemented far-reaching economic reforms, resulting in a significant improvement of economic fundamentals and higher economic growth. Turkey’s economic and demographic weight relative to the EU-27 will increase over the coming decades. However, relatively rapid population ageing, a slowdown in the growth of the working-age population and declining outward migration will limit the “demographic dividend” the EU will reap in case of Turkish membership. While there are many reasons – political, economic and strategic – that make Turkish EU membership desirable for both the EU and Turkey, it would do little to alter the fundamental economic and demographic dynamics of the EU.

In the wake of the “great risk shift”, which saw risk migrate from the emerging to the advanced economies, and given the continued solid medium-term growth outlook in the emerging markets, one finds an understandable degree of enthusiasm in those countries. Turkey is a case in point, having made economic strides over the past decade.

Following the 2000-01 crisis, Turkey implemented far-reaching economic reforms (e.g. floating exchange rate, adoption of an inflation targeting regime and central bank independence, reform of the fiscal policy framework and banking sector reform and recapitalisation). The reforms have significantly improved economic fundamentals and raised economic growth. Average ten-year real GDP growth is running at 4% compared with only 2% in the late eighties and late nineties. Net public debt fell from 70% of GDP (actually higher, pre-GDP revision) to a safe 30% and FX reserve accumulation policy has helped lower net FX liabilities. This has resulted in a decline in interest rates and a sizeable increase in bank lending to the private sector, which doubled from 20% to 40% of GDP over the past decade. 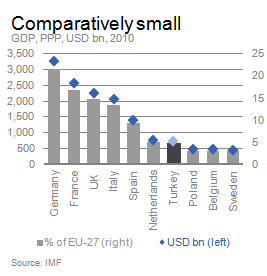 Reasons for accelerated growth include a bounce-back following crises in 2000-01 , a “pay-off” from 1980 reforms (e.g. trade opening, domestic economic liberalisation), a proven commitment to economic stability and structural reforms under a one-party government during the 2000s. It is difficult to disentangle the relative importance of these factors. It remains to be seen to what extent policy discipline will last, should a more fractious multi-party coalition government emerge at some point in the future, absent an external anchor (e.g. IMF, EU accession negotiations).

In spite of continued vulnerabilities and weaknesses, Turkey’s relative economic weight will continue to increase. Turkish GDP currently amounts to less than 5% of EU-27 GDP (in PPP terms). Turkish GDP per capita is 50% of the EU average, up from 40% and 30% one and two decades ago, respectively. Under reasonable assumptions, this share could reach 70% by 2030. This would translate into a Turkish GDP that would just about exceed 10% of total EU GDP. This would leave Turkey as the fourth-largest economy in the EU behind Germany, France and the UK, but likely slightly ahead of Italy. Naturally, the risks attached to the outlook for the “catch up” economies are greater than for the slowly growing advanced economies. Even at its peak in 2050-60, Turkish GDP would, under current projections, not exceed 17% – smaller than Germany’s 22% today. 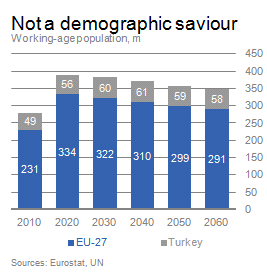 Demographically, Turkey’s population of 73 m is equivalent to 15% of the EU population. While larger than France, Italy and the UK (60-65 m each), it is smaller than Germany (82 m). According to the latest UN projections, Turkey’s population will reach 90 m by 2050 (and gently decline thereafter). At its peak, Turkey’s population share would be equivalent to Germany’s today (17%). The EU is often thought to benefit from a “demographic dividend” in the event of Turkish EU membership. But this is unlikely to be the case. Turkey’s population of working age will increase by a mere 5 and 10 million over the next 10 and 20 years, respectively, peaking at 61 m in 2040. Effectively, the working-age population will remain unchanged after 2025. Net migration has dropped very dramatically over the past few decades from its peak period in 1960-80 and is projected to fall to zero by 2025. This suggests that even if Turkish EU membership were to grant Turkish citizens complete intra-EU labour mobility, the net flow of workers to the EU-27 would be very limited, perhaps non-existent, and completely inadequate to offset the projected decline in the EU-27 working-age population of 10 m per decade.

Turkey’s economic and, much less so, demographic weight relative to the EU will be growing over the coming decades. While there are many reasons – political, economic and strategic – that make Turkish EU membership desirable for both the EU and Turkey, it would do little to alter the fundamental economic and demographic dynamics of the EU – the “great risk shift” and Turkey’s buoyant medium-term growth prospects notwithstanding.

Deutsche Bank Research is responsible for macroeconomic analysis within Deutsche Bank Group and acts as consultant for the bank, its clients and stakeholders. We analyse relevant trends for the bank in financial markets, the economy and society and highlight risks and opportunities. DB Research delivers high-quality, independent analysis and actively promotes public debate on economic, fiscal, labour market and social policy issues.