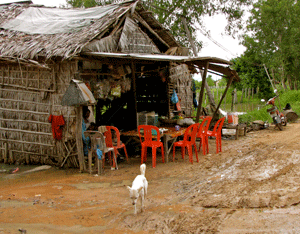 My moments of hope, however, are at times overcome with sheer, burning rage when I consider the most appalling abuse against the children in my life – the lack of value of a human life. You may think this abuser is one of the many sex tourists or pedophiles who flock to Cambodia and lure these children with offers of food or money, and then commit the most atrocious acts against them. I am always suspicious of those lone men travelers since twenty-two percent of them are in Cambodia for sex. You may also think this abuser is one of the many volunteers who prance through orphanages and NGO schools snapping photos, playing with the children, and pretending to be teachers when they have never set foot in a classroom in their own countries. They leave feeling good about themselves because they think that playing with kids for a couple of days actually contributes to making the world a better place. There is also the group of abusers who believes that change moves slowly in Cambodia, and that modern technology and methods shouldn’t be introduced too quickly. Those who think that dusty, open-windowed rooms with a single ceiling fan is enough to keep children dry from a torrential downpour or keep they cool in the suffocating heat, and that they should be grateful for what they get. Fortunately, the children at my school do not have to suffer from those abuses. Despite the geckos scurrying along the walls, they are kept safe, and comfortable, in the afternoons while they study in their classroom or pass their time reading in the library.

Shockingly, the children are the ones who commit the greatest abuse against themselves. It is they who feel that their life is of no value and not as valuable as mine – a person from a “rich” country. This is when I feel rage – not towards the children, but towards whoever or whatever that gave them this sense of worthlessness. This abuser can’t be held accountable or brought to justice, but he can be forced into the shadows to give the children time to make him eventually fade away from their thoughts and their lives. 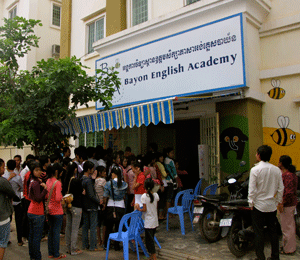 The Bayon English Academy in Cambodia

When I first started my school, the Bayon English Academy, I thought it was a way to provide the children with English language skills so that they could get work in the tourist industry – a much safer and higher-paying alternative than to a life slaving away in rice fields or on a construction site, which would pay them just a single dollar a day for such back-breaking, sun-scorching work. At first, most of the children were incredibly skeptical of our promises – a school completely for free including all the books and supplies in a three-storey building with even an air-conditioned classroom and the most recent language teaching methods and a two-semester curriculum! For them, the poorest, such promises of help are meaningless in Cambodia. Classes, especially at NGO schools, take place in overcrowded, swelteringly hot, dusty classrooms with nothing but a blackboard and planks nailed together in rows for seating, and there is no guarantee that the teacher will show up to teach on any given day.

However, the school has become so much more than just a place to learn a second language to the children. It’s a place where they are confident and have a sense of pride in their accomplishments. One of the young girls studying there is also the school’s librarian. When I first met here, she was one of the quietest girls who spoke in the meekest of voices. However, as she learned how to use the computer database, to process books, and to maintain the library, her voice strengthened in volume. Now, she barks out orders to the other children to behave themselves in the library. Giving her a job where she has responsibility and is held accountable for her work has allowed her confidence to shine through those shadows of self-doubt. Now, she has a sense of worth.

The use of modern teaching methods has also established a classroom rapport in which the children have become close friends with each other. They have been a given an atmosphere where they can talk about their lives, not just their hardships, but also their goals and dreams for the future. There is now solidarity among them. They no longer have to ride their beat-up bicycles home on their own along dark, pot-holed jungle roads, but with another friend from the school. They no longer head to the Angkor temples on the weekend by themselves, but with a group of their friends from the school. Through working together to complete school projects, a sense of competition has emerged amongst them. They now strive to be the best in their class. They have abandoned the nervousness and skepticism they brought into the classroom at the start of the school year. Expecting their best, expecting responsibility, and expecting pride in their work helped them go far beyond those expectations in a matter of months.