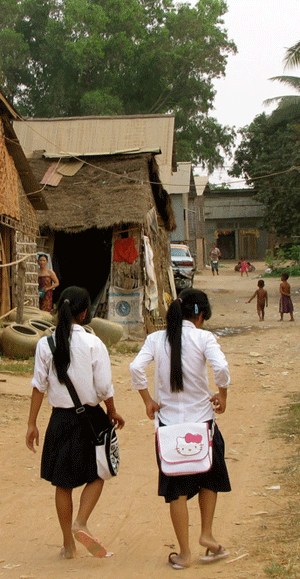 I usually can’t recall the number of times I witness or hear first-hand accounts of abuses toward children by the end of my day in Cambodia. Many of these are invisible to most, but if you look hard enough, they’re everywhere.

There’s my neighbor’s little boy who I see everyday running around his stilt-legged, thatched-roof home next to the potholed, dirt road completely naked and usually on his own in the early morning. I’ll head into town to pick up supplies for my school, and often they’ll be a few street kids chiming “Lady, wanna buy a postcard?” I used to end up with stacks of these at the end of the week when I first arrived in Siem Reap, but I stop buying them once I learned that they were all working for a “handler” who keeps them from going to school and pockets all their earnings for himself. On the weekend, I’ll be riding through the rice-paddied countryside where you can see packs of children carrying machetes longer than their own legs keeping watch over a herd of water buffalo or cattle.

When evening sweeps over the city with its hazy orange sun and purple skies, the abuse only intensifies into the night. One of the restaurants I usually frequent will have seven-year-old girls wander in trying to sell you their partially shriveled up red flowers with their listless, tiny voices. There are also the orphans who make their rounds passing out photocopied pamphlets with blurred photos of their orphanage asking for donations. Finally, there’s the drunk, legless, sun-scorched body of a man who seems to look sixty, but probably forty, paddling around on a skateboard-like contraption with his three-year old girl stumbling along side of him. He uses her to help him beg into the late hours of the night. The customers there on their three-day tours of the ancient temples gorge on their Khmer delights without turning their heads and pretending that poverty is not served up along side their grilled beef with Kampot pepper sauce. On my way home, I drive past the side alleys with their flecks of flickering neon lights. Here, young girls are viciously broken into sexual slavery, and then forced to endure nights of endless rapes and beatings from customers who think they’re simply paying five dollars for a prostitute. There’s always a steady flow of these girls into the brothels: the traffickers scoop them up from the countryside or their families sell them to finance a debt – sometimes for just a mere fifteen dollars. Heading home, along the barely-lit highway, I’ll see the same young boy pushing a wooden cart way beyond his size filled with garbage of all sorts while his baby brother balances on top of the heap of stench.

These are the children who are strangers in my life. I’m powerless to help them. There’s nothing I can do. I can’t remember when it started, but there’s this numbness that has overcome me. Without this numbness, I wouldn’t even walk out the door in the morning. Despite this numbness, it allows me to help those children who are not strangers – the ones that have become part of my life. However, the numbness doesn’t necessarily get me through the day at times. It’s not like I can whiz pass these children on my motorbike, and just be left with a blurry image of them as I drift off into sleep.

The lack of health is the most flagrant abuse I witness among almost all of the children at my school. Their day revolves around helping their parents make enough money to pay for food – a small piece for fish and rice for breakfast and fried egg and another bowl of rice for dinner. There is no such thing as a balanced diet including fruits and vegetables. There are no hot plates that they can plug into an electrical outlet for them. Instead, much time is spent searching through the jungles for firewood to cook their meager meals. Half of their family income goes towards the quest for food each day, so there isn’t even the slightest opportunity to save any of their daily earnings. If they starve today, their savings are useless for tomorrow. Many of the children are up at three o’clock in the morning to help their mothers in the village market. It’s nothing but demanding, dangerous physical labor they toil through every single day. They split coconuts open with a machete and grind out the flesh that often leaves their little hands calloused and criss-crossed with scars. I’m sure all the different rights groups would consider this child labor, but the children and their families have no choice. It’s a matter of survival. You either work or starve. The abuser of their health is a labyrinth of social and economic problems in which it is almost impossible to choose a clear-cut path to escape from it. As a result, this severe malnourishment has stunted their growth and left them with underdeveloped and tiny bodies. A child I would guess to be around eight or nine will often actually be fifteen or sixteen years old.

But at times, I must intervene and pay for their medical costs out of my own pocket when their lack of health has become so apparently poor and threatens their long-time survival. One of our school assistant’s teeth had become so rotten and infected that he could no longer do his job let alone continue his studies. All of the sides of his front teeth were encased in cavities to the point that you could only see specks of the remaining white bone. His back teeth were also rotting in the company of his infected gums. The infection had gotten so bad that he could no longer even eat his daily rations of rice. Sugar cane juice was his only nourishment. These teeth will not only lead to a slow, painful demise of his overall health, but also destroy any chance of getting a decent paying job in the future. People will always see his rotten teeth rather than his incredibly sociable, hard-working character. After over ten visits to the village dentist who practices along side of a dirt road with only a partial glass window to shield his patient’s chair and instruments from the dust, our school assistant is now a completely different young man. He smiles everyday with the greatest confidence, and believes he can take on the world. He has such great hope for himself now. My hope is much more slight. It’s often a fleeting moment, but there’s a glimmer that he now has a chance because of better health.