The role of the intra-euro payment system (Target 2)

Since EMU has been built as a union of sovereign states, each state has retained its own national central bank, which has become a member of the so-called Eurosystem with the ECB at the top. National inter-bank payment systems have been merged into a euro-area interbank payment system (Target2), where national central banks have assumed the role of the links between countries (see our article of June 8, 2011 for a description). A key consequence of this system is that each euro-area country has a national balance of payments in the form of the net position of its central bank within Target2. This net position can result in a claim (balance-of-payments surplus) or liability (balance-of-payments deficit) against the ECB, which is the heart of the payment system.3

The consequence of this system is that a country with a balance-of-payments deficit automatically receives unlimited funding. Take the example of a country which, due to an overvalued internal real exchange rate and a large government budget deficit, has a current account and a capital account deficit (with the latter due to capital flight as residents exchange overvalued domestic assets against foreign assets). As the banks extend credit to an over-indebted government and an uncompetitive private sector they are considered unsafe and are therefore cut off from private sources of funding. To ensure solvency, the banks in this country receive credit from their national central bank, which acts on behalf of the ECB. Thus, reserve money flows from the ECB to fund payment outflows induced by the current and capital account deficits. While banks in the country with the overvalued internal real exchange rate rely primarily on their national central bank and the ECB for funding of their balance sheets, banks in the country with the undervalued exchange rate that receive the payments have plenty of liquidity and therefore do not need ECB funds. Hence, the ECB’s funding operations become tilted towards the countries with overvalued exchange rates.4

Chart 1 above shows the credit extended by the ECB to euro-area banks under its standard and longer-term refinancing operations. Note that with the intensification of the euro crisis the share of credit going to Greece, Ireland, Italy, Portugal and Spain (GIIPS) sharply increases. As banks in these countries were increasingly shunned as borrowers by banks in other euro-area countries, they had to rely on the ECB to fund their assets. 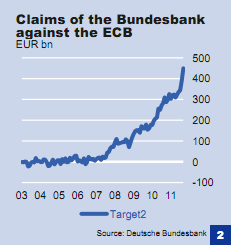 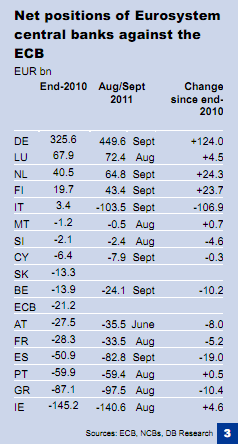 Table 3 shows net claims and liabilities of Eurosystem central banks against the ECB for the end of last year and the latest available observation. Balance-of-payments imbalances (reflected in these positions) have further increased in the course of this year. The most significant deterioration occurred in Italy, where a small net surplus of EUR 3.4 bn turned into a large net liability of EUR 103.5 bn. With the Italian current account balance vis-a-vis the euro area having changed only little during the first half of this year, the deterioration reflects a rapidly rising deficit in the capital account. This was due to a shift in funding of Italian banks from private sources to the ECB as other euro-area banks became reluctant to lend to their Italian counterparts and the Eurosystem stepped into sovereign debt markets. As can be inferred from the table, surplus countries have so far extended balance-of-payments credit in the amount of EUR 630 bn to the deficit countries. This comes in addition to any credit extended directly by governments and the ECB through its Securities Markets Programme (SMP).

The capital account and subsequent balance-of-payments imbalances reflected in the Target2 balances have contributed to a sharp widening of relative foreign net asset positions among euro-area countries. As Chart 4 shows, Germany has acquired more net foreign assets while all other countries have incurred net foreign liabilities. Target 2 balances seem not only to have substituted for existing funding sources, but to have added to the net foreign asset positions (although it is not clear to what extent the rising divergence in positions is due to changes within the Eurosystem and between the respective countries and rest of the world).