The promise of a hard currency union

Most Germans watched the creation of EMU with highly mixed feelings. Many economists and the highly respected Bundesbank warned that a stable monetary union was only possible as the crowning achievement of full European economic integration and a political union. On the other hand, many politicians, including Chancellor Kohl, in the early 1990s saw the need to establish a firm time table for EMU so as to anchor the united Germany in Europe and help to appease fears of neighbouring countries, especially France, that Germany would turn its back on the EU. To reduce German concerns about the stability of an EMU that would come before, or even without, political union and ahead of a deeper integration of European economies, politicians constructed the ECB in the image of the Bundesbank (including putting it physically into Frankfurt) and reassured the German public that the euro would be as hard and stable as the D-Mark. Moreover, politicians promised that German tax payers would never have to give financial support to other EMU countries in financial trouble. The principles of a hard currency union, where members would be held fully liable for their government finances, were enshrined in the Maastricht Treaty, on which EMU was based. In addition, governments concluded a “Stability and Growth Pact” (SGP), which was to ensure fiscal discipline of EMU members. 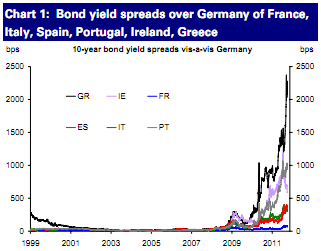 The successful launch of EMU came at a time when interest rates globally fell to record lows and investors developed a strong appetite for fixed income securities. As a result, yields on government bonds of EMU participants converged at a low level, close to that of Germany. Initially, ECB officials expressed concern about the markets’ ignorance of different default risks of EMU sovereign debt, but these concerns were ignored and subsequently no longer voiced by the ECB. In fact, the ECB’s uniform acceptance of EMU sovereign debt as collateral in its refinancing operations with banks and regulators’ uniform zero risk-weighting of sovereign debt in banks’ balance sheet and its exemption from prudential lending limits promoted the convergence of yields. Eventually, ECB and government officials saw the narrowing of yield spreads as welcome sign of successful financial integration in the EMU. 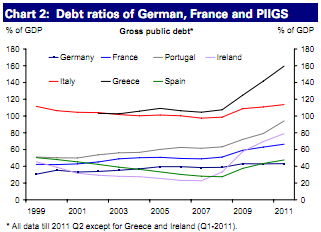 However, the decline in yields created a false sense of security among EMU member governments and seduced them to careless borrowing. Article 125 of the EU Treaty, which prohibits the EU and individual countries from assuming the liabilities of other countries, was seen as irrelevant in practice and hence lacking any credibility. The violation and subsequent bending of the SGP by Germany and France in 2003-04 unmasked this instrument for fiscal discipline as a paper tiger and demolished the last remaining weak safeguards against over-borrowing. 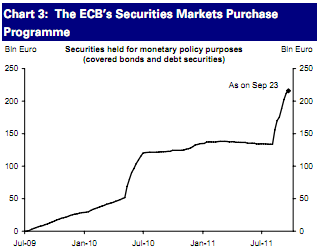 With the burst of the real estate price and credit bubble in 2007 it was only a matter of time until markets exposed the over-borrowing of some EMU member countries. The admission of the Greek government in the autumn of 2009 of a huge deficit and false reporting of fiscal data for many years then triggered a public debt crisis in the euro area that has mutated into a full-blown crisis of EMU. Belatedly, markets are treating almost all euro area sovereign debt, with the exception of that of Germany, like private credit, i.e., subject to the possibility of default, and are demanding corresponding risk premia. But debt levels of almost all EMU countries are too high to allow default without potentially severe implications for the financial system. Hence, when private sector funding of maturing government debt and deficits dried up, the public sector had to step in. As long as only small, peripheral EMU member countries were cut off from private capital markets, financial support could be arranged from other, larger countries with more solid government finances. However, when markets began to avoid Italian sovereign debt, only the ECB had enough financial fire power to provide a credible backstop against a seizing-up of the Italian bond market.