Income and wealth taxes in the euro area: An initial overview

[VIDEO] The Greek People Never Agreed to the Debt or Austerity

We see these articles all the time in the media about how much the poor are getting screwed by the rich. Today the Wall Street Journal had an article on a report from The Boston Consulting Group which was entitled, «Millionaires Control 39% of the World’s Wealth».

These statistics really mean nothing. It is such an obvious observation that rich people control most of the wealth. And, so what.

There is a popular idea in the world’s consciousness that there is a fixed amount of wealth and that the poor are denied access to it because of greedy rich people. As the author of the above article stated:

Still, the data supports a trend we have been seeing for years: the rise of the global, winner-take-all (or most) economy.

That is certainly true in non-capitalistic societies where the power of the state is used to control the masses for the benefit of a few oligarchs. Most of these countries are commodity or food exporters ruled by oligarchs or dictators. Wealth is mostly stolen.

In capitalistic countries wealth is created,not stolen. Entrepreneurs have an idea, have a relatively free political infrastructure, have access to capital,are willing to take risks,and create a business. They either crash and burn or succeed. If they succeed they create jobs and wealth. They also create wealth for the entrepreneur. Congratulations. Where else do jobs come from?

If you look at the data the Boston Consulting Group provides, the reasons for the disparity are pretty obvious: 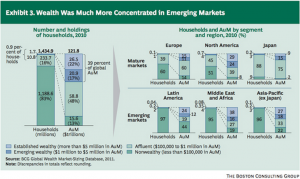 Which way is the U.S. going?

As the late, great James Brown said, «I got mine, don’t worry about his».