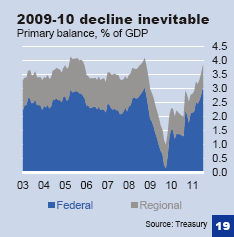 Overall, the various changes diminish transparency. At this point, none of these changes poses a risk to fiscal sustainability and continued debt reduction. While in some cases good arguments no doubt exist (excl. Petrobras from PS), in others the reasons are less convincing. Above all, these changes are unnecessary. Analysts do their own calculations adjusting their figures for the changes introduced by the Treasury. These changes only serve to reduce transparency. Moreover, if the government is confronted with a sharp economic slowdown (2009), nobody expects it to meet its primary surplus target. On the other hand, if the government is at risk of missing its target during an economic upswing (2010), changing the rules will fool nobody. The government would be better off modifying its fiscal rules by upgrading its target from a headline primary surplus target to a cyclically-adjusted target in the first place. 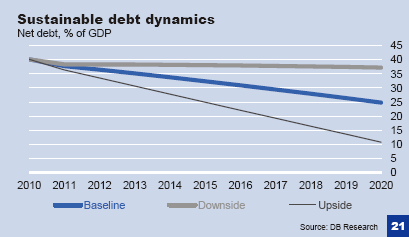 How will government debt evolve over the next few years?

A back-of-the-envelope calculation suggests that the net debt ratio will continue to decline for the foreseeable future. An average real interest rate of 6% and a real GDP growth rate of 4% require a primary balance of only 0.8% of GDP to stabilise the debt ratio at its current level of 40% of GDP. The current primary surplus target is 3.2% of GDP.

On current trends, net public sector debt will fall to 30% of GDP by 2017. This assumes an unchanged primary surplus, annual real GDP growth of 4% and average real interest rates of 5%. It also assumes an unchanged real exchange rate. This looks like a slightly optimistic scenario given considerable short-term infrastructure investment needs (World Cup 2014, Olympics 2016) and the political temptation to reduce the primary surplus as debt moves towards the 30% mark. Nonetheless, even under a more adverse scenario, net public debt would continue to decline. The key question is whether the authorities will be able to resist political pressures for greater spending (and a lower primary surplus) as the net debt ratio continues to fall.

Back-of-the-envelope calculations, while simple, overestimate the speed at which the net debt ratio will decline. Applying the average Selic rate to the net debt stock (or even its LCY component) under-estimates interest payments. The average weighted interest rate paid on the net debt stock can be derived from the net debt composition. The PS pays an average effective nominal interest rate higher than Selic. Here is why. The PS receives (roughly) TLJP on its BNDES loans, while paying Selic. Leaving aside exchange rate changes, the public sector also faces a negative carry on its FX reserve holdings. On the other hand, 4.7% of GDP worth of debt is interest-free (monetary base). Adding all up results in an effective nominal interest rate about 200 bp higher than Selic, assuming a largely unchanged asset and liability structure and an unchanged real effective exchange rate.

In order to estimate the path of gross domestic government debt, it is necessary to make further assumptions pertaining to public sector asset accumulation, including its effect on real interest rates. Our projections suggest that net public sector debt will fall below 30% of GDP by 2017. The evolution of gross GG debt will critically depend on the pace of FX reserve accumulation and further Treasury lending to the BNDES. We expect the pace of both FX reserve accumulation and (more so) Treasury lending to the BNDES to slow over the next few years. Assuming a nominal deficit of 2% and nominal GDP growth of 10% and PS asset accumulation worth 4% of GDP, we project gross GG debt (old definition) to decline to 46% of GDP by 2020. Assuming an unchanged fiscal stance, net debt could fall to as low as 25% of GDP by 2020. By comparison, the IMF projects gross GG debt (old definition) to fall from currently 67% of GDP to 57% of GDP by 2016 and net PS debt to fall to 33% of GDP by 2016 (vs our forecast of 31% of GDP). 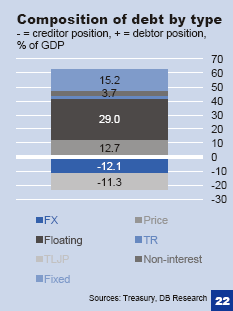