Not only has gross government debt (under the new definition) remained largely unchanged, fluctuating in the 55-60% of GDP range since late-2006, but domestic debt has actually risen during this period from 51% of GDP to 54% of GDP. This happened in spite of, by Brazilian standards, strong economic growth, averaging 4.5% in real terms. The unchanged debt ratio is almost entirely attributable to the accumulation of assets financed by domestic debt issuance. Loans to the financial public sector (mainly: BNDES) and central bank foreign reserve assets account for the lion’s share of asset accumulation. Credit to public-sector banks increased from 0.5% of GDP at end-2006 to 7.3% of GDP in August 2011. During the same period, the stock of FX reserves grew from 8% to 15% of GDP. In dollar terms, the BCB accumulated more than USD 270 bn in additional FX reserves since 2007. Roughly speaking, leaving aside the question whether it has been financed by repos or Treasury issuance and excluding the “carrying costs”, this added 7% of GDP worth of debt to the gross domestic debt stock. All other things equal, gross domestic government debt would be roughly 15% of GDP lower than it is today, had the government not extended loans to official banks and not accumulated FX reserves since 2007. In other words, gross domestic GG debt would be closer to 40% of GDP had no further asset accumulation taken place.

The accumulation of public sector assets financed by public sector liabilities is worth having a closer look at. As regards FX reserve accumulation, the marginal economic and financial benefits of accumulation are, initially, significant in terms of lowering risk premia and foreign borrowing costs, including those of the private sector, and in terms of reducing economic and financial volatility (sus-ceptibility to both endogenous and exogenous shocks).

However, leaving aside the gains and losses resulting from currency depreciation/appreciation, the public sector incurs a financial loss. The interest rate paid on the domestic liabilities issued to finance FX reserve accumulation is greater than the interest received on its FX assets. The so-called “negative carry” is greater than 1,100 bp at the moment (roughly: Fed funds rate minus Selic). The public sector incurs losses, leaving aside currency-valuation-related gains or losses, worth 1.0-1.5% of GDP every year. Again, this can be considered an insurance premium paid to protect the economy against disruptive shocks and an indirect subsidy to the private sector in terms of cheaper external borrowing. 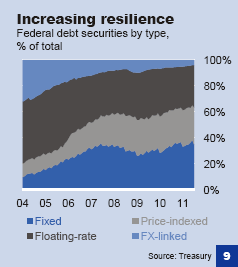 Similarly, as regards lending to public banks, the Treasury lends at TJLP (taxa de juros de longo prazo or long-term interest rate) but has to finance the loan at roughly Selic, resulting in a negative run rate of currently more than 500 bp. This roughly translates into a loss of more than 0.3% of GDP (roughly: 500 bp x 7% of GDP). The TCU federal watchdog has recently put the fiscal cost at 0.35% of GDP. True, to the extent that BNDES makes a profit by lending at a rate higher than TLJP and, ultimately, pays dividends to the Treasury, the effective loss (assuming zero credit losses incurred by BNDES) will be slightly smaller. Again, this holds in strictly financial terms and does not take into account the non-financial benefits in terms of broader, generally difficult-to-quantify growth and development objectives.

That said, in terms of FX reserves, the public sector looks “over-hedged”. The public-sector is a net foreign (currency) creditor to the tune of 10-12% of GDP. Foreign gross GG debt currently amounts to a mere 2.4% of GDP. This strongly suggests that the additional economic and financial benefit derived from additional FX reserve accumulation does not compensate for its fiscal costs. (This suggests that continued FX reserve accumulation is driven by other concerns.) A similar argument applies to the accumulation of Treasury claims on public-sector banks. Initially being a response to the credit crunch in 2008, public-sector-backed lending represented an economically and politically opportune way to support growth in the context of a severe credit crunch. Today the continued increase in lending comes at a tangible fiscal cost and it is arguable whether the non-financial benefits resulting from it offset the financial losses incurred by the Treasury. It would seem more sensible for official banks to raise the needed financing in the market rather than rely on the Treasury for funding.