Brazil has come a very long way since 2002 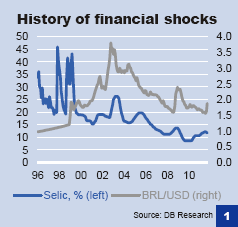 Brazil suffered a series of major financial crises over the past three decades. Massive foreign borrowing in the 1970s followed by the so-called Volcker shock (read: high US interest rates and US recession) triggered a precipitous decline in commodity prices and eventually forced Brazil into external default. A great many stabilisation plans during the second half of the 1980s and early 1990s failed to bring spiralling inflation under control. After the real plan succeeded in doing so, Brazil suffered several subsequent balance-of-payments crises. In 1998-99, after a period of heightened global risk aversion following the Russian default, large-scale capital outflows forced Brazil off its crawling currency peg. A major contributor to and/or accelerator of both the 1998-99 and 2002 crisis were rising government debt and a debt structure, notably large shares of FX- and Selic-linked debt, that amplified financial shocks. Not only did the public debt structure make Brazil more vulnerable to both endogenous and exogenous shocks. But a high level of debt repeatedly forced the government into pro-cyclical fiscal and monetary tightening, exacerbating economic downturns. 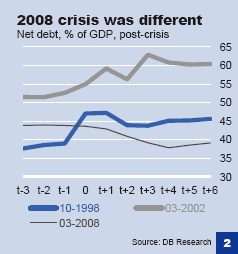 Since the last major crisis in 2002, Brazil’s financial resilience has increased dramatically. The 2008 global crisis proved Brazil’s new-found financial resilience. Its solid external solvency and liquidity position (notably large FX reserves) was instrumental in allowing Brazil to weather the crisis – financially and economically – relatively unscathed. Lower public debt and a net foreign-currency creditor position at last severed the nefarious link between balance-of-payments-shocks-cum-currency-depreciation and public sector debt sustainability. It not only allowed the government to let fiscal stabilisers soften the economic downturn but it even allowed it to provide counter-cyclical fiscal and monetary stimulus. Thanks to the public sector’s and the economy’s net FCY creditor position, the government was also able to let the currency depreciate without triggering the systemic financial stress in the public, financial or corporate sectors related to FCY mismatches. 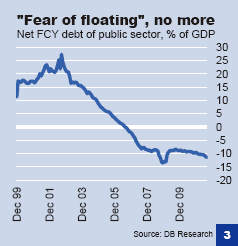 Brazil has come a long way indeed in terms of public sector debt sustainability, that is, solvency, liquidity and sensitivity to shocks. First, public debt is at very manageable levels. In net terms, public debt amounts to slightly less than 40% of GDP, compared to more than 60% in 2002. Second, its dependence on private foreign financing, whether international bond markets or foreign buying of domestically issued debt, is small to negligible. FCY-denominated/ -linked debt amounts to less than 3% of GDP. Non-resident holdings of domestic LCY debt amounts to a relatively modest 5% of GDP. Third, the aggregate (public- and private-sector) external balance sheet has removed the long-standing “fear of floating”. Thus a flexible exchange rate allows Brazil to absorb external shocks more easily than in the late 1990s and early 2000s when policy-makers were frequently forced to respond to external shocks with massive monetary tightening in an attempt to limit excessive currency depreciation, which, in turn, was threatening to further undermine debt sustainability. Today, a 10% nominal depreciation reduces the net public sector debt ratio by 1% of GDP. At the height of the global financial crisis in late 2008, net public sector debt had dropped by a full 5% of GDP, largely as a result of the public sector’s net FCY creditor position. In short, Brazil’s public debt position is quite solid. 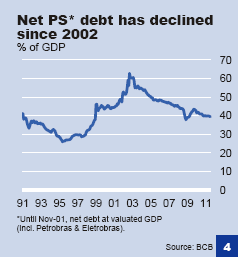 After repeated financial crises in the 1990s and early 2000s, Brazil managed to put its fiscal house in order and reduce the public debt burden thanks to large primary surpluses and improved economic growth – and despite very, very high real interest rates of 10% or more. Brazil traditionally uses the public sector (PS) primary surplus to measure its fiscal effort. Following the return to low inflation during the second half of the 1990s, the public sector’s fiscal position deteriorated sharply due to a declining “inflation tax”. The primary balance was raised significantly in the wake of the 1998-99 financial crisis and again in the wake of the 2002 capital account crisis. The fiscal adjustment during the first year of the Lula administration was decisive in that it led to a near-continuous decline in net public debt, thus putting government debt dynamics on an unambiguously sustainable path. 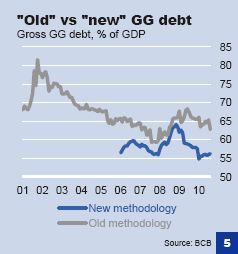 Net public sector debt1 spiked to 63% of GDP in September 2002 at the height of the balance-of-payments crisis, mainly on account of sharply depreciated BRL and, somewhat less so, a widening fiscal deficit. Almost 50% of the public debt was linked to denominated in foreign-currency or linked to the Selic rate (if one accounts for central bank swaps). Since then, debt has been gradually declining and today stands at just below 40% of GDP. The ratio even dipped to below 36% of GDP at the height of the 2008 financial crisis when – thanks to the public sector’s long FCY creditor position – the sharp devaluation of the BRL led to an improvement in the net public sector debt position.