Any Greek Restructuring Should Be Designed To Trigger A Credit Event

Everything You Wanted to Know About Credit Trading, But Were Afraid to Ask

As all of Europe is focused on avoiding a “Lehman Moment” and US stocks rally on the hope that some convoluted plan is devised to avoid default and Credit Events at any cost, I still can’t help but think the focus is misplaced and will do more damage than good.

Over the past few months, the CDS of Ireland and Portugal have diverged. Ireland and Portugal were neck and neck in a race to become the next Greece. Recently Ireland has improved, and although being only as bad as Italy is a somewhat dubious goal, there has been improvement. Is there any chance it is because they allowed 3 financial institutions to experience Credit Events? Allied Irish, Irish Life & Permanent and Bank of Ireland all had Credit Events. They settled without a problem, as is the norm (in spite of all the talk about CDS and Lehman, the CDS with Lehman as a counterparty settled using the ISDA “replacement” methodology, and all CDS with Lehman as Reference Entity also settled without a hitch). Is it a coincidence that Ireland, the sovereign credit, did better once it let these institutions experience a Credit Event? I don’t think so. Is Ireland functioning better without this burden taking time and acting like an anchor around its neck? Yes! 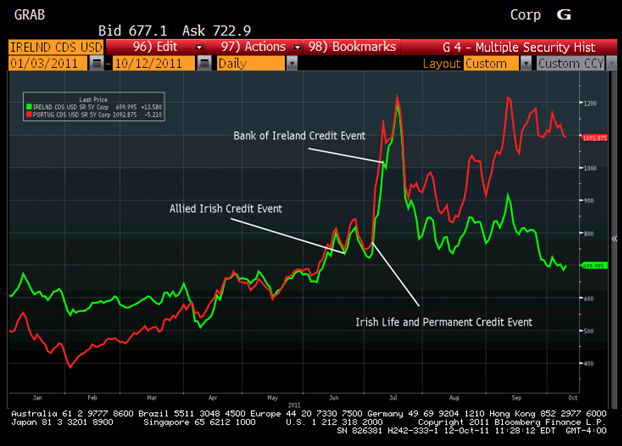 Well, this must be an isolated case, right? Wrong. Here is what happened to Iceland. 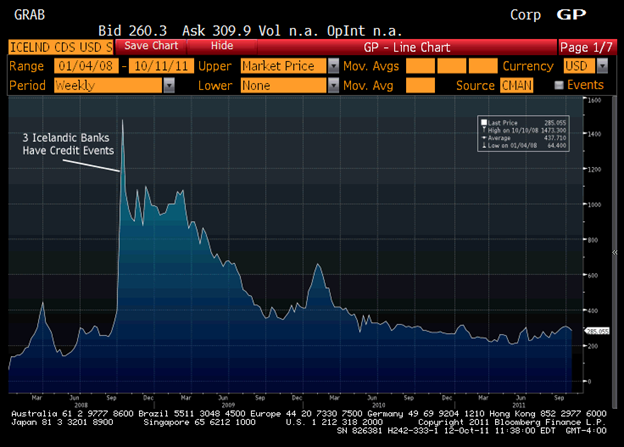 Iceland as a country was deemed to be in deep trouble by the CDS markets. After the 3 banks failed it briefly got worse. Then guess what? It got better. Iceland didn’t support the banks, they didn’t give up sovereign funds for that, and instead it started the process of rebuilding and is almost back to where it was when the whole crisis started. Virtually no other country trades tighter than it did in early 2008.

The story in the U.S. is harder to decipher. One story that can be explained by the data is that the US CDS reacted slightly negatively to the default of Lehman. The spread increased as the government bailed out AIG (by paying off the banks) and then increased dramatically after it became fully committed to never letting a bank fail. It is curious that not once since the government caved in to completely support banks at any cost, has the CDS traded as tight as it did in the week AFTER Lehman. For all the talk about the “Lehman Moment” maybe what we should be trying to avoid is the “Can’t Let a Bank Fail Moment”. 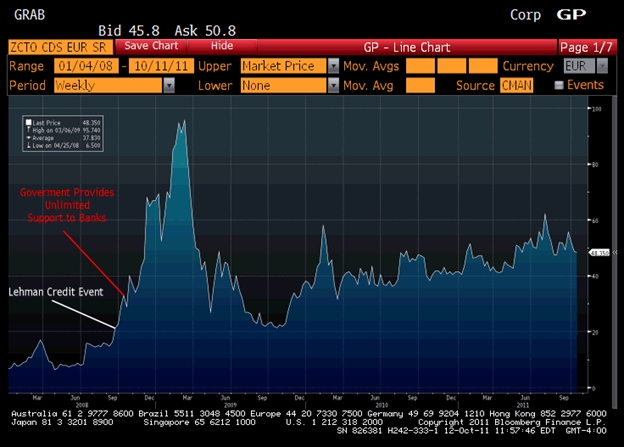 I am becoming more convinced that the “Lehman Moment” phrase has taken over and there is no rational thought of whether Lehman was merely a catalyst, a catalyst that was inevitable (if it wasn’t Bear, and it wasn’t Lehman, and it wasn’t Fannie, and it wasn’t AIG, it would have been something). Maybe the moment we should be trying to avoid is the one that allows weak institutions to exist. The weak institutions do not provide loans because they are too afraid of losses since they mainly survive by the good grace (and money) from governments at central banks. That is bad enough, but they crowd out new money. Who is going to go after markets where even a sleepy BAC could briefly wake up and crush you before you ever got started? I have heard of some interesting companies out there trying to provide loans to those who need them, but they can’t get any traction. Too Big To Fail aren’t too sleepy to allow potential competitors to grow.

Stocks can rally. Lehman Moment can be said 500 times today. Every politician can worry about the impact of triggering CDS. Every banker can claim the world would end if they are made to pay for their bad decisions. In the end, Iceland and Ireland both improved only AFTER they let banks fail. The US, for all the talk about Lehman, is only doing worse than that since it decided banks couldn’t be allowed to fail.