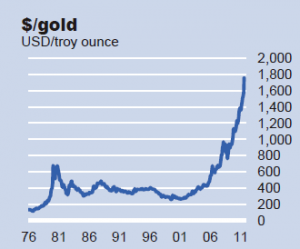 The desperate attempt to avoid an economic crisis caused by the necessary de-leveraging could eventually lead to a crisis of the fiat money system itself. On August 15 this year, the fiat money system celebrated its 40th birthday. Since Nixon cut the dollar’s link to gold on August 15, 1971, the dollar has depreciated by 98% against gold (see chart). Depreciation came in two stages: First during the 1970s, when the excess supply of US Dollars created towards the end of the BW-System and at the beginning of the new fiat-money system boosted consumer price inflation, and secondly after the implosion of the credit-driven ?Great Moderation? as of 2007, when bad assets started to move from private sector via public sector to central bank balance sheets.

When fiat money fails it may well be replaced by money backed by real assets that cannot be augmented with the stroke of the pen of central bankers. How could this happen? One possibility – which at present may sound a bit like science fiction – would be for China and other big EM countries to peg the value of their currencies to a basket of commodities. It would then be up to the industrial countries to try to stabilize their currencies against the Yuan, or accept the inflation that goes along with secular depreciation.

Modern macro- and financial economics are based on the belief that economic agents always hold rational expectations and that markets are always efficient, in other words, that the earth is flat. We now find out that this is not true. There are elements of irrationality and inefficiencies in the behavior of people and markets. Therefore we need to dump the flat-earth theories promising that economic and financial outcomes can be planned with a high degree of certainty and need to look at other theories that accept the limits of our knowledge about the future. A revival of Austrian economics could be a good start for such a research programme.

Unfortunately, however, the battle cry of the public and politicians is for more regulation: regulate banks, regulate markets, regulate financial products! But those who push for blanket regulation suffer from the same control-illusion that got us into this crisis. In our view, instead of more regulation we need more intelligent regulation. At the heart of such regulation must stand the simple recognition that we can at best tentatively plan for the future and must feel our way forward in a process of trial and error.

In a world where we need to reckon with «unknown unknowns» – in a world where Knightian uncertainty reigns – financial firms and investors need larger buffers to cope with the unforeseen, i.e. more equity and less leverage. In a world, where markets are not always liquid but can seize up in a collective fit of panic, financial firms and investors also need a greater reserve of liquidity. Regulation can help to achieve both objectives, but it needs to realize its limits. Regulation will create a false sense of security, unless firms and investors have the incentives to follow sound business practices. The best incentive to do so is to make failure possible. Hence, we need effective resolution regimes for financial firms.

In a world where people have imperfect foresight and do not always behave rationally, and markets are not always efficient, we need to accept that economic policy cannot fine-tune the cycle. All that policy can do is to lean against excessive exuberance and depression during the credit cycle and help avoid the excessive swings of risk appetite that we have seen over the last 10 years. It is unhelpful to pro-actively manipulate the market rate to achieve certain economic growth objectives. Instead we should try to create the conditions for a steady development of credit by allowing the market rate to closely follow the natural rate. When accidents happen, we need to prevent that «fear of fear itself» perpetuates economic crises by ensuring that the banking system is capable to satisfy the demand for credit.

Finally, economists should be more humble. For too long we have tried to be like natural scientists. Like they we like to develop our theories with the method of deduction – start from a few axioms and describe the world in mathematical terms from there. This was a little presumptuous, to say the least. We need to realize that we are to a significant extent a social science. Social scientists, like historians, use the method of induction. They observe, and then develop tentative descriptions of the world from these observations. Because we did not pay enough attention to economic history and relied heavily on formal models of the economy we repeated a number of the mistakes that caused the Great Depression.

Published by kind permission of the author.