The 1987 stock market crash was the first application of the proactive use of monetary policy. To fend off recession risks, Greenspan cut interest rates. The therapy worked and instead of decelerating the economy accelerated during the late 1980s. The next occasion to apply the Greenspan method came in the wake of the savings-and-loans-crisis at the end of the 1980s, which contributed to the recession of 1990-91. Again, the Greenspan Fed cut interest rates to support the economy and again succeeded in mitigating the downturn. In the following years, the Greenspan method was applied again to fight the Asian emerging market and LTCM crisis of 1998 and again when the dot.com bubble burst in 2000-2002. Until the great financial crisis that began in 2007, it seemed that the Greenspan method, the pro-active use of monetary policy to fine-tune economic developments, had succeeded in abolishing the business cycle as we knew it. Thanks to the art of central bankers, the age of the Great Moderation had arrived. 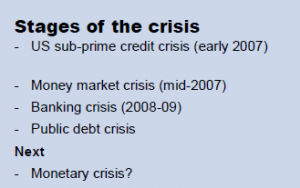 The great financial crisis that erupted in 2007 uncovered the Great Moderation as a great illusion. Nevertheless, the old reflexes led to the combined deployment of monetary and fiscal policy on a so far unprecedented scale. As the excessive leverage built up in the illusory age of the Great Moderation was unwound, the crisis moved from the US sub-prime mortgage sector to the money markets, the banking sector and more recently to the public sector (see chart). The principle has been to shift the unbearable burden of debt from weaker to stronger shoulders and lower debt service costs through monetary policy induced interest rate cuts. But in this process the previously strong shoulders have also been weakened. Somehow the old tricks seem to have lost their magic, and the crisis triggered by massive de-leveraging appears to be getting out of control.

What was the major flaw that led us into this crisis? The belief that even in a world of uncertainty economic and financial outcomes could be planned was in our view a major contributor. The assumptions of rational expectations and efficient financial markets laid the ground for overconfidence in the ability of policy makers, firms and individuals to successfully plan for the future despite the uncertainties surrounding us.

At the macro level, rational expectations and efficient markets theory laid the ground for inflation targeting by major central banks, which replaced the monetary targeting of the early 1980s. The economy was expected to grow in a steady state, if only the central bank ensured stable and low consumer price inflation. The overconfidence in the power of the central bank led Paul Krugman to claim in the late 1990s:

«If you want a simple model for predicting the unemployment rate in the United States over the next few years, here it is: It will be what Greenspan wants it to be, plus or minus a random error reflecting the fact that he is not quite God.»

When individuals had rational expectations and markets were efficient there was no need to worry about asset markets or regulate financial markets. After all, how could central banks or regulators know more than the market when market prices reflected all available information about the future? Anyone questioning the wisdom of the ruling paradigm was regarded as old-fashioned by the academic cardinals of the Church of Anglo-Saxon economics, which has reigned supreme. In retrospect, it seems a bit odd that academics overlooked financial markets’ obsession with central banks and the cult status they awarded central bankers. How could financial market participants hang on the lips of central bankers, when they so efficiently processed all available information in real time? But economists were too enamored with their theories to dwell much on such oddities.

At the micro level, rational expectations and efficient markets theory laid the ground for many highly leveraged financial products and risk management. Financial market participants saw only «known unknowns» that could be quantified with probability theory. In a world of «known unknowns» they felt that there was little need for contingencies for the truly unforeseen, the «unknown unknowns».2 Hence, it seemed fully appropriate to raise leverage to the extreme. After all, risk managers could calculate continuously and real time the value that could be lost when the unknown happened. The feeling of being in control – of being able to plan ahead with good, if not perfect, foresight – laid the ground for the extremely high leverage that was built into financial products and the balance sheet of financial firms.

After the burst of «control illusion»

The collapse of these theories enforces the radical reduction of leverage. If we cannot anticipate the range of future outcomes with a relatively high degree of certainty, we need more slack and buffers in the system for unforeseen events, and hence cannot afford high degrees of leverage.

The helplessness of the economic profession in the face of the present crisis manifests itself by the recommendations of prominent economists for ever-stronger incentives for a renewed increase of leverage. They advise that fiscal policy turn expansionary again, central bank policy rates be kept at zero for a long time, and central banks purchase financial assets.